It has been suggested by credible high-ranking intelligence directors that it is likely that several foreign governments possessed the capabilities to hack and non-government computer.

Therefore, it may be likely that Hillary Clinton’s email server was hacked by foreign intelligence and they have the ability to selectively disclose potentially compromising information to derail her presidential candidacy, or even worse, blackmail her while she is in office.

Or, as suggested by internet entrepreneur Kim Dotcom, other non-government hackers may also have compromised Clinton’s email server.

Kim Dotcom: Julian Assange Will Be ‘Hillary’s Worst Nightmare in 2016′

Kim Dotcom, the founder of Megaupload, said in an interview this week that the 2016 presidential campaign could become a clash of titans over the issue of transparency. Kim says Julian Assange, the founder of Wikileaks, will create “roadblocks” for Hillary.

As for why Kim and Assange might feel antipathy toward Hillary, Kim explained, “Hillary hates Julian… she’s just an adversary of, I think, internet freedom.”<Source>

The most likely scenario is that Julian Assange and Wikileaks would serve as a conduit for disclosing information from other hackers who accessed Hillary’s email server. Both Dotcom and Assange have reasons to hate Hillary Clinton and the State Department.

A stunning lack of judgement on the part of Hillary Clinton …

“I think that foreign intelligence services, the good ones, have everything on any unclassified network that the government uses,” Morell said Friday in an interview on the Hugh Hewitt Show. <Source>

Megyn Kelly asked Flynn whether he believed Mrs. Clinton’s claim of absolute security for her private server on which all her State Department emails were supposedly kept.

The top intelligence official who served for two years under Obama said he did not believe that claim, saying it’s “likely” Mrs. Clinton’s email server had been hacked, possibly by America’s enemies.

If that happened, of course, it could mean that sensitive national secrets were exposed because of Hillary Clinton’s extraordinary use of computer equipment under her control and direction. <Source>

So where is the NSA, FBI, and other agencies in investigating the threat?

One would assume that, as a government official  and holder of a security clearance, Hillary Clinton would be subject to the same rules that apply to real or imagined security breaches. That her email server would be forensically examined “in situ” to see what hardware, operating system, and application vulnerabilities exist, what communications protocols were used, and which intermediary internet service providers handled Clinton’s email traffic.

And, where are the subpoenas for Hillary’s top-level confidants such as Chief of Staff Cheryl Mills and Huma Abedin, who are also said to have used Hillary Clinton’s email server for their own activities while at the State Department?

The Clintons: bent beyond belief …

Hillary and Bill Clinton are so twisted and warped – mired in allegations of corruption, cronyism, and criminality – that they should never be given access to the White House as visitors let alone second-time occupants.

The progressive socialist democrats who allow Hillary Clinton to assume the frontrunner position for the nomination for the President of the United States represent a clear and present systemic danger to America and all Americans.

And, it is equally dangerous to consider Hillary Clinton a viable and credible candidate as she simply stands there, silently, letting her acolytes defend her and spin her lack of accomplishments and lack of experience; full well knowing that her billion-dollar war chest has already secured the services of those who might support opposition democrats, and having a tight grip on the progressive socialist democrat party apparatus.

What does it really mean when a multi-millionaire with a history of political corruption, cronyism, and lying tells you that they are all about equality and social justice?

The warped view of Hillary Clinton … 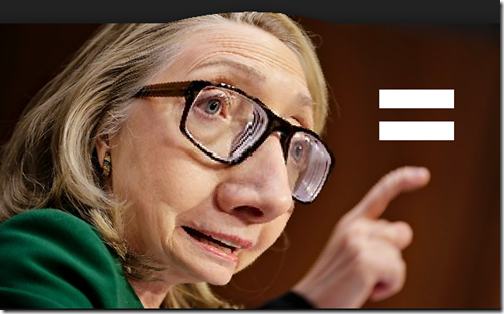 Especially when she is a progressive social democrat whose party has governed the inner cities for decades with little or no improvement in the infrastructure, poverty, education, jobs, and medical care?

Where law-abiding citizens have been disarmed and placed at the mercy of drug gangs and criminals?

Where billions of dollars are stolen and misappropriated by the politically-connected special interests and the progressive public employee unions that foster the type of political corruption that refuses to hold government evil-doers to account for their criminal actions.

Hillary Clinton is a progressive socialist democrat who believes that you don’t pay your fair share of taxes, even when it can be demonstrated that increased government spending does not improve the lives of ordinary citizens as it is siphoned off by the politicians and politically-connected special interests.

“As a result of questions about the status of certain property donated to the White House during the Clinton administration, the National Park Service will accept the return of the property in question and act as a custodian of such property,” according to a statement released by the Park Service, which administers the White House as a unit of the national park system.

After they were criticized for taking $190,000 worth of china, flatware, rugs, televisions, sofas and other gifts with them when they left, the Clintons announced last week that they would pay for $86,000 worth of gifts, or nearly half the amount.

Their latest decision to send back $28,000 in gifts brings to $114,000 the value of items the Clintons have either decided to pay for or return. <Source: ABC News>

There is no doubt in my mind that Hillary Clinton has an exaggerated sense of entitlement and a feeling that the laws that govern us all simply do not apply to the Clintons or their various enterprises. Like all things Clinton, they are willing to erase the issue after the fact by appearing bewildered that such a mistake can be made.  And, after a suitable period of time passes, they simply shrug off evidence or implications of wrong doing as being “old news.”

So what does it really mean when a multi-millionaire Hillary Clinton puts on her black preacher voice and talks about income inequality, lack of educational responsibility, and social justice?

It means that Hillary Clinton is a corrupt liar willing to say or do anything to gain or maintain power. Including lying, cheating, and yes, stealing. What other Presidential family actually looted the White House?

It means “trust me” one more time while I continue to abuse and warp the political system to feather my nest. Asking, “what difference does it make?” if America is weakened and made more vulnerable to her enemies.

What does it say about the progressive socialist democrats that they would stand before God and the American people and offer a corrupt, lying shrew as a legitimate consideration for the United States of America?

What does it say about the GOP when they refuse to stand up and point out that the Emperor has no new clothes?

And, what does it say about the progressive mainstream media that continues to obfuscate, cover-up, and diffuse the incompetence, malfeasance, and criminality of the progressive socialist democrats.

There is but one conclusion. That if America continues down the progressive’s primrose path of lies and corruption, the freedom-loving America that was founded by our wise forefathers may be no more. We may all live in a place of true equality; where misery and misfortune will be shared by all.

Wake up people. The day of reckoning in 2016 is fast approaching and we are being led astray by those who purport to be transparent and accountable; when anyone with a modicum of intelligence and commonsense can see we are being played for the apathetic fools the majority of us appear to have been in the last election.