EQUITY: THE LATEST NAME FOR COMMUNISM 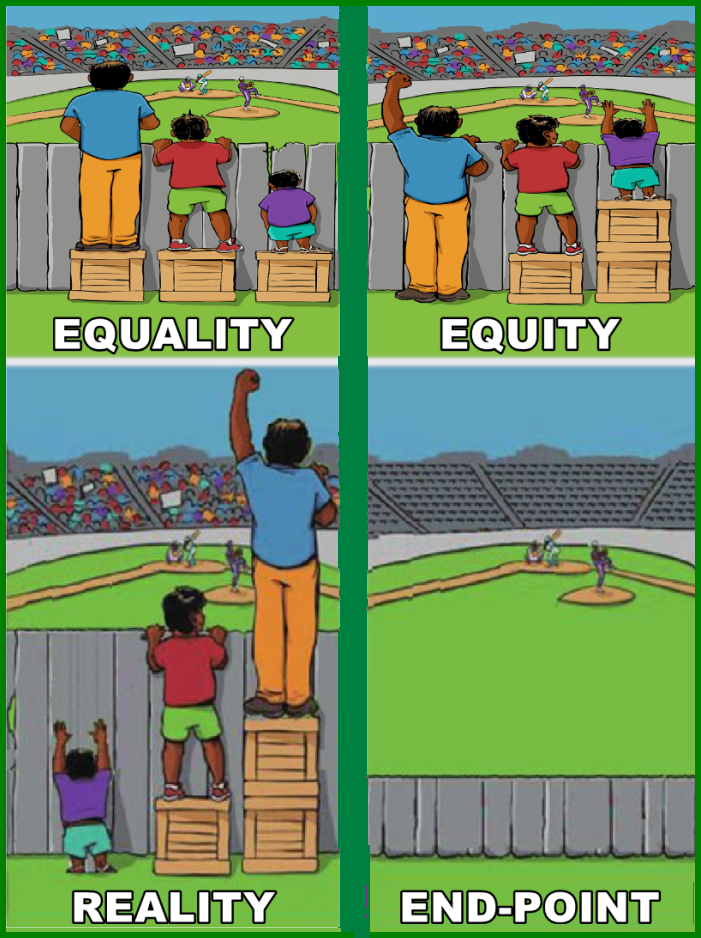 Once again, the politicians are trying to sell Americans a blivit, ten pounds of shit crammed into a five-pound bag…

There is no doubt in my mind that the progressive communist democrats are altering the meanings of words to advance their malignant agenda. Confusing and conflating good and evil, right and wrong, left and right, and up and down. And using projection to attribute their bad actions to the opposition.

The progressive communist democrats are conflating equality, the bedrock principle of our representative democracy where citizens are treated equally under the law, have equal access to opportunities, and have an equal voice over governmental decisions, with equity, where the government recognizes that each citizen has different circumstances and allocates the exact resources and opportunities needed for all citizens to reach equal outcomes.

Equity is a bad word…

Politically speaking, equity is being sold to America as a principle of fairness and justice that focuses on providing what is needed for each person to have an equal outcome. It allegedly recognizes that different individuals and groups have different needs and experiences and that treating everyone the same may not lead to fairness or equality.

Equity-based policies aim to address the root causes of inequality and provide targeted support and resources to marginalized groups to achieve greater equality of outcome.

Equity-based policies make a mockery of our Constitution, American values, and the concept of equality under the law, which means treating everyone the same under the law, and posits that everyone may have access to opportunities to better their lives – rather than guaranteed outcomes.

The progressive communist democrats are using equity to grab political power as they address social and economic inequality. They pander to minorities and promise entitlements to classes of victims they have created to gain or maintain self-serving political power and the right to plunder the public purse.

Equity is little more than a political power grab, based on a false promise of fairness and justice purporting to address social and economic inequality, that creates tyranny, discord, and dissention among American citizens.

Progressive communist democrats and their useful idiots have different views on what is considered fair, arguing that fairness is collective and based on need and ensuring everyone has an equal opportunity to succeed. In contrast, constitutional conservatives have a traditional view that fairness is based on merit and rewarding hard work. Simply put, the non- or underachievers want what the achievers have without putting forth the corresponding effort—looking for assets to be divided on an artificial basis determined by a power-seeking political party.

While it may be true that ordinary individuals do extraordinary things from time to time, most of society’s achievements can be attributed to high-functioning individuals with knowledge, experience, and motivation. There is no societal or national advantage in dragging top performers down to an “equal” level of mediocrity to reduce inequalities.

We are seeing a war on merit and motivation – pandering to under-achieving classes rather than solving our environmental and social issues by investing in the best and brightest. And no, I do not simply mean academics with advanced degrees, as many of these individuals appear to lack common sense and spew jargon-laced nonsense to hide their lack of significant achievement in their own field of endeavor.

The amount of time, effort, and money required to bring individuals up to minimum performance standards at the expense of propelling high-achievers forward is a threat to our national security and society in general as it produces little more than conformance and mediocrity.

To allow our elected representatives to pander to any segment of the population by reallocating funding away from achievers and relaxing performance standards is to further weaken our nation at a time when we are facing motivated enemies who are concentrating their efforts on turning out individuals capable of superior achievement.

We are screwing ourselves as our elected officials feather their own nests.