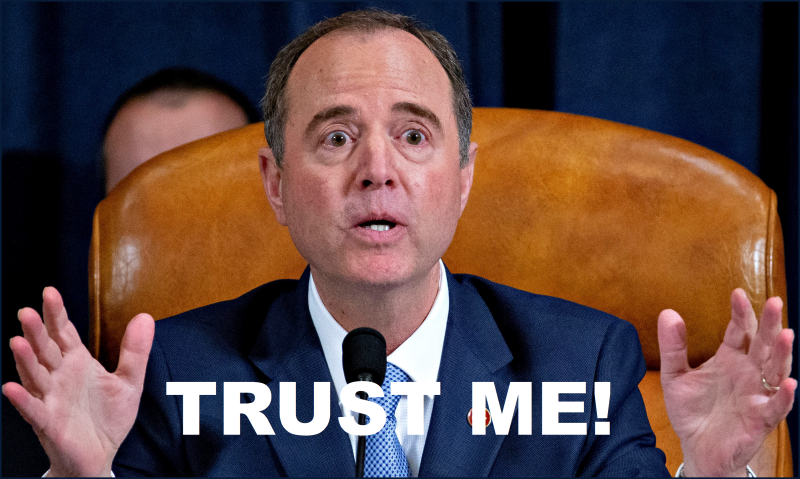 Now that Adam Schiff is no longer the Chairman of the House Intelligence Committee, where he can no longer point to never-to-be-released “classified” documents as proof that his outrageous claims are valid, he needs a new diversionary schtick…

Pointing to another lying politician!

Funny when the actual previously-classified information was released, Schiff’s lies about the Nunes memo were proven ludicrously false.

The new inspector general report on FISA abuse settles the debate between Republicans and Democrats on the House Permanent Select Committee on Intelligence. Both groups put out memos about the Department of Justice’s efforts to secure a warrant to wiretap Carter Page.

At the time of their release, the media praised Democrat Adam Schiff and his memo and vilified Republican Devin Nunes and his memo. Nearly two years later, the inspector general’s report vindicates the Nunes memo while showing that the Schiff memo was riddled with lies and false statements. <Source>

And then there is the schtick about condemning the opposition… 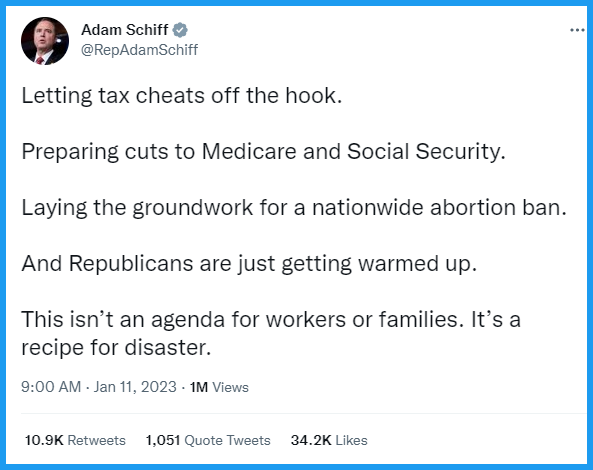 Of course, Schiff overlooks the truth.

(1)  The tax code was written by lobbyist-driven legislators, especially Democrats, who knowingly voted for tax loopholes and have refused to close them for years.

(2)  Ignoring the government’s own reports of Social Security’s projected insolvency and the unsustainability of Medicare.

Social Security is projected to be insolvent a year earlier than previously forecast.

Annual government reports on the solvency of the programs underscored the questions about the long-term viability of Social Security and Medicare.

The financial outlook for Social Security is eroding more quickly than previously expected, as the coronavirus pandemic has drained government revenues and put additional strain on one of the nation’s most important social safety net programs. The overall finances for Medicare, however, are expected to hold steady, though the health program is still forecast to face financial pressure in the coming years.

Annual government reports released on Tuesday on the solvency of the programs underscored the questions about their long-term viability at a time when a wave of baby boomers are retiring and the economy faces ongoing uncertainty as variants of the coronavirus surge. The United States economy already faces soaring federal debt levels in the coming decades, but both Democrats and Republicans have been wary of making significant structural reforms to the popular programs. <Source>

(3)  Democrats have had years to codify abortion law and prefer to ignore the issue except as a campaign talking point and fundraising ploy. Of course, they ignore that any such law would be as unconstitutional as the original law itself.

(4)  Democrats live in an “opposite” world of projection. Not only are they the party of slavery, secession, and segregation, they have long abandoned working-class Americans in favor of oligarchs and despots. Democrats have destroyed jobs, raised taxes, and decimated the working middle class with their crazy restrictions based on a communist ideology.

(5) What was the Intelligence Committee doing under your direction for years while you pursued the Trump bogeyman? What about the known terrorists crossing an unprotected border? About those Chinese spies in the government and defense industry. Perhaps you could ask your fellow intelligence committee member Swalwell, who was caught sleeping with a Chinese spy?

Adam Schiff must be censured and expelled from the House of Representatives if not prosecuted criminally for 18 U.S.C. § 371—CONSPIRACY TO DEFRAUD THE UNITED STATES.

If two or more persons conspire either to commit any offense against the United States, or to defraud the United States, or any agency thereof in any manner or for any purpose, and one or more of such persons do any act to effect the object of the conspiracy, each shall be fined under this title or imprisoned not more than five years, or both.

If, however, the offense, the commission of which is the object of the conspiracy, is a misdemeanor only, the punishment for such conspiracy shall not exceed the maximum punishment provided for such misdemeanor. <Source>

Let’s see if the newly-elected Committees have the cojones to take on Schiff.