These twelve Republicans voted to pass the radical Democrat "Respect for Marriage Act (H.R. 8404) which usurps states' rights to provide statutory authority for same-sex and interracial marriages while repealing provisions that define marriage as between a man and a woman. Overlooking the fact that defining other martial options as civil unions left the age-old sanctity of the word marriage. 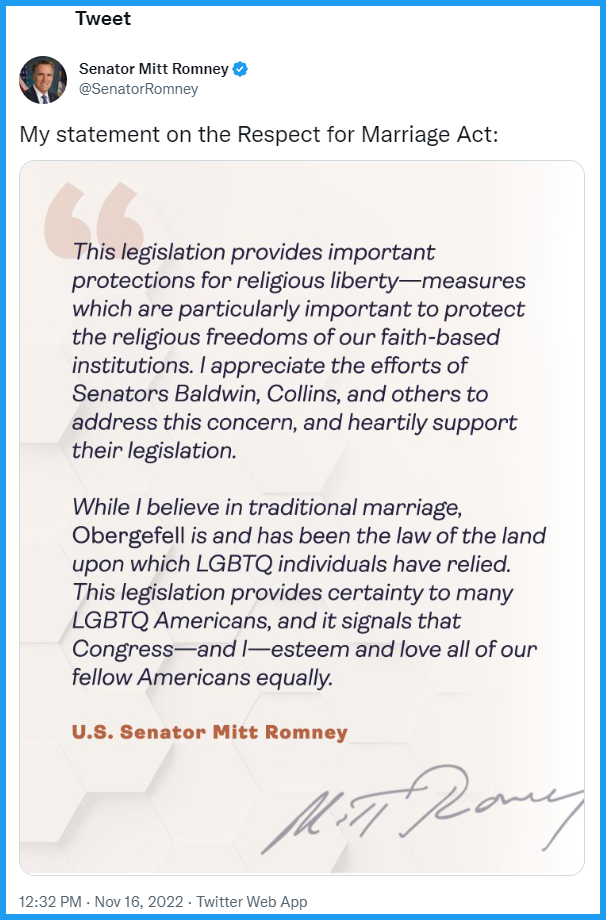 Is this pandering to a wealthy, politically-connected voting block,  virtue signaling, of a reaffirmation of the same-sex status quo? Or, is it the beginning of an attack on religious rights -- creating a hostile atmosphere for those institutions and individuals who believe that marriage is the traditional union of a man and woman?

How many bakers will have to forfeit their religious rights to legally recognize something they do not believe or support -- under penalty of law? What happened to the U.S. Constitution that demands equal treatment "under the law," no more, no less?

Are we looking at communism with its stated aim of marginalizing and oppressing people of faith? Persecuting those who believe in marriage as society has defined it for ages?

Against the progressive communist democrat destruction of the American nuclear family, there is Senate Majority Leader Chuck Schumer claiming we have to grant citizenship to tens of millions of foreign individuals who have healthy birth rates to continue societal growth. Many of these individuals are unfamiliar with American values and the duties of citizenship while maintaining allegiance to their former oppressive nation or culture.

While there are legislative and procedural advantages to having a Senate majority, unless the GOP can muster an overwhelming majority in 2024, many Senators will continue to jump the aisle with impunity to further the progressive communist democrat agenda.