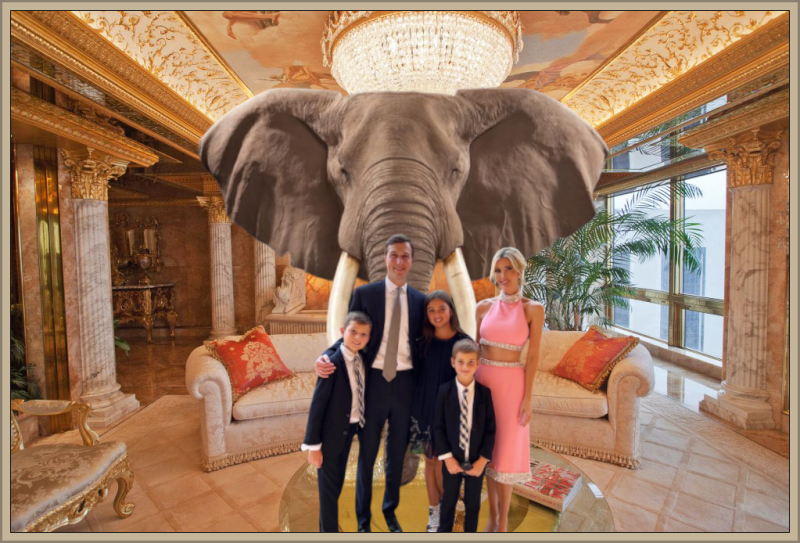 While President Donald J. Trump may have earned our boundless appreciation for his numerous record-setting accomplishments while in office and fighting against almost unthinkable obstacles, that does not mean he should receive uncritical support for another term as President of the United States. Or Americans need to tolerate his ego-driven, boorish, transactional, and self-dealing nature in the future? Or that he ran the Office of the Presidency much like he ran the Trump Organization — in a haphazard, chaotic, and opaque manner.

While candidate and then President Trump railed against the corruption of the Biden Crime family, including Vice President Biden’s well-documented and self-confessed quid pro quo deal in Ukraine to save his son Hunter from investigation and claims that the suppression of the material on Hunter Biden’s laptop cost him the 2020 election, there is no doubt in my mind that Trump has a similar family issue.

In particular, with the back-room political machinations and self-dealing of his son-in-law, real estate operator Jared Kushner.

As an uptown New York liberal who favored Democrats, Jared Kushner was a curse to constitutional conservatives. It was Kushner who fought against the Border Wall. Kushner who led the fight to oust Steve Bannon, a politically savvy strategist. Kushner who supported the generals, John Kelly, James Mattis, and H.R. McMaster, who worked secretly to subvert Trump’s policies because they believed they had a better grasp of the situation and the prescriptive solution. Kushner who shoved Vice President Pence aside to run the response to the Covid pandemic and deferred to Drs. Fauci and Birx. Kushner was the one that led the effort to oust Dr. Scott Atlas when he attempted to inject natural science into the Covid debate as an advisor on the White House Coronavirus Task Force.

Putting politics aside, there are open questions about Kushner using the power of the Trump presidency much in the same way that Hunter Biden allegedly sold Joe Biden’s office.

Democrats in Congress have launched an investigation into whether the bailout financing for Kushner Companies’ 666 Fifth Avenue impacted United States foreign policy.

The probe seeks to determine whether a payment in excess of $1 billion for the Kushner family’s skyscraper was connected to the lifting of a Saudi blockade of Qatar. Sen. Ron Wyden of Oregon and Rep. Joaquin Castro of Texas requested a bevy of documents from Brookfield Asset Management, which bailed out the troubled office building in 2018, as well as pertinent ethics records from a senior White House lawyer.

“This sequence of events, especially the stunning reversal in U.S. policy towards Qatar, raises serious questions about what role Jared Kushner — and the financial interests of his family — may have played in influencing U.S. foreign policy regarding the blockade,” the lawmakers wrote.

At Jared Kushner’s behest, the firm purchased 666 Fifth Avenue in 2007 for a record-breaking $1.8 billion. It initially sought to reposition the asset, but plans to replace it with a new skyscraper that would have condos, a hotel and retail never materialized.

A decade later, the building was still 30 percent vacant, and a $1.4 billion payment on the debt was due. Qatar’s sovereign wealth fund initially rebuffed Charlie Kushner’s request to invest about a billion dollars in the property, which the lawmakers say coincided with a dramatic shift in foreign policy toward Qatar.

During a 2017 trip to the Middle East, Jared Kushner met with representatives of the United Arab Emirates and Saudi Arabia to discuss a blockade of Qatar. Despite questions and concerns raised by the State Department — including from Rex Tillerson, then the Secretary of State — the controversial move was backed two weeks later by President Donald Trump, the investigation states.

More than a year later, Kushner received a $1.28 billion bailout from Brookfield, which purchased the ground lease beneath the tower and paid nearly a century of rent up front, just months before the original note came due.

Subsequently, the restrictions on Qatar were eased. A Financial Times investigation found that Qatar’s sovereign wealth fund was the second-largest stakeholder in Brookfield Property Partners, the entity that provided Kushner with the financing. <Source>

Chairwoman Carolyn Maloney, D-N.Y., wrote in a letter to Kushner that her committee is looking into the investment by the sovereign wealth fund of Saudi Arabia, which is controlled by Crown Prince Mohammed bin Salman, into Kushner’s firm Affinity.

The probe will focus on whether Kushner’s personal financial interests improperly impacted U.S. foreign policy while he served in the White House under his father-in-law, former President Donald Trump, Maloney wrote in the letter.

She noted that Kushner created his investment firm the day after Trump left the White House in January 2021 and the Saudi government gave it the $2 billion six months later.

“The Committee is concerned by your decision to solicit billions of dollars from the Saudi government immediately following your significant involvement in shaping U.S.-Saudi relations,” Maloney said, adding that Kushner’s close relationship with the crown prince as well as his pro-Saudi positions during the Trump administration and the Saudi government’s funding “create the appearance of a quid pro quo for your foreign policy work during the Trump Administration.” <Source>

While nobody is accusing Jared Kushner of wrongdoing, that does not mean that his backstory cannot be used as another distraction technique by the progressive communist democrats to attack another Trump candidacy rather than be held responsible for their weakening of America and the destruction of our economy.

During the closing days of the 2022 mid-terms, Trump continually disparaged GOP candidates or made it all about his upcoming presidential run. On the financial side, Trump refused to share his $100 million war chest with fellow candidates. Like his business dealings, he thought his overvalued name and attention were enough of a contribution.

Why would we select a candidate with a 33% fan base and ignore the 66% who either hate Trump or regard him as a clownish non-entity?

Why would we listen to the Bushies, the Romneys, and the Roves to return to Country Club Republicanism, where politicians engage in wining, dining, and pocket-lining?

Why would we select a mercurial candidate whose reckless regard for anything not benefitting Trump is a pattern and practice that cannot be tolerated in a fight to restore our core values?

It’s about our country, not Trump or his obsession with the stolen 2022 election that can never be constitutionally or legally remedied. We can only move forward while holding those in both parties responsible for their criminal wrongdoing.

There is no doubt in my mind that I will support the GOP candidate over any Democrat, but I believe it is our civic duty as Americans to select the best and most viable candidate.