Honoring our troops on Veterans Day …

Let us remember that it was our senile Commander-in-Chief and the corrupt politicized military leadership that gave us a resounding defeat in Afghanistan that even surpasses our defeat in Viet Nam. What our soldiers won in battle, our politicians negotiated away. It is a bitch when an illegal alien receives more consideration and military benefits that do our soldiers. 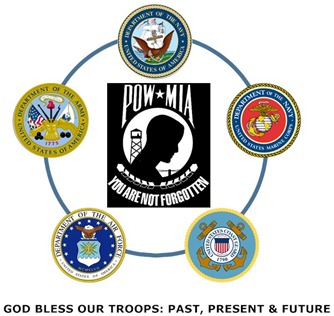 And an accounting which is not complete …

For some as yet unexplained reason, John McCain approved legislation that has kept Americans from getting a complete accounting of our MIAs from Viet Nam.

The legislation ensured that “… the Defense Department is not obligated to tell the public about prisoners believed alive in captivity and what efforts are being made to rescue them. It only has to notify the White House and the intelligence committees in the Senate and House. The committees are forbidden under law from releasing such information.” For those who wish to read an interesting article on McCain’s efforts to prevent a full and complete accounting of MIAs, it can be found at “ The War Secrets Sen. John McCain Hides: Former POW Fights Public Access To POW/MIA Files.”

Our nation and each citizen owe an unpayable debt to those who risk life and limb to protect our right to prosper or protest in complete freedom from a totalitarian government.

And, no matter what the spin, you are not a private citizen exercising your “free speech rights” when you give aid and comfort to America’s enemies by making propaganda announcements --  you are a traitor.

Most of all, tell those in the far-left who are openly anti-military and anti-America where to step off. <insert strong language message here>