2022 MID-TERM ELECTION: THE DAY AFTER

It should surprise nobody that I am an unhappy camper.

Last night proved the pundits and pollsters wrong, there was no “red wave,” and there are races still undecided, so there is a lack of certainty about the House and Senate majorities.

It appears Biden will stay the course and be stage-managed by the progressive communist democrat Obama acolytes.

Speaking to reporters the day after the midterm elections, Biden was asked what he might do differently to address voters’ concerns about the economy and the widespread sentiment that the country is generally moving in the wrong direction.

“I’m not going to change anything in any fundamental way,” he added. <Source>

However, all is not lost, as it is likely that we will have a slim majority in the House.

The question then becomes, is the feckless Kevin McCarthy (R-CA) strong enough to hold the House GOP members together and heavily punish those that jump the aisle on critical votes? Will he be able to resist the inevitable media pressure when threats of “government shutdowns” loom when spending cuts are proposed? Will he have the strength to use the Democrat’s dirty tactics to re-jigger committee assignments and investigations? Does McCarthy have the power to stand up against Republican Whip Steve Scalise (R-LA)?

House Minority Whip Steve Scalise (R-La.) announced a bid to become the next House majority leader on Wednesday as the GOP appears likely to win a narrow majority in the lower chamber.

“The American people deserve a House of Representatives that can move the agenda that was promised to them on the campaign trail,” Scalise said in a letter addressed to his GOP colleagues in the House.

“As your Majority Leader, I will work relentlessly to usher our vision through the House and show the country how conservative ideas can solve the problems that families are facing,” he added.

He said he has a proven track record of bringing together a wide range of viewpoints in the GOP to build consensus and pointed to conservative legislative successes like the Tax Cuts and Jobs Act of 2017 and the U.S.-Mexico-Canada Agreement, an updated version of NAFTA signed into law in 2020.

Scalise also mentioned successfully keeping the Republican caucus completely unified in opposition to President Biden’s American Rescue Plan and Inflation Reduction Act. His current job as whip is to rally votes in favor or against legislation among Republican members of the House. <Source>

Why bother? It is what it is; the only things that matter are election integrity, accurate counts, and the support and funding for those in runoff races.

You can endlessly debate candidate quality, the influence of Trump and his penurious spending, the role of the polls and pundits, the lack of leadership at the RNC, and the spending of Mitch McConnell to support loyalists – and it isn’t significant unless there are lessons to be learned that will inform the 2024 presidential election.

One must acknowledge that one major election factor is GEN-Z voters under 30 (born 1997 to 2012), who may have blunted the “red wave.”

A suggestive pattern from a CNN national house exit poll from a media outlet with a characteristic left bias.

This is the internet generation that is overly susceptible to conflating what they see on social media with the broader aspects of reality and the vagaries of life. While some may label it a “conspiracy theory,” it is possible that the tech giants, who are demonstrably left-leaning, may have served-up targeted ads and data feeds that ranked progressive issues and viewpoints over suppressed conservative views.

One disgusting note: Trump throws Melania under the bus...

Trump 'furious with Melania for telling him to endorse Dr. Oz' and is 'screaming at everybody' this morning after lackluster midterm results...while Republicans blame him for defeats and turn to DeSantis for 2024

For Trump, the midterms were supposed to be an amuse-bouche before another White House campaign.

But some of his most prolific candidates crashed and burned overnight. Oz, a TV star turned politician, suffered one of the most embarrassing defeats of the night, losing to John Fetterman in Pennsylvania.

According to The New York Times' Maggie Haberman, who recently released a scathing biography about Trump, the former president is particularly 'furious' that Oz lost - and is 'blaming everyone... including his wife' for advising him to support him in April.

'Trump is indeed furious this morning, particularly about Mehmet Oz, and is blaming everyone who advised him to back Oz -- including his wife, describing it as not her best decision, according to people close to him,' she tweeted. <Source>

It remains to be seen if Trump has the discipline to delay his “yuge announcement” scheduled for November 15 until after the Georgia runoff. Lest we forget, it was Trump’s fault that the GOP lost two Senate seats in Georgia, costing the GOP the Senate majority.

It appears that party perceptions have flipped. The Republicans now represent the working man and an increasing number of people of color, while the Democrats have become the party of tech oligarchs and corporatized America. Unless the GOP improves its outreach to younger individuals, the party will age itself out of power.

As they say, stay tuned for the results after the commercial. And, if there is a bright spot: the Democrats will own the pain yet to come.

If you are interested in donating money, do not give it to Trump or a joint Candidate-Trump campaign, as the candidate will see virtually no funds from a Trump-associated effort.

That we cannot process votes quickly speaks to an inefficient organization, a lack of personnel, and machine capacity. Or, the Democrats impeding the count while they “find” votes in close races.

Beyond a serious candidate, Americans want, first, stability; second, a vision for a prosperous future; and third, to reduce past wrongs. Attacking the media and hating progressive communist democrats is not enough. 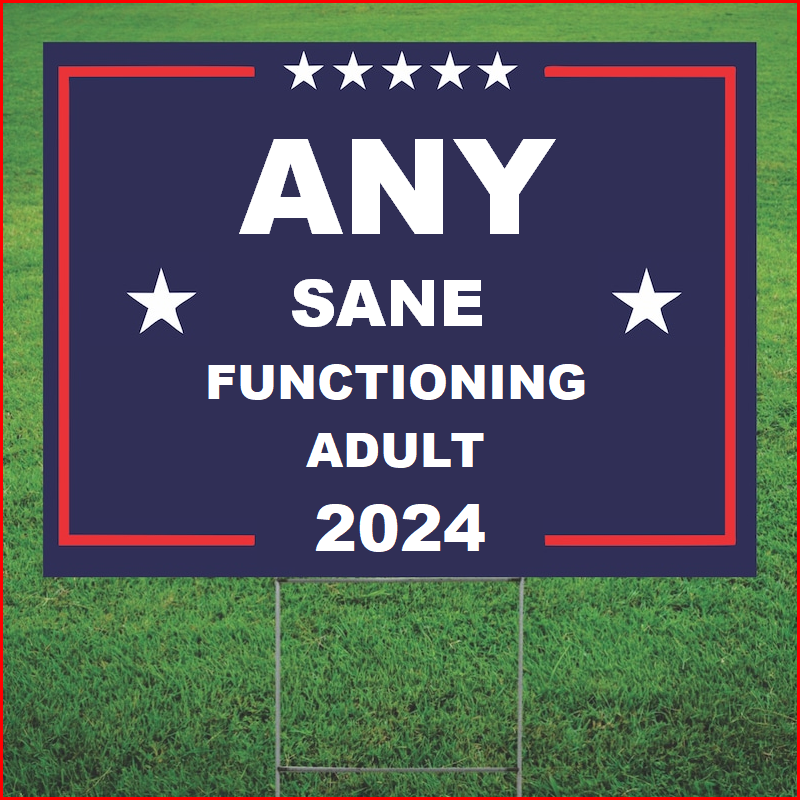