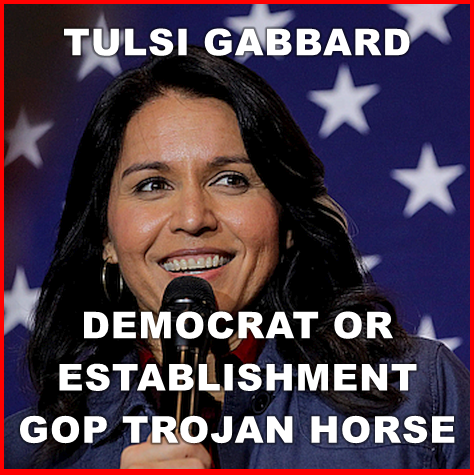 I wonder if former Representative Tulsi Gabbard, often confused for Nikki Hailey, is a wolf in sheep’s clothes?

In 2015 she was named as one of the World Economic Forum’s ‘Young Global Leaders’, joining the other young liberals including Emmanuel Macron, Jacinda Ardern and Justin Trudeau, all of whom graduated from Klaus Schwab’s class to become modern-day left-wing authoritarians. She openly acknowledged the “honor” in a Tweet. “ @wef  I'm honored to be selected as 2015 @YGLvoices - representing #Hawaii amongst leaders from around the world.”

Considering her appearances on Fox News and other self-described conservative outlets, she appears to be playing the part of a conservative Republican. Acting, stagecraft, and costuming?

Because she criticizes the Democrats does not mean anything.

Former congresswoman Tulsi Gabbard's decision to leave the Democratic Party has some wondering whether she could be former President Donald Trump's future running mate.

Gabbard announced on Tuesday in a video shared to social media that she was no longer a Democrat, and said the party was being led by "an elitist cabal of warmongers driven by cowardly wokeness" who promote "anti-white racism." She went on to say that she was leaving the party to become an Independent in part because she believed Democrats were bringing the world "ever closer to nuclear war."

Many were not surprised by Gabbard's move away from the Democratic Party. The former congresswoman has repeatedly promoted anti-LGBT positions, taken a pro-Russia stance on the war in Ukraine that is more in line with the American far-right than the left and advocated against "woke" culture since the end of her failed 2020 presidential campaign as a Democrat. <Source>

[Let us not forget that Trump was a registered Democrat from August 2001 through September 2009 and is known to be transactional, doing what seems best for Trump in the moment regardless of the dodgy character of those with whom he deals.

In a perfect Democrat scenario, Gabbard becomes the Vice President and the rapidly aging Trump is removed from office, either by the 25th Amendment for incapacitation or impeachment.

Trump is known to forgive easily if the person is useful and deferential. (“Gabbard voted ‘present’ when the House of Representatives voted to impeach President Trump in December 2019, saying, ‘I could not in good conscience vote against impeachment because I believe President Trump is guilty of wrongdoing. I could not in good conscience vote for impeachment because removal of a sitting president must not be the culmination of a partisan process, fueled by tribal animosities that have so gravely divided our country.”]

Tulsi Gabbard to campaign for GOP after leaving Democratic Party

Former Rep. Tulsi Gabbard and 2020 presidential candidate has revealed she will hit the campaign trail for several GOP candidates, one day after announcing she was leaving the Democratic Party.

On Tuesday, Gabbard announced in a video posted to social media that she was leaving the Democratic Party and urged "fellow common sense independent-minded Democrats" to do the same.

"I can no longer remain in today's Democratic Party. It's now under the complete control of an elitist cabal of warmongers driven by cowardly wokeness, who divide us by racializing every issue and stoking anti-white racism," Gabbard said on the first episode of her new podcast, "The Tulsi Gabbard Show." <Source>

[OCS: Just announcing that you are leaving the Democratic Party” means nothing in terms of character and fundamental ideology. We have seen a number of high profile individuals cross party lines to gain an electoral advantage. Remember former Democrats Rick Perry, Herman Cain, Michelle Bachman, Michael Bloomberg, Condoleezza Rice, and numerous others? It’s mostly about political advantage and jumping the Democrat “waiting for their turn” line.]

Tulsi Gabbard is not a constitutional conservative or even close to being an acceptable GOP candidate.

While she is telegenic, well-spoken, intersectional (woman, non-White), politically experienced, a veteran of the military, and appears to be a polite, GOP-accepting individual, she is also …

We are screwed when the GOP mistakes polite tolerance of the GOP "opposition” as an indication of core conservative beliefs.

It would be even worse if she runs as an independent to split the Republican vote to give the Democrats the win.

Beware of the Democrat Trojan Horse.