I am bombarded by campaign literature promising to alleviate California’s homelessness problem.

Unsurprisingly, homelessness has become a hot button issue in the heated Los Angeles mayoral election, which takes place on Nov. 8.

Angelenos are eager, if not desperate, for their next mayor to reduce the more than 41,000 people living in tents, RVs and shelters in the city. But the proposals from each candidate to address homelessness vary widely and were, until a recent L.A. Times analysis, sparse on the details.

U.S. Rep. Karen Bass plans to combine interim and permanent housing options by expanding and accelerating already-existing programs, like housing vouchers and Project Homekey. Her plan, which would theoretically bring more than 17,000 people indoors, has a price tag of $292 million.

[OCS: Karen Bass is a Castro-loving communist who represents a clear and present danger to Los Angeles.]

Members of the city council’s Homelessness and Poverty Committee appeared divided over whether the city should begin providing services more directly, or continue working with the regionally focused Los Angeles Homeless Services Authority (LAHSA), which gets funds from the federal government.

[OCS: It’s a fight over who controls hundreds of millions of dollars.]

The authority was formed in 1993 at a time when the region faced a homeless crisis and several municipalities and jurisdictions fought over federal funding and had differing views on how to provide homeless services.

Los Angeles City Councilman Bob Blumenfield, who represents District 3 in west San Fernando Valley, said the city should to bow out of the regional system led by LAHSA, and provide its own city-based homeless services.

LAHSA is the lead regional organization that helps the homeless find housing and services, and oversees the annual countywide homeless count. But Blumenfield argued that Los Angeles has recently worked to “build on our city’s homeless response system.”

“At this point, we were already doing the work and we should look at what it takes to bring homeless services in house,” Blumenfield said. “Many of us are building our own pilot programs.” Criticizing LAHSA, he said, “Our regional homeless system is too big in my opinion, and it’s unresponsive to our local needs.” <Source>

Unfortunately, this is little more than a hustle perpetrated by politically-connected grifters.

The facts are simple.

(1)  The stories about middle-class individuals, families, and children falling into homelessness and living rough on the streets are mostly the exploitation of an insignificant number of individuals. Most of these individuals have some support mechanism, and the duration of their homelessness is relatively brief. The media appears willing to exploit these stories to drive a political narrative for additional funding for homeless programs.

(2)  The great majority of the homeless are drug addicts or mentally ill.

(3)  Most homeless initiatives are bound to fail because, in order to resolve their homeless issue, they must want help in the form of a permanent solution. With drug addicts being confined in any sponsored program denies them easy access to a criminal means to earn money and their drug dealers. Not that they are unwilling to accept temporary assistance in the form of shelter during inclement weather, a hot shower, a fulfilling meal, or clothes.

(4)  The greatest beneficiaries of homelessness solutions are the government, foundation, and non-profit agencies whose livelihood demands a homeless population to serve—likewise, the politically-connected real estate developers and operators who have turned homelessness into a multi-million dollar enterprise.

This is a visual advertisement for the grifters… 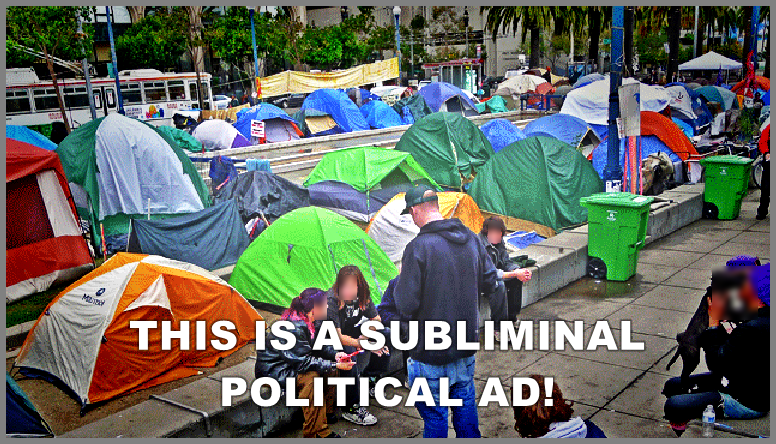 The politicians are seeding homelessness for their own interests.

When it comes to the homeless, there are no comprehensive solutions, only marginal ones based on an individual case-by-case basis involving both judicial and health authorities. Individuals who do not want help and resist assistance will always bollix up the system.

We are so screwed when politically-connected special interests play disadvantaged individuals.