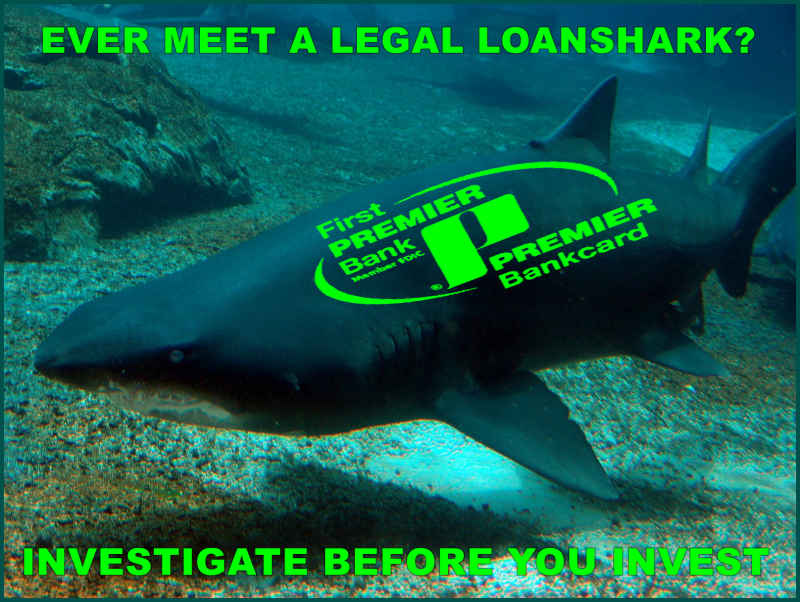 Thinking the issue was resolved, I was surprised to receive a First Premier Bank “Platinum” Mastercard in the mail.

I again called the bank and spoke with their representative, who assured me they could see the first fraud alert and advised me to destroy the card.

But that’s not what pissed me off…

It appears to be a scam. On the mailing carrier form with the attached credit card is a greeting. “CONGRATULATIONS! You have been approved for a First Premier Bank Credit Card.”

I found that I had a ridiculously low $700 credit limit, with available credit of $613.00 as soon as I paid a $55 “Program Fee.”  Somewhat confusing as the First Payment is stated as $30.00. Additionally, “If you pay your initial Program Fee by check, we will hold the payment for up to six days. This means your Credit Account won’t be opened and available to use for transactions for up to 30 days.

Sketchy as hell until I read the accompanying program disclosure form.

It appears that usury (exorbitant or illegally high rates) laws are state-specific, and some states do not have any limitations on interest rates as long as they were set by written agreement. Many states cap credit card interest

According to the Federal Reserve’s G-19 Consumer Credit Report, in May 2022, the average credit card interest rate in the United States on accounts with balances assessed interest was 16.65%.

With my credit report in their computer and a Super-prime+ FICO score, the bank decision algorithm is either screwing me without first kissing me, or this is what they do to everybody who legitimately applies for one of their cards.

Cash Advance fees are 5% of the transaction or $8.00, whichever is greater. Late Payment and Return Item Charges are both up to $39.00.

The bank is controlled by billionaire T. Denny Sanford, the wealthiest man in South Dakota.

Thank your legislators for pretending to support the poor with credit products they cannot afford while enabling financial institutions to bleed them dry.

The lesson here is that bad credit can be turned into big profits.