WHY IS THE DOJ AND FBI RESISTING THE APPOINTMENT OF A SPECIAL MASTER?

There is absolutely no doubt that the search warrant used to raid former President Trump’s residence was overly broad and lacked the specificity and particularity to keep the warrant from being an unconstitutional general warrant.

Likewise, both the Department of Justice and the FBI have admitted that they inappropriately collected of a personal or privileged nature. So why are they resisting the appointment of a special master to verify that the documents seized were classified and related to the charges specified in the warrant?

5. Although the government will provide the Court more detail in its forthcoming supplemental filing, the government notes that, before the Court issued its Preliminary Order, and in accordance with the judicially authorized search warrant's provisions, the Privilege Review Team (as described in paragraphs 81-84 of the search warrant affidavit) identified a limited set of materials that potentially contain attorney-client privileged information, completed its review of those materials, and is in the process of following the procedures set forth in paragraph 84 of the search warrant affidavit to address potential privilege disputes, if any. <Source>

However, suppose the FBI is found to have taken unclassified documents relating to the internal affairs of the FBI and DOJ along with attorney-client privileged documents relating to Trump’s RICO lawsuit against the FBI, DOJ, and others. In that case, the special master should return those documents and seek a grand jury indictment for all involved parties charging criminal obstruction of justice, fraud upon the United States for the costs involved, and theft under the color of authority. The prosecutor shall be denied the use of all documents and their derivatives as the fruit of the poisonous tree.

The FBI motto should be changed, its top leadership dismissed, and its employees administratively assigned to an interim bureau while the FBI is reformed. 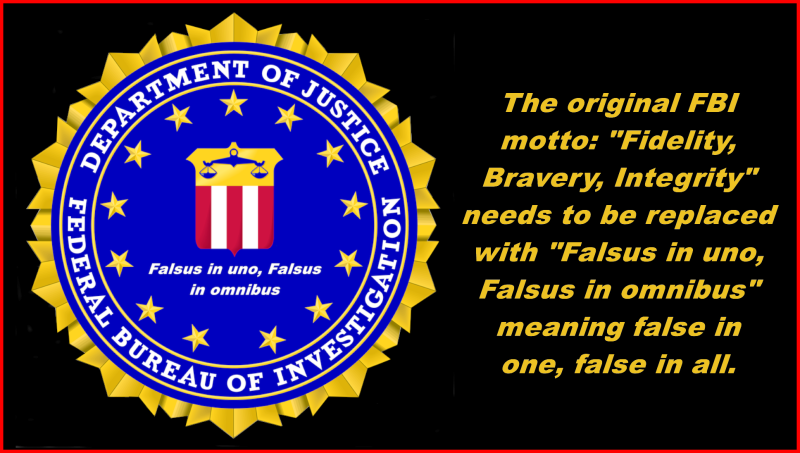 Why is everybody shocked to see political intervention by the FBI?

Think back to the days of Watergate when the cover-up of minor-league political surveillance of the Democrats erupted in a scandal that saw a sitting President resign from office. Remember the notorious leaker "Deep Throat" who spoon-fed investigative details to Washinton Post reporter Bob Woodward, who shared it with Carl Bernstein.

Thirty-one years after the fact, the leaker turned out to be former Federal Bureau of Investigation Associate Director Mark Felt, the number two man in the Bureau. And not so coincidently, it was a move against an effective Republican President named Richard Nixon.

The American people can no longer trust their government or its premier intelligence and law enforcement agencies. Likewise, it cannot trust former officials like former FBI Director Robert Mueller and former Attorney General William Barr to help reform the corrupt agencies. I even have growing doubts about former United States Attorney for the District of Connecticut John Durham.

Why are the government and the media keeps smearing Donald Trump while ignoring the millions of foreign bribes Biden raked in through his family? Or the dismissal of Hillary Clinton's stolen classified documents which were surely compromised by foreign hostile powers?