SOMETHING STINKS IN UKRAINE 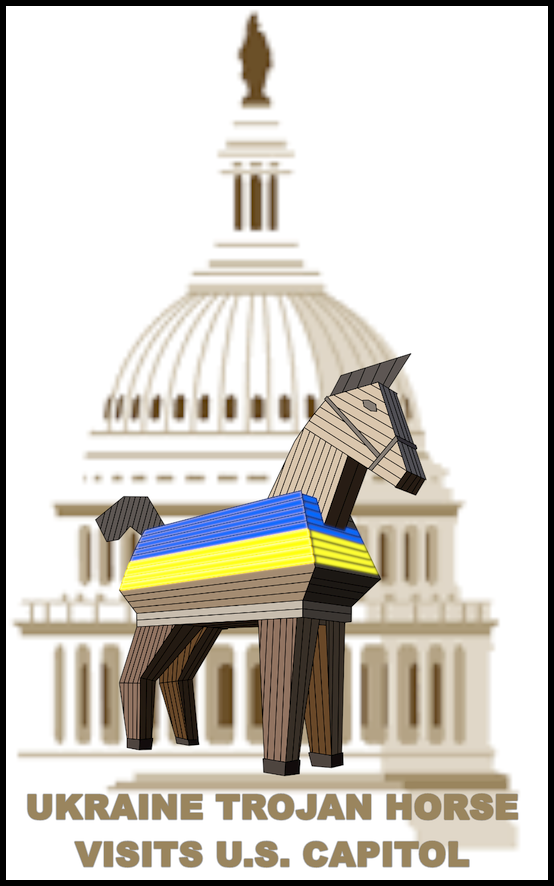 It is truly a crazy world when the establishment’s financial journal of record allows the head of a notoriously corrupt country to make an editorial pitch for a country in an unwinnable war and sucking up billions of free U.S. taxpayer dollars.

Political fiefdoms of the oligarchs

As a result of constitutional changes enacted since 2004, the Ukrainian parliament has substantial new powers to name and dismiss the prime minister and much of the cabinet, with no presidential veto. Thus, whoever becomes prime minister will largely overshadow President Yushchenko on domestic policy questions.

Another crucial benefit of membership in parliament is immunity from criminal prosecution—a distinct threat for most of Ukraine’s business-political elite, including those associated with the Orange Revolution.

The ultimate composition of the ruling coalition is of great importance to Ukraine’s oligarchs, who, like their counterparts across the former Soviet Union, conduct their affairs in the manner of Mafioso and consider the official levers of governmental power little more than mechanisms for self-enrichment and settling old scores. <Source>

The U.S. Department of State and the CIA fomented revolution in Ukraine.

The U.S. Department of State recently congratulated Ukraine on its third revolution anniversary.

"Three years ago, thousands of Ukrainians came together on the Maidan, Kyiv's central square, to demand that their voices be heard," on its website, the U.S. Department of State.
During this revolution, Ukraine citizens were out in harsh temperatures and often vindicated by police and security forces. All of this was done in order to have a peaceful government and to "recognize their choice to join Europe."
The State Department is proud of the progress the Ukraine has accomplished since the revolution, and expects further progress to be made.
"As we remember the courage and resolve shown by the Ukrainian people in the Revolution of Dignity, the United States calls on Ukraine’s leaders to strengthen efforts to fight corruption and continue the political and economic reforms that will honor those who gave their lives to secure a better, more democratic future for Ukraine" the State Department said.
Since 1991, the U.S. has served as strong supporter for the people of Ukraine and its country. Moving forward, the U.S. Department of State reports it will continue to support and be an ally in Ukraine's fight for a strong and peaceful revolution. <Source>

The Ukraine Mess That Nuland Made

As the Ukrainian army squares off against ultra-right and neo-Nazi militias in the west and violence against ethnic Russians continues in the east, the obvious folly of the Obama administration’s Ukraine policy has come into focus even for many who tried to ignore the facts, or what you might call “the mess that Victoria Nuland made.”

Assistant Secretary of State for European Affairs “Toria” Nuland was the “mastermind” behind the Feb. 22, 2014 “regime change” in Ukraine, plotting the overthrow of the democratically elected government of President Viktor Yanukovych while convincing the ever-gullible US mainstream media that the coup wasn’t really a coup but a victory for “democracy.”

Assistant Secretary of State for European Affairs Victoria Nuland, who pushed for the Ukraine coup and helped pick the post-coup leaders.

To sell this latest neocon-driven “regime change” to the American people, the ugliness of the coup-makers had to be systematically airbrushed, particularly the key role of neo-Nazis and other ultra-nationalists from the Right Sektor. For the US-organized propaganda campaign to work, the coup-makers had to wear white hats, not brown shirts. <Source>

Ms. Nuland, a longtime State Department official who served in the George W. Bush administration as the U.S. Ambassador to NATO, served during the Obama administration as assistant secretary of state for European and Eurasian Affairs.

In that capacity, according to the book “Russian Roulette,” she played an instrumental role in the evolution of Christopher Steele’s negative campaign research on then-presidential candidate Donald Trump in 2016 by giving permission for an FBI agent in London to meet with the former U.K. intelligence officer. <Source>

State Department Assistant Secretary Victoria Nuland worked with U.S. Ambassador to Ukraine Geoffrey Pyatt in late 2015 to create a plan to force the firing of Ukrainian Prosecutor General Viktor Shokin, according to [senior State Department official] Kent. Nuland was also among a network of Obama administration officials involved in the distribution and recirculation of the infamous Steele dossier, the document used by the FBI to secure a maximally intrusive spy warrant to surveil a Trump-campaign associate.

“My understanding is that the conversations that were near-daily between Ambassador Pyatt and Toria Nuland regarding what to do on the way forward then included pitching the office of the Vice President to push President Poroshenko to remove Shokin,” Kent told lawmakers on Oct. 15.

Biden ultimately carried out Nuland’s plan during a visit to Ukraine in December 2015 and has since bragged, on at least two occasions, about forcing Shokin’s firing by threatening to cut off the loan guarantees. At the time Biden exerted pressure on Ukraine, Shokin was investigating Burisma, the Ukrainian gas giant that was paying Biden’s son Hunter Biden to serve on its board of directors. The Ukrainian president asked for Shokin’s resignation two months after Biden’s overture. The Ukrainian Parliament approved the resignation on March 29, 2016. <Source>

And what about the real Nazis in Ukraine?

Comedian Jon Stewart honored a member of the notorious neo-Nazi Ukrainian Azov Batallion with a “Heart of the Team” award at the annual Pentagon-sponsored “Warrior Games” held at Disney World in Orlando, Florida, on August 19—28.

Throughout the event, US army veterans and delegations from the armed forces of allied countries compete in various athletic events intended to celebrate the US military. First held in 2010, the games are essentially a propaganda effort by the Department of Defense, intended to promote militarism and cover up the bloody consequences of the US military’s wars for global hegemony.

The presence of the Azov veteran, Ihor Halushka, was first reported by Alexander Rubinstein for the Grayzone, an outlet that has been backing the oligarchic Putin regime in the war. When questioned by the Grayzone on who funded the presence of a neo-Nazi Azov Battalion member at a Department of Defense-sponsored event, the Pentagon refused to disclose who was footing the bill.

Halushka was not the only Ukrainian far-right element present. Along with US veterans and a team from Canada, 40 veterans from the Ukrainian Armed Forces participated in the games. The Ukrainian team included Yulia Paievska, a prominent former member of another notorious neo-Nazi paramilitary organization in Ukraine, the Right Sector. The Right Sector was heavily involved in the US-orchestrated 2014 coup that toppled a pro-Russian government in Kiev. Since 2018, Paievska has been a member of the Ukrainian armed forces. <Source>

Jon Stewart, a Jew, handing an award to a real Nazi? Unbelievable until you remember that Stewart is a progressive communist democrat and bows only before his party and its ideology.

Something stinks! And the smell appears to be coming from the Biden State Department and other government agencies. As for Victoria Nuland,  she is currently serving as Under Secretary of State for Political Affairs. Biden is still in the White House after confessing to the type of quid pro quo deal the Democrats used to impeach Donald Trump. And Hunter Biden, bag-man for the “Big Guy,” remains free.

Zelensky is crushing dissent in a country whose politics are reminiscent of 1950s Bulgaria. A free press is history.  His opponents are dead or in jail. He serves at the pleasure of people like Klaus Schwab and George Soros. He needs an enemy like Vladimir Putin to become rich and powerful beyond imagination. And here is Joe Biden and his communist Obama acolytes shoveling money into Ukraine while Biden looks forward to an authoritarian one-party system.

In my mind, Zelensky is a Putin-style grifter who finds himself at the end of the rainbow contemplating a golden future with his special interest pals.