SHORT & SWEET: IT'S THE DEMOCRATS WHO ARE DESTROYING AMERICA 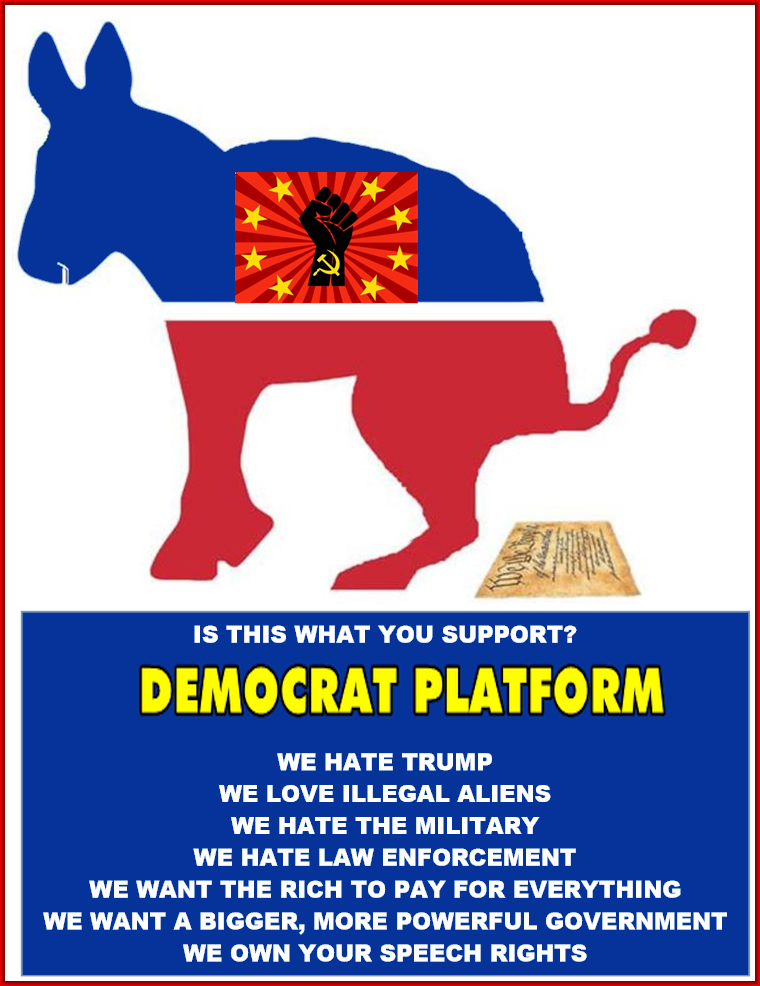 While the editorial opinion piece makes the points that our leadership is composed of idiots and that our political failures are rooted in a lack of virtue, I believe that our political failures can be ascribed more accurately to the Democrat Party and its infiltration by Communists who want to destroy America, her Constitution, the capitalist system, military, economy, and culture from within. With the malignant metastasizing cancer of communists infiltrating and destroying our institutions, controlled by progressive communist democrats.

Aided and abetted by the collapse of an independent free press and billionaires who owe their freedom and fortune to the government.

Military – let’s replace all of the top echelon of warfighters with “woke” leaders willing to compromise operational readiness with social engineering – or according to Thomas Sowell, “the art of replacing what works with what sounds good..”  Let’s make the military so untenable for warriors that the non-commissioned officers, the backbone of the military and carriers of institutional knowledge, resign or refuse to reenlist. Allowing armchair generals in the White House and State department to order the military to evacuate military strongholds before evacuating American citizens. Abandoning billions of dollars of sophisticated weaponry to Islamic terrorists and warlords.

Education – let’s introduce teachings that divide students by color into oppressors and the oppressed. Let’s sexualize young children with limited understanding and allow them to yield to a fantasy life codified in drugs and surgery. And, by all means, let’s adhere to the dictates of teachers’ unions that refuse to test teachers for competency and subject-matter knowledge while teaching anti-America revisionist history. Destroy the definitions of long-understood words so that individuals have difficulty in communicating concepts and return to cave-dwelling like hieroglyphics like emojis.

Crime – let’s ignore the rampant slaughter of citizens in our inner cities while disarming law-abiding citizens and de-funding the police who protect us against criminals, crazies, and terrorists. And, while we are at it, let’s release hardened criminals, a large proportion of whom will re-offend, into our communities to resume their criminal activities with relaxed laws on theft and no cash bail policies. Make the police so fearful of making an honest mistake that they withdraw and refuse to engage in proactive policing.

Inflation – let’s continue to spend trillions of dollars on political pork and nonsensical union-controlled projects that never will provide any return on investment and are technically obsolete before half-completed. Let’s flood the system with dollars in a period of inflation while production is curtailed and the unions continue to bollix-up supply chains.

Science – let's ignore scientific findings in favor of a narrative that supports the regime in power. Invent new genders. Turn mathematics from the language of science into the language of privilege, race, and the patriarchy.

Energy – Let’s kill our energy independence and severely cripple reliable, cost-effective energy production. Ignore massive price increases during a period of inflation. Screw homes requiring energy for heating and cooling. And, of course, outlaw the use of abundant, cost-effective natural gas piping in new construction. Let’s kill coal which was at the foundation of our industrial economy.

Media – Can you even imagine a media that is not fixated on Donald Trump and the need to sensationalize everything with click-bait headlines to attract and audience? Or entertainment without a political message?

Politics – Politicize everything. In what universe can you continue to support a president whose cognitive decline is endangering the national security.

I could continue, but it just pisses me off that Americans are so willing to cede historical gains for a dystopian future.

We are living in a transactional and adversarial environment where we have no friends, only interests, and our friends on one issue may be our enemies on another.

In politics, there are no perfect answers to an imperfect world. And, most often, the reality is that the only choice is the lesser of two evils.

The reality today is that while the GOP lacks answers and has few proactive policy prescriptions, the progressive communist democrats are the proximate cause of the growing evil and dysfunction in America.