ESG: DEMOCRATS ARE THE NEW COMMUNISTS 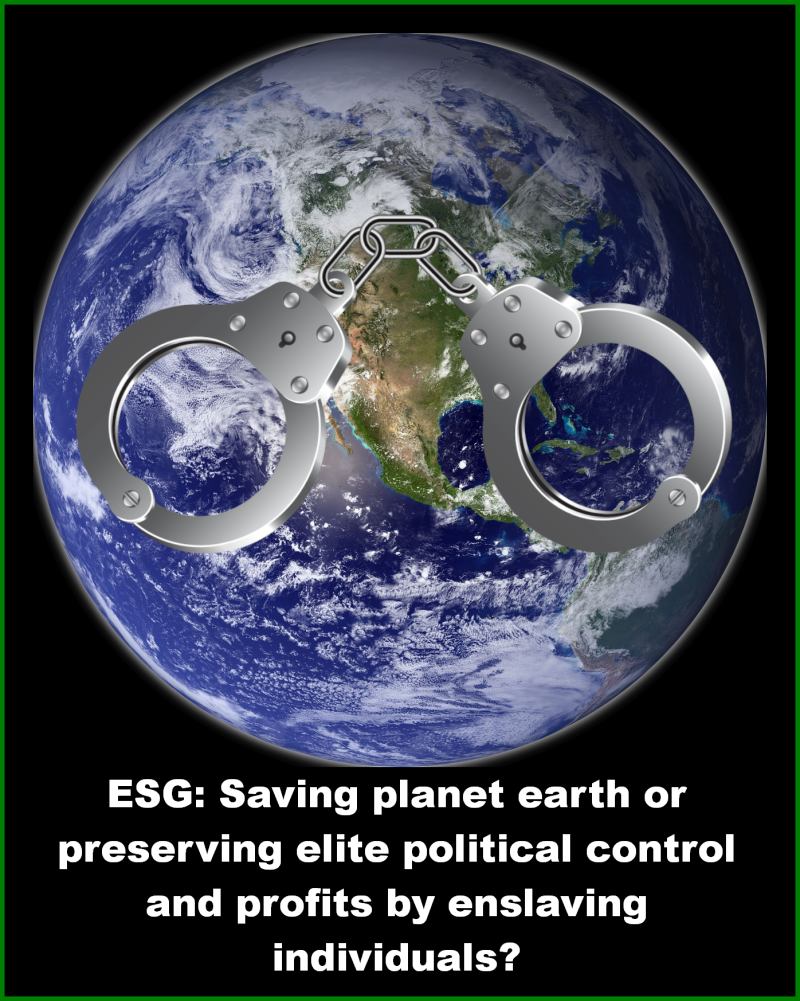 ESG is an acronym for Environmental, Social, and Governance, and in my opinion, a construct designed by academic elites to exert political power over our economy and culture with a minimum show of force and coercion.

For those of you who believe that ESG is part of the solution to save the planet, let us consider the fact that it is an instrument of control being implemented, with the assistance of the technology wizards, as a means of controlling the behavior and discontent of Chinese citizens who have lost thousands of years of culture to the Communist Party of China.

All of China's 1.4 billion citizens are about to be put under greater scrutiny as the country prepares to launch its 'social credit score' scheme.  The project rates citizens based on their behaviour, and those who do not play by the rules are added to a list that prohibits them from certain luxuries. Fears are growing regarding the ethical implications of scheme, with some questioning the morality of the big-brother culture. The government is likely to use its rapidly growing surveillance network to enforce the system, with some academics growing concerned that it may be manipulated to enforce the ideology of the ruling Communist party. <Source>

China’s ‘social credit system’ (SCS)—the use of big-data collection and analysis to monitor, shape and rate behaviour via economic and social processes—doesn’t stop at China’s borders. Social credit regulations are already being used to force businesses to change their language to accommodate the political demands of the Chinese Communist Party (CCP). Analysis of the system is often focused on a ‘credit record’ or a domestic ranking system for individuals; however, the system is much more complicated and expansive than that. It’s part of a complex system of control—being augmented with technology—that’s embedded in the People’s Republic of China’s (PRC’s) strategy of social management and economic development.2 It will affect international businesses and overseas Chinese communities and has the potential to interfere directly in the sovereignty of other nations.

China’s SCS augments the CCP’s existing political control methods. It requires big-data collection and analysis to monitor, shape and rate behaviour. It provides consequences for behaviour by companies and individuals who don’t comply with the expectations of the Chinese party-state. At its core, the system is a tool to control individuals’, companies’ and other entities’ behaviour to conform with the policies, directions and will of the CCP. It combines big-data analytic techniques with pervasive data collection to achieve that purpose.

Social credit supports the CCP’s everyday economic development and social management processes and ideally contributes to problem solving. That doesn’t make social credit less political, less of a security issue or less challenging to civil liberties. Instead, it means that the threats that this new system creates are masked through ambiguity. <Source>

In reality, ESG is Communist China’s social credit system disguised as an environmental solution to a sustainable future…

Major financial institutions and global organizations are using a corporate scoring system to create a type of social credit system designed to influence behavior and transform society, according to a director at a conservative think tank. Environmental, social and governance, or ESG, scores effectively grade social responsibility for entities ranging from corporations to governments. Factors like reliance on renewable energy sources or the strength of diversity policies can influence ESG scores."The point of it is to transform all of society, not just to transform what happens inside the walls of some big corporation," Justin Haskins, director of the Socialism Research Center and editorial director at the Heartland Institute.  "If you want to transform society through a social credit scoring system, you can do a lot of that through corporations and banks and financial institutions and Wall Street, but at some point, you probably are going to have to apply that to individuals as well."  <Source>

It’s here and a clear and present danger to our Constitution, safety and security, economy, and culture – and your pension!

"The same people who are supposedly using these ESG scores to make sure that they're only doing business with the moral companies, are also doing business with very immoral people like the government of China." BlackRock, the world’s largest asset manager and a major advocate for ESG scoring, has significant stake in China. In 2021, for example, it became the first wholly owned mutual fund business in the country, pushing billions of dollars into the world's second-largest economy, according to Reuters. <Source>

Across BlackRock, we provide all our investment teams with data and insights to keep them well informed of sustainability considerations. Each of our investment teams is responsible for implementing ESG approaches in line with its investment mandate and is required to have a formal ESG integration statement to underpin its respective approach. <Source>

Top CEOs are abandoning market-based decisions to appease small groups of vocal extremists on the far left who demand they bow down to their “woke” agenda. It includes appeasing climate alarmists, radical transgender activists and abortion fanatics who want to silence the vast majority of everyday Americans.

It’s not hard to see where it goes from here. By mandating liberal political concerns over fiducial responsibilities to shareholders, we are not far from a world where companies implement personal ESG scores for customers. This could be similar to a credit score, but these companies would be rating a person’s so-called ESG risk instead of rating creditworthiness. <Source>

With China owning or controlling a significant chunk of America’s infrastructure – not to mention a large number of politicians at the local, state, and federal levels, we are under attack. Primarily from the progressive communist democrats and corporations willing to subvert America to do business in China.

The next time you hear about ESG scores – think Communist China and say hell no!

The question I struggle with is, are we better off with data mining technology controlled by a few partisan oligarchs, or is it time to impose analog-type limits on an increasingly digital world? What I am seeing is a loss of freedom, independence, and resiliency as we become more reliant on the internet and crooked politicians.  We are isolating ourselves as individuals and ceding control to malignant, metastisizing institutions.  We are fast losing our sense of direction as we follow the herd to a shared oblivion in service to faceless bureaucrats and oligarchs.