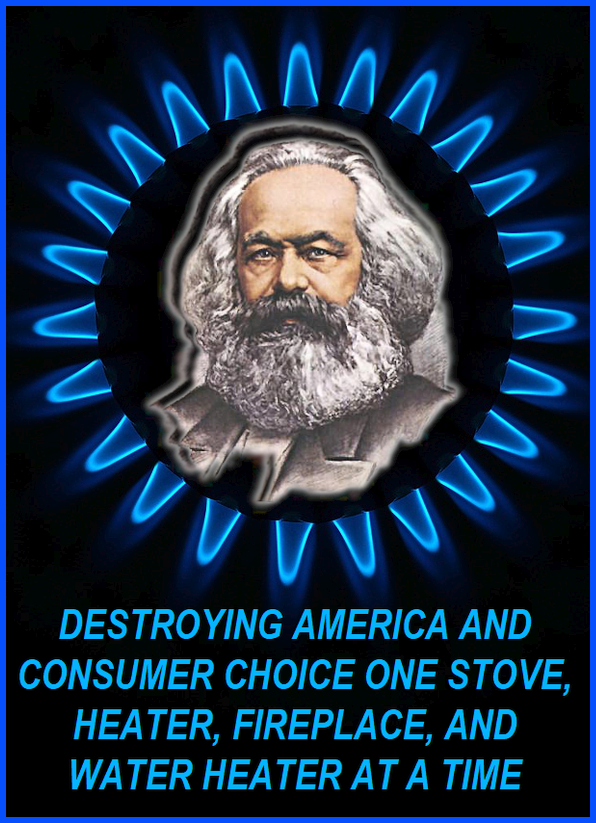 I wonder how many Americans recognize the future long-term damage being done to America, its citizens, and our lives by woke progressive communist democrat officials with their insane and nonsensical rules and regulations?

(3)  The progressive communist democrats are trying to destroy our industrialized energy-based economy by demanding the replacement of abundant, reliable, cost-effective fossil fuels with unreliable and costly so-called green alternatives such as solar and wind devices which produce only a fraction of what is required to sustain our economy and quality of life—demonizing nuclear energy based on decades-old technology and information and destroying dams and hydroelectric generating capacity.

The attack is being localized...

The End of the Gas Range and Fireplace? Local Governments Ban Natural Gas

Are you hoping for a shiny gas range in your new home? How about a fireplace as the main attraction of your new living room?

If so, don’t move to Los Angeles, because the city is phasing out natural gas hookups in all new residential and commercial buildings effective Jan. 1, 2023. But LA isn’t alone. It’s California’s 57th locality to introduce commitments to phase out natural gas, and many cities across the country are following suit.

In a misguided effort to reduce emissions, localities that pass ordinances like these totally ignore just how vital natural gas is not only for our broader energy landscape, but also for families and businesses.

Nationwide, natural gas accounts for roughly 38% of electricity generation, and around 177 million Americans use natural gas to heat their homes and cook their meals.

Beyond its prevalence, natural gas is also an affordable source of energy. Residential natural gas is estimated to cost almost one-quarter the price of electricity, which, according to the American Gas Association, adds up to an average annual savings of over $1,000 in household utilities.

And natural gas is a relatively clean source of energy. The U.S. Energy Information Administration notes that “burning natural gas for energy results in fewer emissions of nearly all types of air pollutants and carbon dioxide (CO2) than burning coal or petroleum products to produce an equal amount of energy.”

Yet, even with all of these benefits considered, environmental activists would rather push out-of-touch policies that drive up prices for families and businesses and wreak havoc on consumer choice.

Unfortunately, 77 other municipalities across the country have introduced or adopted some form of a ban on natural gas hookups under the banner of climate change. Some cities are even going so far as to require electrification retrofits in existing buildings and new remodels.

And on the East Coast, Maryland’s ambitious Climate Solutions Now Act included a provision that requires the development of all-electric building code recommendations in an effort to achieve the state’s lofty goal of net-zero carbon emissions by 2045.

Every jurisdiction is different, but these ordinances all share one thing in common: In eliminating the option for natural gas appliances, they ultimately force consumers to rely on more expensive, less reliable forms of energy. <Source>

The damage is long-term as the cost to retrofit a house with gas is a significant expense – and when considering multiple rental units, unlikely to happen. Being locked into exorbitantly high energy costs that only profit the utility shareholders.

The elite progressive communist democrats, immune from the consequences of their actions, are materially damaging America in an almost irreversible and immediately undetectable manner, thus crippling our economy and way of life in favor of an unproven scientific hypothesis.

The manufactured science findings are almost irrelevant at this point; the damage is not.

It is time to vote the progressive communist democrats out of office and demand answers from those seeking to destroy America from within.