Have you noticed that those who are advocating the use of Critical Race Theory are mostly Queer Marxists or those who personally profit from racial politics?

Individuals and organizations attempting to foment a racial revolution using identity politics to create a division in the populace and incentivize the destruction of morals, ethics, religion, tradition, and our most trusted institutions?

Openly attacking a culture of individuality and exceptionalism; favoring a collective culture of mediocrity and the need for governmental supervision of your thoughts and behavior?

One of these illustrations was created as a joke, the other as a training aid... 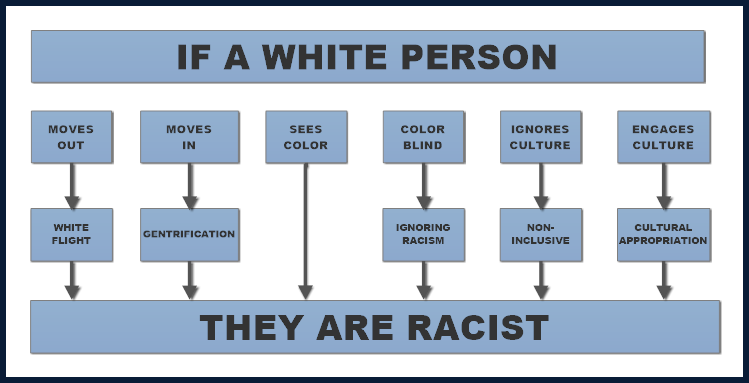 This is an actual training aid with the material taken from "Dismantling Racism: A Workbook for Social Change Groups" by Kenneth Jones and Tema Okun... 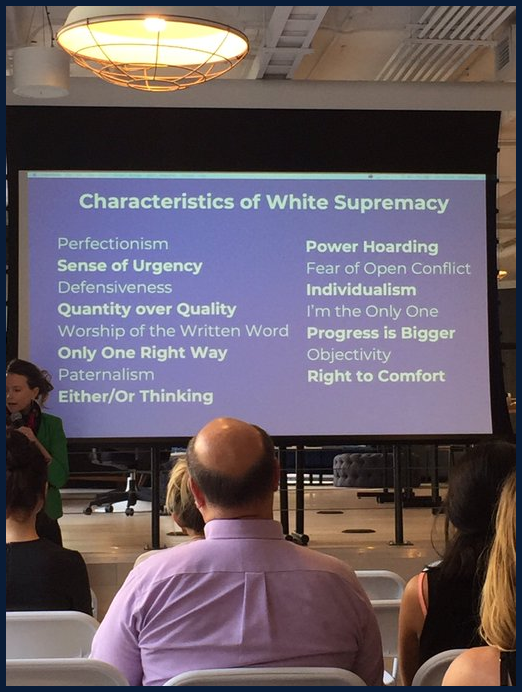 This nonsense is being used to wrest control of corporations from the shareholders and insert social justice warriors into the decision-making process as "stakeholders" with their artificial ESG (Environmental, Social, Governance) guidelines, rules, regulations, and ratings. Corporations are not democratic institutions run by a mobocracy or a source of funding for grifters.

In my world, you come to work with an essential skill set to perform a function, not to learn how to become a better person or political activist. Beyond safety issues, your employment should not be a Marxist social experiment. All that is wrong with today's work environment can be seen in the malignant influence of the modern union with its progressive communist democrat bias.

Both illustrations are representative of the malignancy that is the social justice movement.

Creating cultural Nazis in our schools and places of employment...

Rather than create a group of well-adjusted productive individuals, Critical Race Theory proponents are creating a group of dissatisfied, disaffected, and disillusioned individuals who have lost touch with reality and see everything through the lens of racism. They attribute their lack of achievement to systemic forces that ignore the fact that the system is controlled by the people who promote this CRT nonsense.

For those who have a vague understanding of CRT, it was created as an academic tool to analyze the impact of race on society, culture, and life to identify and improve race-based "social justice."

The concept of a tool has been hijacked into an openly Marxist and racist movement in its intent and practice, with the fundamental flaw of disadvantaging one racially-selected group to advantage another racially-selected group to redress historical grievances and explain why a particular segment of mostly U.S. Blacks are under-performers  -- and whose criminal behavior is disproportionate to their percentage representation in the general population.

Have you noticed that the CRT movement is aligned with the progressive communist democrats, the people who deny American exceptionalism, freedom, and the resilient independence that made this nation the greatest in the history of mankind? Primarily to distract the weak-minded from noticing that it was the Democrats who are associated with slavery, secession, segregation, and socialism?

All you need to know is that human nature is not easily overcome, people have different abilities, and the equality of opportunity builds societies, while equality of outcomes builds despotism. And the prime directive should be the "Golden Rule" of treating others as one wants to be treated.