THE COURT ENDS ON A RIGHTEOUS NOTE 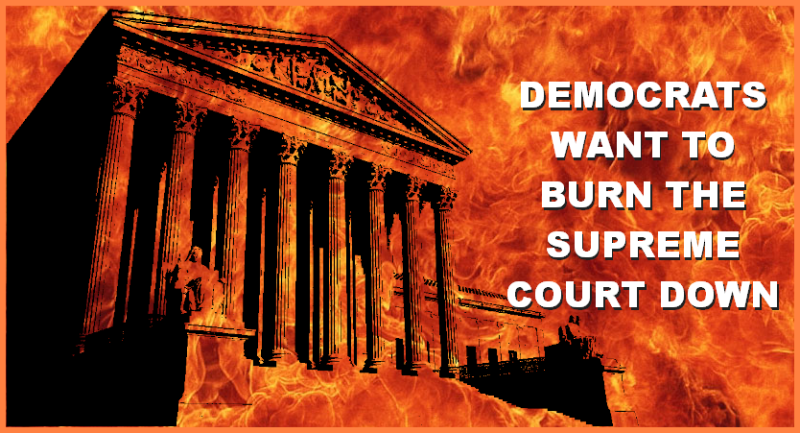 In a stunning display of allegiance to the United States Constitution, the Supreme Court concluded its term by righting several procedural wrongs and returning a measure of sanity to its deliberations. Also highlighted were the three liberal justices, voting as a block, demonstrating the type of muddled tortured thinking required to trash the Constitution to support their partisan agenda. Notably, the Court experienced the leak of a draft opinion, which spread anger throughout liberal-land and caused one U.S. Senator, Chuck Schumer, to rail openly on the steps of the Court, threatening two sitting Justices by name. A clear violation of the law as he attempted to interfere with an ongoing judicial process and intimidate Justices Gorsuch and Kavanaugh.

The progressive mainstream media is angry with the Court and continues to lie about the Court’s three most prominent decisions, the Dobbs decision returning the issue of abortion to the States where it rightfully belongs according to the Constitution’s Tenth Amendment, the Bruen Decision, which clarified the historical or legal understanding of the Second Amendment, and the Biden v. Texas decision, a matter dealing with administrative law and immigration that reaffirmed the President’s discretionary powers by distinguishing between obligation and discretion.

However, as consequential and decisive as these decisions may seem, they were eclipsed by the West Virginia v. Environmental Protection Agency decision, which reaffirmed the separation of powers between the Legislative and the Executive branches by curbing unilateral rule-making by Executive branch agencies without the specific direction of the Legislative branch of the federal government.

Most progressive communist democrats are going crazy after the Supreme Court ruled that the Environmental Protection Agency did not have the right to impose emissions standards on the nation unilaterally.

“Capping carbon dioxide emissions at a level that will force a nationwide transition away from the use of coal to generate electricity may be a sensible “solution to the crisis of the day.” New York v. United States, 505 U. S. 144, 187 (1992). But it is not plausible that Congress gave EPA the authority to adopt on its own such a regulatory scheme in Section 111(d). A decision of such magnitude and conse­quence rests with Congress itself, or an agency acting pur­suant to a clear delegation from that representative body.”

Why the progressive communist democrats are going crazy.

The decision demands that Congress reassert its Article II powers as the sole law-making legislative body. And that if they delegate rule-making authority to an Article I Executive Branch agency, they do it with clear intent and guidance, which spells out the limits of the agency’s power. Thus, the individual legislators are forced to vote on politically untenable issues that are likely to create controversy and consequences for those who put their ideology over the needs of the nation.

The legislators and their staffs now have to do their homework, craft legislation beyond vague outlines, and read the bills before signing them into law lest they suffer the consequences of their actions.

And most importantly, legislators can no longer shift power to the permanent bureaucracy that resides in the so-called deep state, which is immune to periodic elections when the opposition takes control. One reason that former President Obama pushed many of his nominees into becoming bureaucrats under civil service rules and regulations.

It’s about time that politicians had to work for a living, serving their constituents, or at least being accountable for their lack of diligence and poor outcomes.

It seems the progressive communist democrats were all about letting the bureaucrats make the tough choices without having to do any of the heavy lifting. Likewise, members of the GOP thought this was a swell idea as they could complain about the issue without having to craft their own legislation.

Perhaps this will also bring about the reform of Congressional rules, which exempt Congress from the consequences of its own legislation and empowers unaccountable corruption such as insider trading and relentless attacks on American citizens who participate in political dissent and processes that challenge sitting legislators?