THE PROGRESSIVE COMMUNIST DEMOCRATS REFUSE TO ASK "WHAT'S NEXT?"

While politicians with their preferred ideologies and pet projects come and go, few recognize and analyze the cumulative effects on our economy, culture, and national defense. Few things in America are based on the "long game," with individuals and organizations concentrating on maximizing short-term gains.

Because America, as a whole, is productive and relatively affluent, some use this disparity between countries, as well as individuals, to stick their collective fingers into America's pie with little or no pushback from the politicians -- especially politicians on the take as unofficial foreign lobbyists.

It is now time to get tough. Demand background checks for politicians and their staff. Improve asset disclosures. Eliminate insider trading protections. Demand that lobbyists, consultants, lawyers, accountants, and foreign-owned companies register under FARA (Foreign Agents Registration Act). Punish violators with restrictions on doing business with the government and fines and other penalties.

Back diplomatic words with actions, being prepared and willing to punch back twice as hard as an attacker. Power, respect, and fear should be the goal -- not love and kind words in the media.

We are in uncharted waters, an unthinkable political reality-- with an Administration more concerned with managing perceptions through media messaging and censorship than taking action to resolve emergent issues. The next election cycle and fundraising takes precedence over considering actions and asking what's next?

Consider reality! Will the United States come to the aid of Taiwan, or are we just content to "sell" them weapons that American taxpayers ultimately subsidized and paid for?

While change is inevitable and driven by the rapid advancement of technology and globalization, we see the type of change produced by bad actors. Bad actors, engaging in open information warfare and propaganda, are driving and enlarging divisions between Americans based on identity classes. Chaos is being weaponized, and tolerance for shock troops on the far left side of the political spectrum is becoming increasingly apparent.

Unfortunately, much of the chaos and angst is created by the progressive communist democrats and their media propagandists -- and enforced by unions that have become little more than communist front groups.

The progressive communist democrats have been stress-testing America for decades, with their violations of the law and social norms becoming increasingly egregious as time goes on. With little or no pushback from the media or the opposition.

Where is the 25th Amendment?

It is almost inconceivable that our enemies are better equipped, better trained, and better prepared, and their leadership is more patriotic and prepared to execute aggressive actions -- but this is where we are heading.

President Biden is incapable of executing his duties as the President of the United States and the Commander-in-Chief of the military.

The idea that Jake Sullivan, Susan Rice, Samantha Power, and other members of Obama's cadre of communists are running our military is shocking. Yet, given the actions of Secretary of Defense Lloyd Austin, Chairman of the Joint Chiefs of Staff General Mark Milley, and our recent surrender in Afghanistan, that appears to be happening.

How else can you explain what is happening in Iran, Ukraine, and North Korea, where the White House and State Department are micro-managing the show.

Vice President Harris was chosen based on her color, sex, and the fact she is so weak and incompetent as to provide Biden with an insurance policy against being replaced even while medically incapacitated.

Unfortunately, there remains a large group of individuals, mostly government workers and single white wine-drinking liberal women, who are isolated from the worst economic consequences by guaranteed employment, ever-increasing salaries and benefits, and cushy pensions. Conditions not found in the private sector. Unless these individuals are forced to deal with the reality facing most Americans, there will be little or no change as they continue to support the regime.

There can be no American dream without those who believe in American exceptionalism and are willing to defend America from its enemies, both foreign and domestic.

Our President's success should be our success. His failure is our failure. 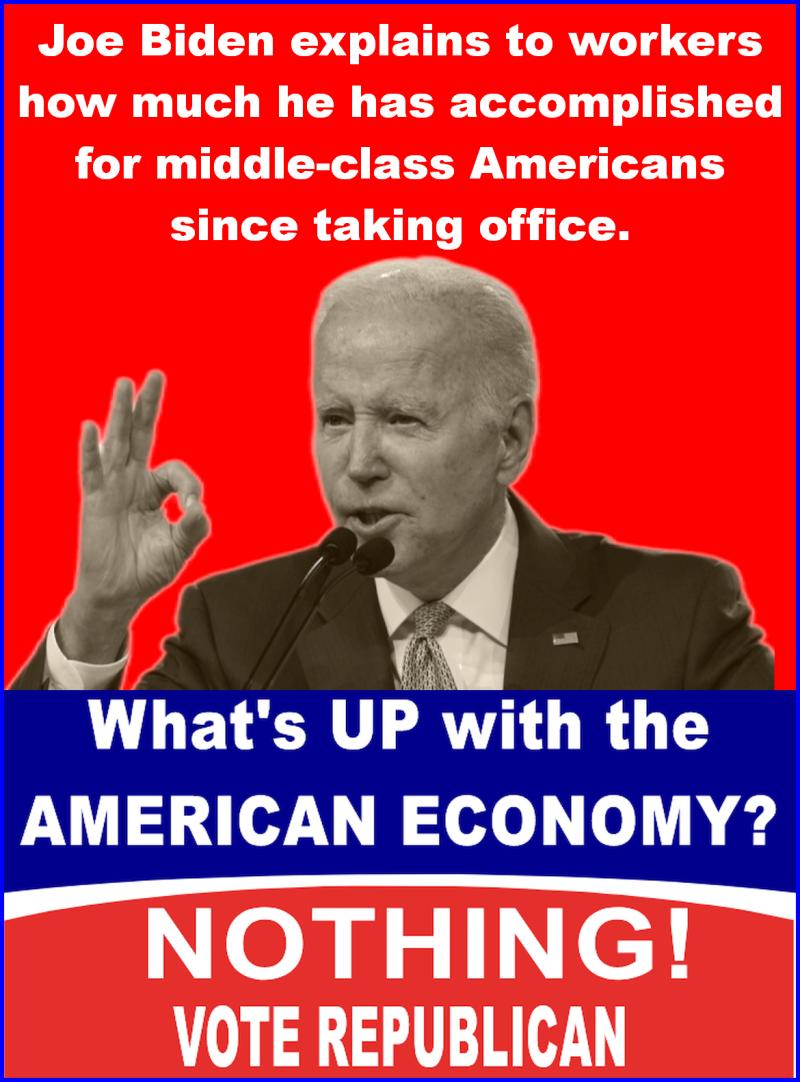