THIS HORRIFIC SCHOOL SHOOTING WAS THE FAULT OF AN INDIVIDUAL, NOT THE LAW-ABIDING COMMUNITY OF RESPONSIBLE GUN OWNERS

Today we all saw evil perpetrated on at least nineteen innocent children and two adults by a deranged 18-year-old gunman who opened fire at a Texas elementary school.

(1)  Pray for those killed or injured and their family and friends.

(2)  Realize that this was the act of an individual, not a weapon.

(3)  There is no way to protect against criminals, crazies, or terrorists who will not respect the law or societal norms.

(4)  Perhaps the only thing that could have been done to prevent this shooting was to notify the appropriate authorities of a potential threat posed by the individual. Maybe?

(5)  Do not say the shooter’s name and shun the repetitive media – and politicians seeking to get facetime before the cameras and microphones. Especially those briefings where members of every agency involved speak and say nothing.

(6)  Note who is trying to politicize this tragedy and shun them.

Former President Obama issued a scathing statement following the shooting at an elementary school in Texas on Tuesday, pointing a finger at the Republican Party and the gun lobby for their soft response on tougher gun measures.

“Across the country, parents are putting their children to bed, reading stories, singing lullabies—and in the back of their minds, they’re worried about what might happen tomorrow after they drop their kids off at school, or take them to a grocery store or any other public space,” Obama wrote in a Twitter thread on Tuesday, also expressing his condolences to the families who lost loved ones in the incident.

“Michelle and I grieve with the families in Uvalde, who are experiencing pain no one should have to bear,” he wrote. <Source>

Remember, you are not responsible for this shooting and should not be penalized by politicians seeking to disarm you and destroy the 2nd Amendment remedy for tyranny. 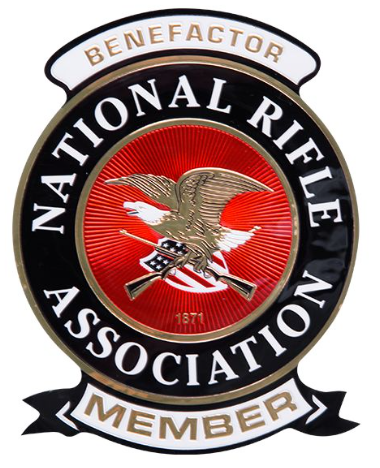 CAN WE TRUST THE UNITED STATES POSTAL SERVICE

Who can you trust today? 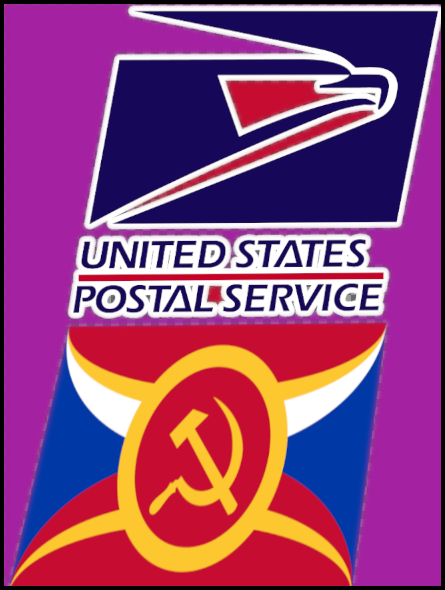 As we have witnessed the progressive communist democrat regime's compromise of our nation's premier intelligence and law enforcement agencies, I must now ask a previously unimaginable question: can we trust the United States Postal Service?

(1)  The USPS is a quasi-governmental agency where governance rights and responsibilities appear ill-defined and muddled.

(2)  The management of the USPS is significantly impacted by its unions that have long-standing ties to the progressive communist democrat regime.

(3)  With the widespread use of mail-in ballots, the USPS has a significant potential to fraudulently disrupt our elections.

(4)  The USPS has significant opportunities to covertly and overtly surveil the American public.

The law enforcement arm of the U.S. Postal Service has been quietly running a program that tracks and collects Americans’ social media posts, including those about planned protests, according to a document obtained by Yahoo News.

The details of the surveillance effort, known as iCOP, or Internet Covert Operations Program, have not previously been made public. The work involves having analysts trawl through social media sites to look for what the document describes as “inflammatory” postings and then sharing that information across government agencies.

“Analysts with the United States Postal Inspection Service (USPIS) Internet Covert Operations Program (iCOP) monitored significant activity regarding planned protests occurring internationally and domestically on March 20, 2021,” says the March 16 government bulletin, marked as “law enforcement sensitive” and distributed through the Department of Homeland Security’s fusion centers. “Locations and times have been identified for these protests, which are being distributed online across multiple social media platforms, to include right-wing leaning Parler and Telegram accounts.” <Source>

(5)  There are no specific laws protecting individuals' privacy that are enforceable and carry penalties. There are so many exceptions to medical privacy laws under the HIPAA (Health Insurance Portability and Accountability Act) security rule that national standards to protect sensitive patient health information from being disclosed without the patient's consent or knowledge are virtually meaningless. Each application's Terms of Service nullifies your rights or forces you into costly and time-consuming arbitration to redress any harm.

And now, the United States Postal Service wants to profit by becoming the nation's digital signature and address verification authority and agency…

In a new report on the role of the US Postal Service (USPS) in identity verification, the Office of the Inspector General for the agency has pushed for it to have an expanded role in the collection of biometric data and the rollout of digital ID.

The report suggests extending the provision of in-person biometric data collection to the 4,800 locations where the USPS already provides a Passport Acceptance Service to the US Department of State. It also notes that the USPS could provide biometric and verification services to other government agencies.

In an example of how the USPS’s expanded verification services could be utilized, the report proposes that the USPS could provide online name and address validation to government agencies by providing these agencies with a “confidence level” that a person lives at a specific address. The USPS notes that this confidence level could be generated by querying national databases such as the USPS’s Address Management System (AMS), the National Change of Address (NCOA) database, and the USPS’s Informed Delivery database.

The report also pushes for the USPS’s Informed Delivery service (a service that gives subscribers a digital preview of their incoming mail and currently has 47 million subscribers) to potentially be expanded into a digital ID verification service. Additionally, it suggests legislative reforms that would allow the USPS to provide ID verification and digital ID services to the private sector.

If these legislative reforms are carried out, the report proposes that the USPS’ digital ID service could be rolled out as an online single sign-on service for government services and a mobile app that can provide online and in-person verification for public and private sector services. One of the potential private sector applications described in the report is bank loan applicants using the mobile app to verify their identity.

Not only does the report propose that the USPS have a more prominent role in biometric data collection and digital ID services but it also admits that the USPS has already partnered with the General Services Administration (GSA) and the Federal Bureau of Investigation (FBI) on biometric data collection pilots. <Source>  The report can be found here.

As much as I like my postal carrier and the people at my local post office, both of which are the happy face of the Postal Service, they do not set policy. And I must confess, early on in the days of digital signatures, I thought it was an excellent idea to allow the USPS to act as a signature authority.

But, after seeing what happened with the DNI, NSA, CIA, DOJ, and FBI, I no longer want to cede more power to the corrupt regime that has corrupted an election, brought about an economic catastrophe, and has endangered the health of America with their disinformation on mandatory vaccinations.

There is little or no doubt in my mind that the highly-politicized Postal Service may become a clear and present danger to American citizens. In essence, a single point of contact where your communications can be censored or canceled and the very identity you need to function in today's digitized world erased — putting your entire world at risk, including freedoms, finances, and healthcare. Think of the DMV magnified a thousand-fold.

Until we de-politicize the regime and severely punish abuses of power, I would fight against any federal or public-private entity from assuming additional gatekeeping powers. Especially if the government farms the actual services to politically-connected services controlled by tech tyrants.  Especially those who demand you sign their unilateral terms of service agreements that protect the regime and strip you of any rights and protections. Further shielding the government and individual evildoers within the government from being held accountable for their harmful actions is unacceptable.

We are getting more screwed as we avoid self-reliance and move toward the progressive communist democrat's (and GOP globalist's) collective nanny state.

We need to demand a Digital Bill of Rights that synchronizes our analog and digital worlds.

BEFORE YOU PANIC OVER MONKEYPOX

The progressive communist democrats may be gearing up to make monkeypox “a thing” for the 2022 mid-term elections or perhaps a distraction from the upcoming avian flu for the 2024 presidential elections. 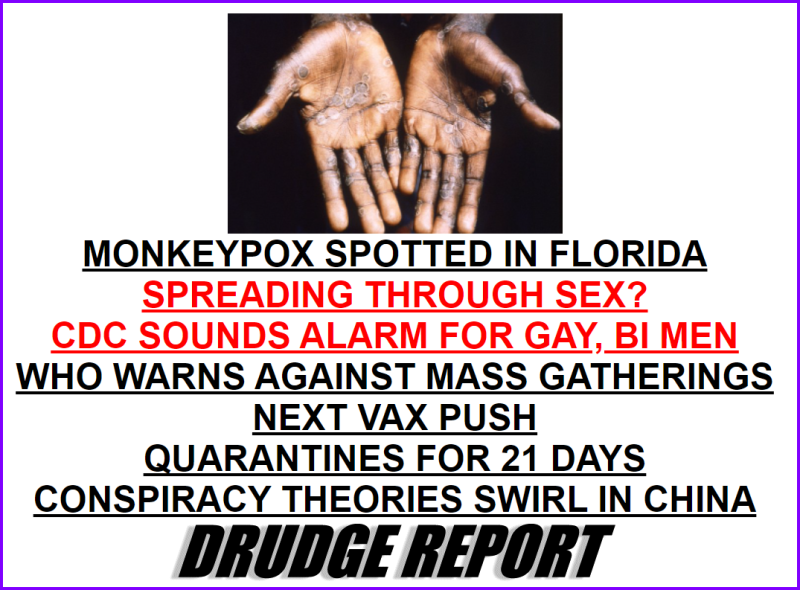 The Centers for Disease Control and Prevention on Monday alerted gay and bisexual men that monkeypox appears to be spreading in the community globally, warning people to take precautions if they have been in close contact with someone who may have the virus and to be on the lookout for symptoms.

Dr. John Brooks, a CDC official, emphasized that anyone can contract monkeypox through close personal contact regardless of sexual orientation. However, Brooks said many of the people affected globally so far are men who identify as gay or bisexual. Though some groups have greater chance of exposure to monkeypox right now, the risk isn’t limited only to the gay and bisexual community, he cautioned.

“We want to help people make the best informed decisions to protect their health and the health of their community from monkeypox,” Brooks said.

The World Health Organization has identified about 200 confirmed or suspected monkeypox cases across at least a dozen countries in Europe and North America in recent days.

I wonder what noted HIV/AIDS expert, Dr. Anthony Stephen Fauci, the renowned physician-scientist and immunologist and the current Director of the National Institute of Allergy and Infectious Diseases -- and Chief Medical Advisor to the President – has to say? 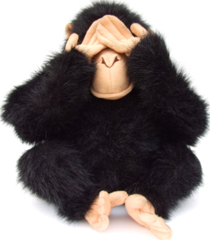 Fauci recommends stopping the spread of monkeypox by ignoring the media and covering your eyes, ears, and mouth -- and of course, other bodily parts as necessary.