BEHIND THE BIDEN REGIME LIES AN ORWELL 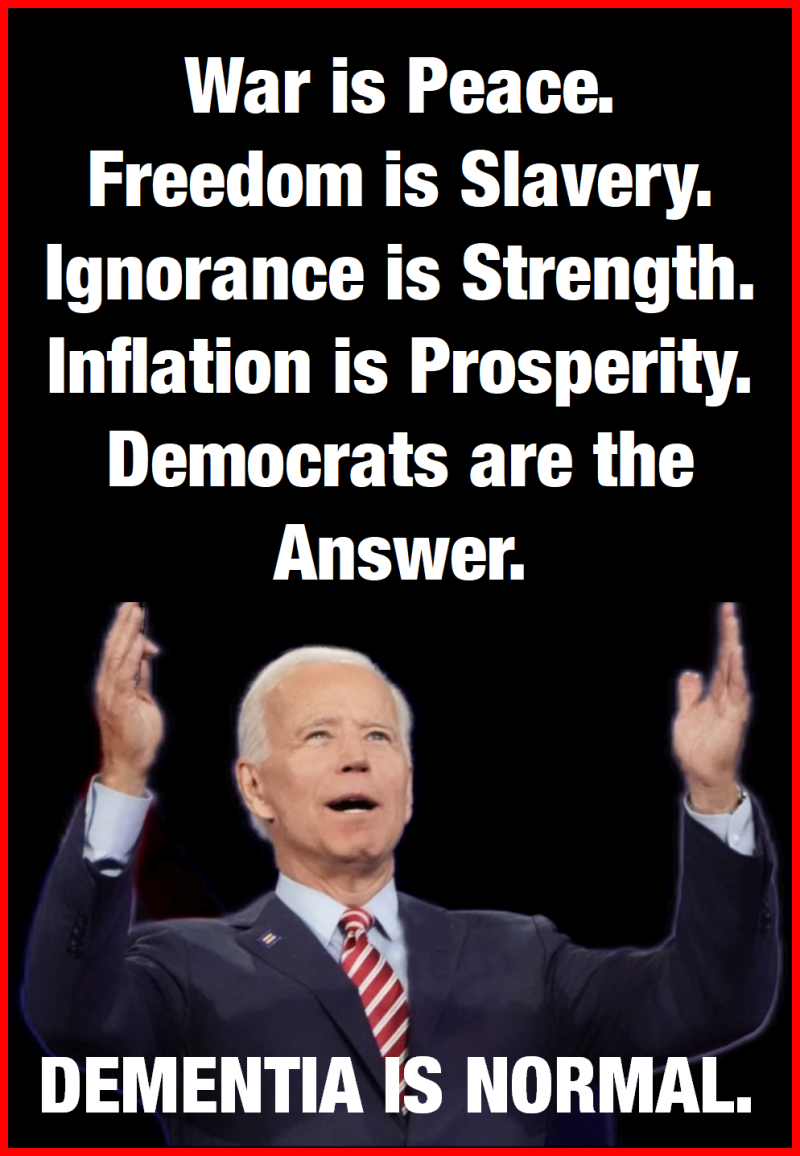 2020 ELECTION FRAUD IS REAL AND PROVABLE. WHERE IS THE DEPARTMENT OF JUSTICE AND THE FBI?

There is now credible, evidence-backed, probable cause to believe that there was a coordinated attack on the 2020 election… 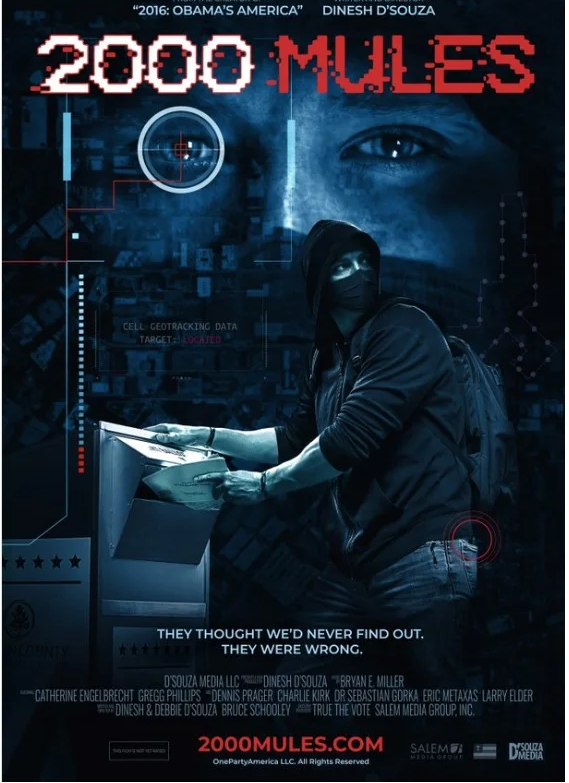 The recently released Dinesh D’Souza documentary, 2000 Mules, is not evidence in and of itself but presents a verifiable “probable cause” for the United States Department of Justice to begin an immediate investigation of the allegations of massive fraud in the 2020 election.

The underlying evidence, the data provided by True the Vote of election violations using proven GPS geo-location technology and recorded video of apparent illegal ballot handling, is not only enough for probable cause, but the immediate issuance of Grand Jury subpoenas for specific individuals and organizations.

Unlike most of the bullshit speculative election fraud analysis provided by shady attorneys and a cast of laughable fools, this film is proof of evidence that is in the possession of various State Governments as well as the federal government-- with the documentary providing a timed guide to the various election frauds committed.

And this is only part of the criminal activity. To rule out the accidental capture of innocent individuals, True the Vote specified that the individuals highlighted in the film must have committed the same offense ten or more times – thus ruling out causal data capture.

Look for the Democrat attack on D'Souza and the documentary under the guise of fact-checking to censor social media conversations and the platform cancellation of commenters.

But that’s based on faulty assumptions, anonymous accounts and improper analysis of cellphone location data, which is not precise enough to confirm that somebody deposited a ballot into a drop box, according to experts.

The movie was produced by conservative filmmaker Dinesh D’Souza and uses research from the Texas-based nonprofit True the Vote, which has spent months lobbying states to use its findings to change voting laws. Neither responded to a request for comment.

Here’s a closer look at the facts.

CLAIM: At least 2,000 “mules” were paid to illegally collect ballots and deliver them to drop boxes in key swing states ahead of the 2020 presidential election.

THE FACTS: True the Vote didn’t prove this. The finding is based on false assumptions about the precision of cellphone tracking data and the reasons that someone might drop off multiple ballots, according to experts.

“Ballot harvesting” is a pejorative term for dropping off completed ballots for people besides yourself. The practice is legal in several states but largely illegal in the states True the Vote focused on, with some exceptions for family, household members and people with disabilities.

True the Vote has said it found some 2,000 ballot harvesters by purchasing $2 million worth of anonymized cellphone geolocation data — the “pings” that track a person’s location based on app activity — in various swing counties across five states. Then, by drawing a virtual boundary around a county’s ballot drop boxes and various unnamed nonprofits, it identified cellphones that repeatedly went near both ahead of the 2020 election.

If a cellphone went near a drop box more than 10 times and a nonprofit more than five times from Oct. 1 to Election Day, True the Vote assumed its owner was a “mule” — its name for someone engaged in an illegal ballot collection scheme in cahoots with a nonprofit.

The group’s claims of a paid ballot harvesting scheme are supported in the film only by one unidentified whistleblower said to be from San Luis, Arizona, who said she saw people picking up what she “assumed” to be payments for ballot collection. The film contains no evidence of such payments in other states in 2020.

Plus, experts say cellphone location data, even at its most advanced, can only reliably track a smartphone within a few meters — not close enough to know whether someone actually dropped off a ballot or just walked or drove nearby.

“You could use cellular evidence to say this person was in that area, but to say they were at the ballot box, you’re stretching it a lot,” said Aaron Striegel, a professor of computer science and engineering at the University of Notre Dame. “There’s always a pretty healthy amount of uncertainty that comes with this.”

Similarly, there are plenty of legitimate reasons why someone might be visiting both a nonprofit’s office and one of those busy areas. Delivery drivers, postal workers, cab drivers, poll workers and elected officials all have legitimate reasons to cross paths with numerous drop boxes or nonprofits in a given day.

True the Vote has said it filtered out people whose “pattern of life” before the election season included frequenting nonprofit and drop box locations. But that strategy wouldn’t filter out election workers who spend more time at drop boxes during the election season, cab drivers whose daily paths don’t follow a pattern, or people whose routines recently changed.

In some states, in an attempt to bolster its claims, True the Vote also highlighted drop box surveillance footage that showed voters depositing multiple ballots into the boxes. However, there was no way to tell whether those voters were the same people as the ones whose cellphones were anonymously tracked. <Read More>

Not only is geo-location precise enough to establish “probable cause,” it has been used in numerous court proceedings and defended by government expert witnesses. The paired video only adds to the credibility of the geo-location data. The question they never address is what would compel the same person to visit multiple widely-spaced ballot drop boxes on the same evening in the dead of night and take pictures of their hands dropping multiple ballots into the box, especially in states prohibiting ballot harvesting. And using drop boxes where the “chain of custody” documents are missing or misleading. It should also be noted that much of Professor Aaron Striegel’s work has been funded by government and progressive sources.

Rather than trying to convince anyone that election fraud did occur in 2020, the fraud was massive enough to steal the election for the progressive communist democrats, and that there are recognizable and prosecutable individuals involved, I will leave it to you to see the film on your own and then take action to demand a formal investigation.

The film provides irrefutable evidence that our election system is vulnerable to massive fraud and that safeguards must be put in place before the 2022 general election and especially the 2024 election.

Personally, I would like to see the Democrat Party held responsible for the Trump/Russia Spygate hoax, the subversion of Congress, and the two phony impeachments of President Trump.

See the movie at your earliest convenience.