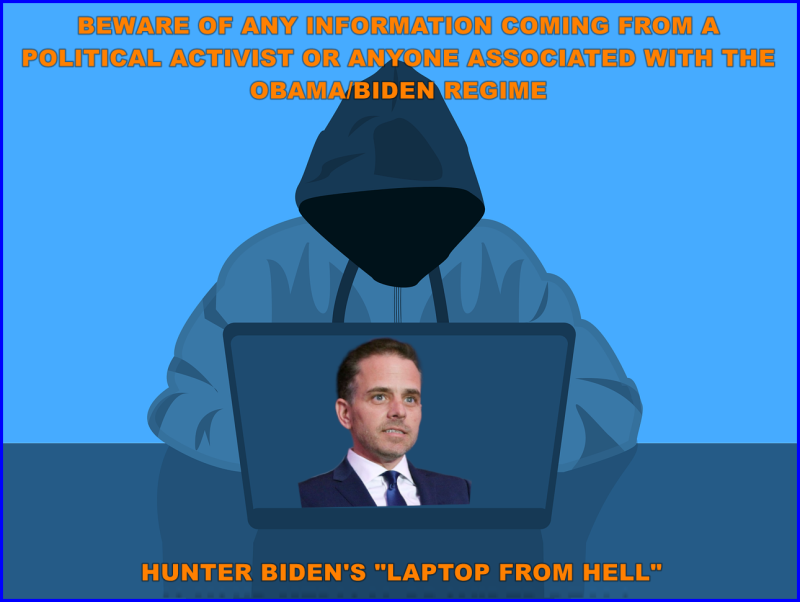 There is little or no doubt in my mind that the intelligence and law enforcement agencies that are infiltrated by bad actors seeking to protect former President Barack Obama, former Secretary of State Hillary Clinton, and various corrupt individuals and their agencies might be engaging in evidence tampering. The type of evidence tampering that could be used in a mainstream media/social media disinformation campaign to distract from the real evidence and create doubt in an eventual jury pool.

A whistleblower who's fled the United States for Switzerland has vowed to drop '450 gigabytes of deleted material' from Hunter Biden's abandoned laptop, which he says he also gave the the Washington Post, New York Times, and Sen. Chuck Grassley - all of whom he says sat on it for months.

For the past two weeks, former Steve Bannon War Room co-host Jack Maxey has been hiding in Zurich, where he told the Daily Mail he's been working with IT experts to dig more data from Hunter's 'laptop from hell,' and that he'll post it all online in a searchable database in the coming weeks.

"I came here so that we could do a forensic examination of Hunter's laptop safely in a country that still respects human liberty and the ideals of liberal democratic principles," he told the Mail. "I do not believe this would have been possible inside the United States. We had numerous attempts on us from trying to do things like this there." <Read more at ZeroHedge>

(2)  Remember all of the technology claims of data manipulation by shady individuals like Attorneys Sidney Powell, L. Lin Wood, and a host of other dodgy characters whose claims fizzled in the light of day?

(3)  We have a statement from the actual owner of Hunter Biden’s laptop, Delaware computer repairman John Paul Mac Issac.

Exclusive: Here Is the Statement from John Paul Mac Isaac on Recent Hunter Biden Laptop Reports that Was Rejected by a Media Distribution System from Being Sent Out

“In 2019, Hunter Biden brought 3 damaged laptops into ‘The Mac Shop’, the repair shop I owned in Delaware, to recover data. Hunter left with 2 of the laptops and the 3rd laptop remained while I attempted to salvage data off of his non-removable SSD.

In order to recover data from the laptop, I had to move files and folders by hand as the laptop would only stay on intermittently. Each time the laptop would shut down, I would reopen it and be forced to view the file contents to verify the recovery; contents I found deeply disturbing.

When Hunter Biden did not return to pick up the third laptop, I attempted to hand it over to the authorities. Eventually, the FBI collected the laptop but seemingly failed to act on its contents. Eventually, I was able to contact Rudy Giuliani’s office and mailed them a copy.

I cannot comment on the authenticity of the newly released data. There are numerous laptops out there and an iCloud Drive that likely holds information for which I am not privy. It is possible that the newly released files were obtained from one of those other sources,” explained Mac Issac.

“With the media finally acknowledging the authenticity of the laptop and contents of the drive, I am fearful that the newly discovered information has not been properly authenticated to confirm its validity – as the hard drive in my possession has. Proper vetting and investigation of this data is necessary, as not give those who would like to discredit and debunk the Hunter Biden laptop a way to claim the information is manufactured, faked, or altered.

For the sake of preserving the integrity of our country and presenting the truth to the American people, I hope any newly released information is fully authenticated.  The only entity capable of corroborating the data is the FBI as they have been in possession of the original laptop since December 9th 2019,” concluded Mac Issac. <Read more at The Gateway Pundit>

(4)  We find that the media moguls and tech tyrants are suppressing the Mac Issac news release, often indicating its authenticity and an attempt to deceive or distract the public.

A press release featuring Mac Issac’s above statements through a distribution system was recently rejected and forbidden from being sent, which tell us that tech oligarchs are still working the coverup for Team Biden.

(5) The poison pill disinformation campaign is a favorite tactic of state actors.

A Poison Pill disinformation campaign is the mixing of legitimate and illegitimate (spurious) information with the goal of dismissing or discrediting legitimate information. Legally, to introduce doubt into the evidentiary process to secure an acquittal, a mistrial, or to mitigate sentencing.

In this case, to trick the mainstream and social media to widely propagate questionable information which may taint an investigation, grand jury proceedings, a trial, or further investigation by creating a hall of mirrors that has one questioning the authenticity of what one is seeing.

I believe shenanigans are afoot as the mainstream news media suddenly reversed their narrative when rumors of a possible Hunter Biden indictment occurred.

How effin’ stupid do you have to be to ignore sworn testimony, authenticated documents, and then-Vice President Joe Biden’s recorded confession of his Ukraine quid pro quo – the same charge they used to successfully but falsely impeach Donald Trump.

Caveat: It is possible that Jack Maxey may have used login credentials found on the laptop to access Hunter Biden’s email account or other online sources. If so, it is likely that Maxey may have violated several laws in accessing accounts to which he had no legitimate access. It is also possible that he has acquired another laptop or portable storage drive from another source.

Whatever the case, we need to remain vigilant while corrupt individuals are running the show. 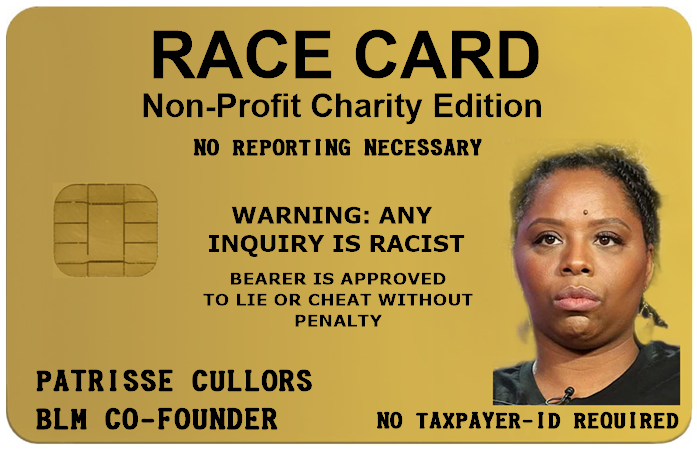 It sure does pay to sow racial division in this country. Just ask Black Lives Matter (BLM) co-founder Patrisse Cullors, but don’t criticize her alleged financial mismanagement and questionable spending decisions while you’re at it.

Cullors admitted to not knowing what a 990 was, even though it’s a standard document for nonprofits. She claimed it’s “being weaponized against” black women because “many people don’t even know and honestly don’t care about” the form.

At an event in Washington state last week, as part of a week-long residency with the Vashon Center for the Arts, Cullors made clear that if you criticize her or the movement, you’re a racist standing in the way of black women organizers.

Despite the ongoing claims of BLM financial mismanagement, Cullors argues there is a “right-wing” attack that she labels “a misinformation and disinformation effort to not just challenge Black Lives Matter and the organization,” but all black organizers. <Source>

It appears, at least to me, that Jesse Jackson and Al Sharpton, both grifters and corporate extortionists, now appear to be second-class progressive communist democrat grifters. Far surpassed by the corporate grift of Patrice Cullors and her communist front group, Black Lives Matter.

Ironically, corporate America is funding the communist that would destroy the capitalist system that powers their industry. But then again, most corporate leaders are little more than useful idiots.