MICROSOFT EDGE: IMPROVE YOUR USER EXPERIENCE BY GIVING US ACCESS TO YOUR LIFE 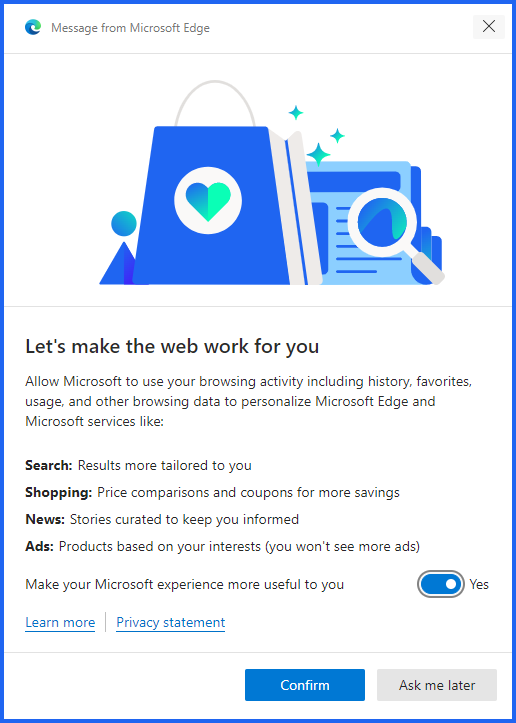 Microsoft’s default position has always been to ignore its intrusive corporate surveillance (aka “telemetry”) because it is all about "improving the user experience" rather than selling customer-targeted advertising.

This default position is troubling because browsers are increasingly able to access device sensors, including cameras, microphones, accelerometers, GPS location, and applications that can gather biometric samples. Not only is it possible to locate your position, but confirm it is, indeed, you.

It should not surprise anyone that Edge sends unique hardware identifiers to Microsoft which cannot be easily changed or deleted, and all trackers are enabled by default in all Edge installations to share details of every webpage you visit with their services. All these browsers use autocomplete feature to send web addresses to their services in real-time.

According to a browser analysis, from Douglas Leith with the School of Computer Science and Statistics at Trinity College in Ireland, Edge sends privacy-invasive telemetry to Microsoft’s back-end servers — including “persistent” device identifiers and URLs typed into browsing pages. <Source>

From a privacy perspective, Microsoft Edge and Yandex [A browser linked to Russia] are qualitatively different from the other browsers studied. Both send persistent identifiers than can be used to link requests (and associated IP  address/location) to back-end servers.

Edge also sends the hardware UUID of the device to Microsoft and Yandex similarly transmits a hashed hardware identifier to back-end servers.

As far as we can tell this behavior cannot be disabled by users. In addition to the search autocomplete functionality that shares details of web pages visited, both transmit web page information to servers that appear unrelated to search autocomplete.

Before accepting any default, please read the fine print carefully and be sure what the terms, conditions, and weasel words imply and how they impact your personal privacy. And, like Bill Clinton questioning what the meaning of the word ‘is’ is, make sure you understand the meaning of yes/no and on/off options. Yes – you want the option “off” and inactive or “yes,” you agree the option should be “on” and active.

TREASON? GIVING AID AND COMFORT TO OUR ENEMIES

There is no doubt that Iran is a hostile foreign power engaged in an undeclared war against the United States.

Iran is the largest sponsor of state terrorism and is the proximate cause of American deaths by engineering and manufacturing IEDs.

The Pentagon is upping the official estimate on the number of U.S. troops in Iraq who were killed by Iranian-backed militias, now putting that number at at least 603. That means roughly one in every six American combat fatalities in Iraq were attributable to Iran. These casualties were the result of explosively formed penetrators (EFP), other improvised explosive devices (IED), improvised rocket-assisted munitions (IRAM), rockets, mortars, rocket-propelled grenades (RPG), small-arms, sniper, and other attacks in Iraq. <Source>

Likewise, there is no doubt in my mind that former President Obama, an America-hating, Israel-hating, communist Manchurian Candidate, has participated in a bogus non-treaty that failed to curb Iran’s development of ICBMs which are capable of striking the continental United States and continuing development of nuclear weapons in return for billions of dollars that stabilized an Iranian economy on the brink of collapse and provided funding for additional development of weapons of war and continuing state-sponsored terrorism.

Unlike other countries that possess or desire to possess nuclear weaponry, Iran has a singular death wish that posits that a nuclear apocalypse – primarily directed at Israel – will bring about the return of the Twelfth Imam.

Because, Shi’ite Muslims believe the Twelfth Imam, or Mahdi, the last in a line of saints, descended from Ali, the founder of their sect and vanished down a well in 941 AD. According to this belief, he went into a state of occulation’ like the sun hiding behind the clouds. The story goes on and claims that after a stormy period of apocalyptic wars, the clouds will part, and the sun (the Mahdi) will be revealed. They believe that when he is released from his imprisonment, the entire world will submit to Islam. This belief is the driving force behind Ahmadinejad, Ayatollah Khameni, and the majority of the central figures in the Iranian government. <Source>

The primary reason that Israel has not attacked Iran’s nuclear facilities, deeply buried in fortified bunkers, is that they lack bunker-busting bombs and the heavy-lift capacity to deliver bunker-buster bombs.

Now, the Biden Administration is carrying on Obama’s plan to destroy Israel… 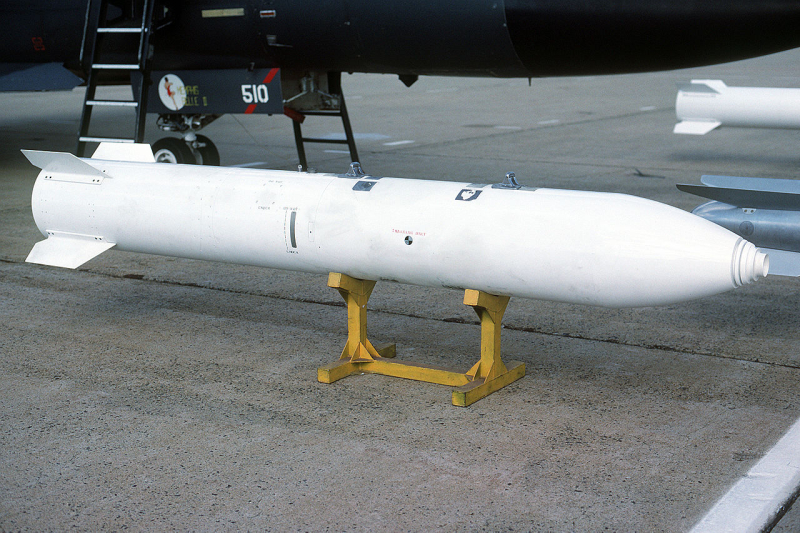 The Pentagon will eliminate the sole nuclear gravity bomb in the U.S. strategic weapons arsenal capable of blasting deeply buried underground structures as part of the Biden administration‘s review of strategic weapons policy, according to U.S. officials.

The retirement of the B83 bomb, a megaton-class weapon delivered by B-2 stealth bombers, was disclosed to Congress last month as part of the Biden administration’s classified nuclear posture review, a major reassessment of strategic forces and their employment. The bomb is “costly to maintain and of increasingly limited value,” a senior defense official told The Washington Times.

The decision to cancel the weapon carries what defense officials say is the increasing challenge for U.S. planners to deter nuclear adversaries like China, North Korea and Russia. All three states are expanding their nuclear forces with the addition of new strategic weapons and warheads.

“The Nuclear Posture Review (NPR) considered the need to hold at risk adversary hard and deeply buried targets,” the defense official said. “In reviewing the diminishing role of the B83-1 in accomplishing this task, the NPR concluded that this weapon should be retired.”

Supporters of the B83 say it is still needed for deterring China, which has built a vast network of underground tunnels estimated to be 3,000 miles snaking throughout the country. The tunnel system, dubbed the “Underground Great Wall,” is used for producing and storing China‘s growing nuclear arsenal.

In addition to the B83, the administration’s proposed budget cancels plans for a nuclear sea-launched cruise missile, known as SLCM-N. Defense sources said the retirements of both the B83 and canceling the SLCM-N were opposed by U.S. Strategic Commander Adm. Charles Richard. <Source>

I can see the Biden Administration, run by a cadre of Obama’s acolytes, preventing a strike on Iran’s nuclear facilities.

Until this bunker-buster capability is restored, America will be weakened and our deterrence posture degraded. Of course, Secretary of Defense Lloyd Austin and Mark Milley, the 20th chairman of the Joint Chiefs of Staff, appear to be more interested in progressive communist democrat woke policies than defending America from her enemies, both foreign and domestic.