Once again, the loathsome, despicable, liar, and leaker Representative Adam Schiff puts forth another one of his stunningly partisan bills. 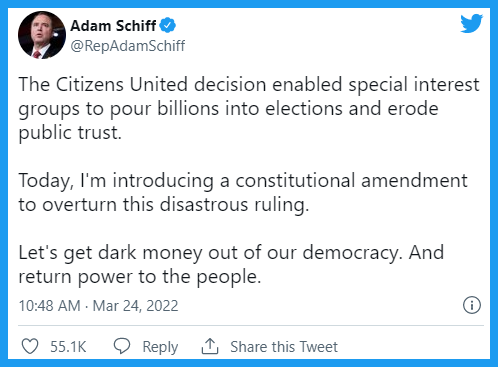 This time another attempt to overturn the effects of the Citizens United decision and to give politicians greater access to the public trough of taxpayer funds.

Citizens United v. Federal Election Commission, 558 U.S. 310 (2010), was a landmark decision of the Supreme Court of the United States concerning the relationship between campaign finance and free speech. It was argued in 2009 and decided in 2010. The court held that the free speech clause of the First Amendment prohibits the government from restricting independent expenditures for political campaigns by corporations, including nonprofit corporations, labor unions, and other associations.

Today, Congressman Adam Schiff (D-Calif.) introduced a constitutional amendment to overturn the Supreme Court’s Citizens United decision, and once again allow for reasonable restrictions on corporate campaign contributions and other spending.
In 2010, the Supreme Court ruled in Citizens United v. Federal Election Commission that corporations and special interest groups could spend nearly unlimited funds on election campaigns. In the decade since , outside groups spent more than $4.4 billion in federal elections – nearly $1 billion of which was untraceable “dark money” – with some of the biggest contributors coming from Wall Street, the pharmaceutical industry, and the NRA. <Source>

[OCS: Notice no mention of unions or dual-purpose tax-exempt “get out the Democrat vote” institutions?]

Like all legislation, the devil is in the details…

(1)  This is an unconstitutional amendment that limits unfettered free speech.

(2)  There is no definition of what might be construed as reasonable or viewpoint-neutral regarding free speech limitations.

(3)  There is no authority designed as an arbiter or enforcer of the legislation other than the politically-compromised judiciary, limiting judicial redress and remedy to the wealthy and well-connected.

(4)  There is no specific mention of the most significant contributor to public and political corruption – public and private unions with their vast sum of coerced donations and massive voting bloc.

(5)  As we have seen over the last decade, celebrities and wealthy individuals are now entering politics, some for the recognition, some for the access to funds that can be used to purchase cushy positions for those destined to lose their respective political races. Some vying for a chance at the golden ticket leading to future wealth, perpetual recognition, and perks and privileges only enjoyed by royalty, dictators, and billionaires. To allow these wannabes to use public campaign funds is to incentivize negative behaviors and results.

How do we know the legislation is corrupt?

Count the number of corrupt progressive communist democrats signing on to the bill.

Anything Adam Schiff touches is guaranteed to turn to Schiff for the American taxpayer/citizen.