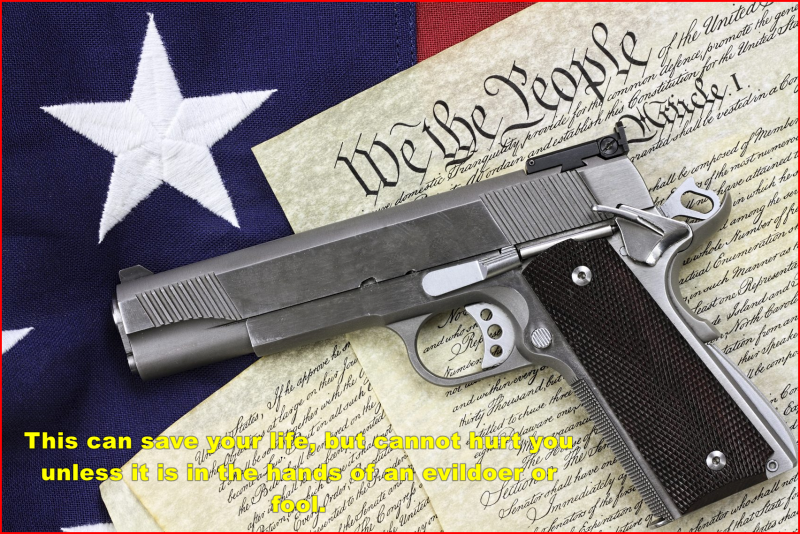 Let us consider some commonsense truths…

(1)   Guns, like power tools, are inanimate objects and, except for product defects, are subject to the will, intent, and motivation of the individual in control.

(2)   Society must be willing to accept and tolerate some degree of adverse gun-related activity as it is impossible to detect, prevent, or interdict the activities of criminals, crazies, terrorists, and those under the influence of chemical substances as these individuals have no respect for our laws and are unlikely to follow any law on the books. Suicides are almost impossible to prevent and should be a given in society. Likewise, accidents are random events due to carelessness and unforeseen circumstances.

(3)  The vast majority of individuals who have received gun familiarization and training and who own guns are likely to use firearms prudently as they are familiar with weapons.

(4)  To be effective, punishment must be widely known, certain, swift, equally administered, and proportionate to the crime.

(5)  When it comes to weapon usage, the greatest threats to society are attorneys and the politicization of gun-related investigations, prosecutions, and judgments. Forgiving gun use during criminal activities should not be subject to dismissal or plea bargains, especially to secure guaranteed arrests or convictions for those keeping score or those wishing to manipulate minority incarceration rates for political purposes. Soft-on-crime prosecutors, diversion programs, and the refusal to prosecute certain minorities contribute to the problem.

(6)   Strict and nonsensical gun laws impact the law-abiding citizens who are being denied their God-given right to self-defense against a more powerful aggressor when law enforcement authorities are unavailable. The old saying that you cannot outrun a bullet and that law enforcement has no legal duty or responsibility to protect or defend individuals other than protecting the regime and maintaining general order should inform legislative decisions.

(7)   Those who want to abolish or amend the Constitution’s Second Amendment do not fear hunters, target shooters, gun-collectors, criminals, crazies, or terrorists per se – they fear an armed rebellion that could result in regime change if the populace encounters a tyrannical regime. The ultimate check and balance to prevent a catastrophic dictatorship or incursion by a foreign sovereign power.

(8)   Although there are no restrictions regarding certain weapons in the Second Amendment, it would be reasonable to conclude that no individual should possess certain weapons like Gatling-style machine guns, grenades, rockets, guided missiles, or atomic weaponry. As for fully-automatic pistols and rifles, these should be strictly controlled. As for suppressors and other sound-deadening accessories, these can be grossly useful in preventing hearing loss. As for armor-piercing ammunition or incendiary ammunition and tracers, these too should be controlled. However, given the rise of personal body armor, one may need to rethink armor-piercing ammunition in the future.

(9)  The FBI’s crime statistics are often garbage as data collection is unreliable, and communities have been known to fudge results – especially when relying on conviction data rather than pre-plea bargain charging data. The political class refuses to allow illegal aliens to be correctly counted and categorized. The same goes for gun-related crime.

(10)  Do not release criminals who used guns into the community – no parole, no good-time credits, and sentences cannot be affected by judge-ordered prison population reductions.

The progressive communist democrats who rule the State do not want you to know the truth about politics and gun crime, especially as politicians pander to minorities with disproportionate criminal activity.

As the 2022 midterm elections approach, it is time for Californians to get gas prices, taxes, and crime under control.