THE GLOBALISTS ARE AGAINST U.S. ENERGY INDEPENDENCE 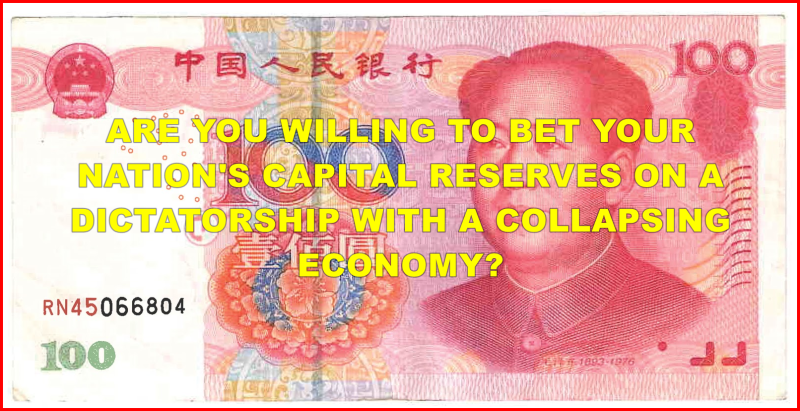 Once again, we find the progressive communist democrats and their RINO (Republicans In Name Only) cohorts fighting to destroy America’s energy dependence with a false argument.

They argue that America must keep purchasing foreign energy and keep pumping artificially-created dollars into the world’s energy market to preserve the dominance of the U.S. Dollar as the reserve currency of the world.

They point to the creation of the Communist China-created petroyuan as a boogieman. Claiming that China and Russia will cobble a coalition to trade oil in petroyuan rather than petrodollars, thus creating a new world reserve currency.

And the question they never seem to ask is which foreign oligarchs and elites would rather bank their personal funds in China or Russia, or, if given the opportunity, in the United States?

The petrodollar versus the petroyuan…

In 1944, forty-four allied nations executed the Bretton Woods Agreement to make the U.S. dollar the world’s official reserve currency. The entire global petroleum system is based on the United States dollar as the reserve currency used for international energy transactions.

Without these so-called petrodollars, central banks would not need to keep large amounts of American dollars, usually in the form of treasury securities, on hand to settle energy debts.

So the globalist narrative goes, without foreign sources to purchase U.S. treasury securities, the United States can no longer print worthless fiat currency, and our nation spins into a significant recession.

But is it true, or are we being whipsawed into supporting the national interests of other nations?

There is but one overriding goal for the Saudis: preserve the sovereignty of Saudi Arabia and the continuing rule of the Saudi Royal Family. Unfortunately, the Obama/Biden regime has proven, beyond a shadow of a doubt, that their word cannot be trusted and that longstanding agreements with allies and friends are subject to modification to meet the demand of domestic politics. So there should be little surprise that our friends and allies are now hedging their bets. Knowing they can no longer rely on America, they seek rapprochement -- reestablishing cordial relations with those nations whose national interests are diametrically opposite those of the United States.

Saudi Arabia is in active talks with Beijing to price some of its oil sales to China in yuan, people familiar with the matter said, a move that would dent the U.S. dollar’s dominance of the global petroleum market and mark another shift by the world’s top crude exporter toward Asia.

The talks with China over yuan-priced oil contracts have been off and on for six years but have accelerated this year as the Saudis have grown increasingly unhappy with decades-old U.S. security commitments to defend the kingdom, the people said.

The Saudis are angry over the U.S.’s lack of support for their intervention in the Yemen civil war, and over the Biden administration’s attempt to strike a deal with Iran over its nuclear program. Saudi officials have said they were shocked by the precipitous U.S. withdrawal from Afghanistan last year.

China buys more than 25% of the oil that Saudi Arabia exports. If priced in yuan, those sales would boost the standing of China’s currency. The Saudis are also considering including yuan-denominated futures contracts, known as the petroyuan, in the pricing model of Saudi Arabian Oil Co. , known as Aramco.  <Source: Wall Street Journal>

It appears that the Saudis are attempting to capitalize on the mental incapacity of President Biden and his corrupt, incompetent, and feckless administration led by America-hating Obama acolytes. They are delusional if they believe China or Russia will protect them from a nuclear Iran.

The dominance of the U.S. Dollar as the world’s reserve currency is based mainly on the size, strength, and stability of the U.S. economy and the dominant influence of U.S. financial markets. Despite our precarious fiscal condition, compromised by massive deficit spending, multi-trillions of dollars in national debt, and the seemingly endless printing of U.S. dollars, purchasing U.S. Treasury securities remain the safest way for foreign nations to store their capital reserves.

The U.S. Dollar, backed by the full faith and credit of the United States – the implicit trust and confidence that the United States can pay its debts -- will continue to make the U.S. dollar the most redeemable currency for transacting the world’s commerce.

Those who govern America must stand strong and avoid being whipsawed by our enemies into taking actions that benefit hostile foreign forces like Communist China and Russia. Both economic paper tigers shored up by bravado and nuclear weaponry.

We are so screwed when our leadership is braindead and acting against our nation in favor of our enemies. Will the pussies in the Biden Administration cave?

THE FACE OF OUR ENEMY MAY LOOK LIKE YOU!

She is young, adorable, has a beautiful smile, melodious voice, and has millions of fan- followers on social media. She may also have some expertise in an interesting subject or cultural matter.

Yet, this is the face of our enemy. A paid propagandist promoting a false and misleading narrative that slips under your self-protective radar because you are thinking about her smile.

In some cases, she may be a "useful idiot," a Cold War term used to describe an individual who is easy to persuade to do, say, or believe things that help our enemies. She may actually think she is being patriotic and helping our nation while helping to cause irreparable harm by conditioning the minds of those more interested in her physical attributes than arguments.

In other cases, she may be an uncaring merchandiser, more concerned with monetizing "her brand" to fund her personal lifestyle, better communications technology, or viewer reach.

And, there is the possibility that she finds the narrative authentic and compelling after decades of indoctrination by radical teachers, professors, and exposure to media propagandists who carefully avoided teaching about history, critical thinking, or the evils of communism.

In any event, she may be a clear and present danger to herself and America as she promotes a carefully-crafted narrative that benefits our enemies.

White House Press Secretary Jen Psaki and national security staffers met last week with 30 TikTok stars to discuss the war in Ukraine. Zeiler — an 18-year-old with 10.5 million followers — said that “she hopes to remain in communication with the White House and continue to press officials there about key issues,” The Washington Post reported. “I’m here to relay the information in a more digestible manner to my followers,” she said. “I would consider myself a White House correspondent for Gen Z.”

Over the weekend, Zeiler posted a TikTok explaining why gas prices and inflation rates are hitting record levels. <Source> 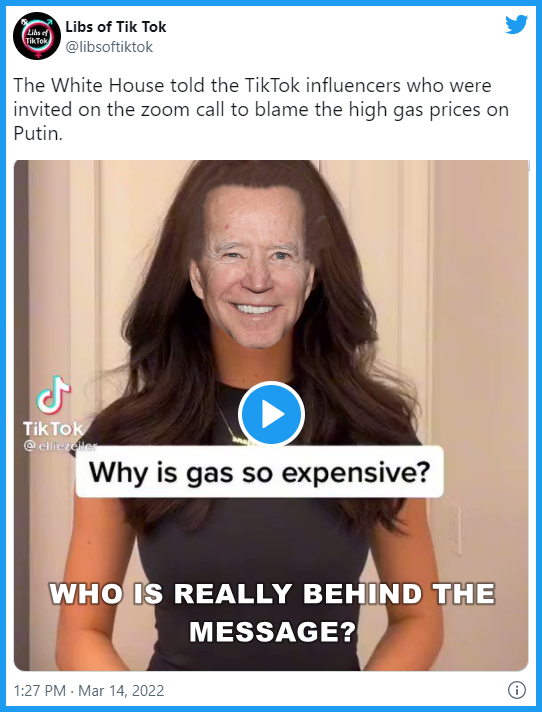 Fact check: Energy prices were rising before Putin threatened to invade Ukraine – not so coincidently when Joe Biden was inaugurated and immediately took action to restrict domestic energy production and to favor so-called green industry initiatives over fossil fuels. Oil prices in the global market are mostly based on supply and demand and the energy futures market and what energy hedgers, traders, and speculators believe the price will be at specific time periods in the future.

In California, the progressive communist democrats that rule California with an iron hand refuse to delay an additional tax on gasoline and diesel at the pump – anticipating a windfall of tax revenues based on higher pump prices.

We are being suckered by a devil with an evil heart hiding behind a beautiful façade.