ARE THE NEOCONS IN THE BIDEN ADMINISTRATION CONDITONING THE BATTLEFIELD FOR ESCALATION?

When you cannot trust the senior leadership of the United States government and the Department of State neocon apparatchiks who have a record of corruption and lying under oath when testifying before Congress, we are so screwed.

(1)  The United States used the pretext of “Weapons of Mass Destruction,” including chemical, biological, and radiological (nuclear) weapons, to preemptively invade Iraq in 2003, a foreign sovereign country. In retrospect, the claim was either not true or greatly exaggerated.

(2)  We now have the testimony of Under Secretary of State Victoria Nuland before the Senate Foreign Relations Committee that claims that there are biological research facilities in Ukraine are accurate and the United States is concerned about a Russian attempt to access these facilities.

(3)  Does this revelation provide the same type of moral justification for the Russian invasion of Ukraine with the same comprehensive and devastating results we saw in Iraq?

(4)  Does this revelation provide the same type of moral justification for the Americans to mount an effort to secure these facilities and risk a severe escalation of the conflict? Especially after experiencing the effects of a global pandemic allegedly released from a  similar biological research facility in Communist China.

(6)  Does this incursion and threat demand that our Southern Border be secured now?

(7)  Where is the United Nations considering that it appears an aggressor nation is perpetrating war crimes against innocent civilians? How does one handle the influence of Russia and China in the United Nations?

What you are not seeing in the mainstream media...

A deleted web article recovered by The National Pulse reveals that former President Barack Obama spearheaded an agreement leading to the construction of Biolabs handling “especially dangerous pathogens” in Ukraine.

The news comes on the same day that Biden regime apparatchik Victoria Nuland told the U.S. Senate that the American government is concerned about biological research facilities falling into Russian hands as a result of the ongoing conflict in Eastern Europe.

Originally posted on June 18th, 2010, the article “Biolab Opens in Ukraine” details how Obama while serving as an Illinois Senator, helped negotiate a deal to build a level-3 biosafety lab in the Ukrainian city of Odessa.

The article, which also highlighted the work of former Senator Dick Lugar, was additionally included in Issue No. 818 of the United States Air Force (USAF) Counterproliferation Center’s Outreach Journal.

“Lugar said plans for the facility began in 2005 when he and then-Senator Barack Obama entered a partnership with Ukrainian officials. Lugar and Obama also helped coordinate efforts between the U.S and Ukrainian researchers that year in an effort to study and help prevent avian flu,” explained author Tina Redlup.

A 2011 report from the U.S. National Academy of Sciences’ Committee on Anticipating Biosecurity Challenges of the Global Expansion of High-Containment Biological Laboratories explained how the Odessa-based laboratory “is responsible for the identification of especially dangerous biological pathogens.”

“This laboratory was reconstructed and technically updated up to the BSL-3 level through a cooperative agreement between the United States Department of Defense and the Ministry of Health of Ukraine that started in 2005. The collaboration focuses on preventing the spread of technologies, pathogens, and knowledge that can be used in the development of biological weapons,” the report continues.

“The updated laboratory serves as Interim Central Reference Laboratory with a depozitarium (pathogen collection). According to Ukrainian regulations, it has a permit to work with both bacteria and viruses of the first and second pathogenic groups,” explains the report.

A separate document detailing Ukraine’s biolab network from the BioWeapons Prevention Project outlines in greater detail the scope of pathogens the facility has conducted research with.

Among the viruses the lab studied were Ebola and “viruses of pathogencity group II by using of virology, molecular, serologica and express methods.”

Is it not likely that the Ukraine lab would follow the research and techniques developed in the Communist Chinese Wuhan lab? And, what to make of those who claimed that the existence of biowarfare labs in Ukraine was a “conspiracy theory?”

Notice that the Chinese are now condemning U.S.-funded biological labs as their Wuhan lab’s moral equivalent.

The three top leaders of the U.S. government, President Joe Biden, Vice President Kamala Harris, and House Speaker Nancy Pelosi, are manifestly unfit to lead the United States in a time of serious conflict. Due to the actions of former President Obama, our military has been severely degraded, and our military’s leadership decimated. The degradation of our military has continued under the Biden Administration.

We have seen the global effects of a biological agent released by an enemy nation. We are in a time of unprecedented peril in modern history, with Russia subtly threatening the use of nuclear weapons should outside entities interfere in its conquest of Ukraine.

And, there is but one action for the American citizen to consider. Hold the Democrat Party responsible for what has happened to our nation since the election of President Obama -- and the American media as co-conspirators in his effort to fundamentally transform the United States.

To say we are screwed is an understatement.

WHAT GOOD IS THE UNITED NATIONS? 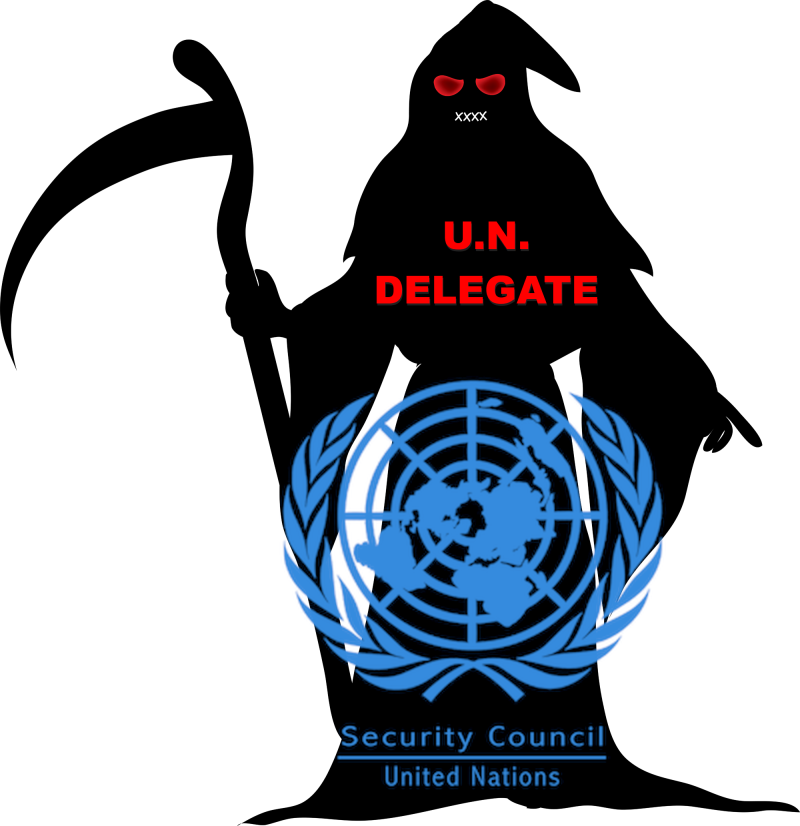 It is now time to defund the United Nations and kick their sorry collective asses out of New York.

ALL YOU HAVE TO KNOW: NANCY PELOSI ENDORSES RACIST, CASTRO-LOVING BLACK COMMUNIST FOR L.A. CITY MAYOR 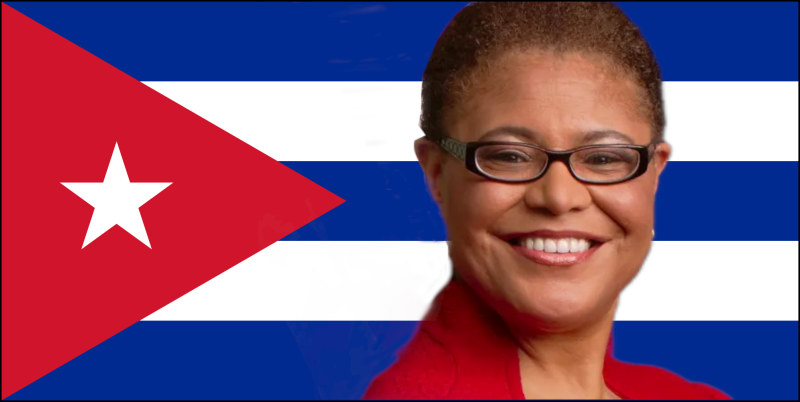 “N’COBRA’s [2019] Convention was largely aided by the Nation of Islam. The NOI provided press, promotional and technical assistance before and during the convention and live streamed most of the activities,” black weekly newspaper The Chicago Crusader reported at the time.

Bass, who chairs the Congressional Black Caucus, is a co-sponsor of HR 40, a reparations bill for the descendants of American slaves. N’COBRA has dedicated itself to passing a reparations bill since its creation in 1987. “The 1989 issuance of HR 40 continues to be a prophetic pronouncement of what the United States of America must do to address its Achilles heel of systemic racism that continues to haunt and undermine the nation’s entire psycho-social, political, religious and economic fabric and future,” a N’COBRA “primer” on the history of the proposed legislation states.

N’COBRA is a black nationalist organization that believes the continuing fallout from slavery is the source of all problems plaguing the black community today. Even news that black Americans are reportedly more prone to be affected by the Coronavirus is attributed to genetic corrosion caused by slavery. “Due to the transgenerational epigenetic injury-the forced removal from Africa, a slave diet that consisted largely of cornmeal and fat, and 500 years of terror-Black people are highly susceptible to develop, at some point in their lifetimes, major diseases and life challenging illnesses than other ethnic groups in America,” the group states on its website. <Source>

Rep. Karen Bass (D-Calif.) is reputed to be among former vice president Joe Biden’s final choices to become his running mate. Her apparent lifelong fascination with Cuba’s Communist dictatorship should disqualify her from that honor.

In her youth, Bass was involved with a group called the Venceremos Brigade. The group, which still operates, has for decades brought American leftists to Cuba to visit and work on projects sponsored by the totalitarian government. The exact extent of her involvement is disputed: A communist newspaper from 1975 suggests she was a leader and organizer in her native Southern California while Bass herself has played down any leadership role but acknowledged multiple visits to Cuba with the Brigade to “build houses." Regardless, it’s clear that Bass was involved with an enterprise that had a goal of encouraging the health and survival of a despotic, evil regime.

It strains credulity to believe Bass didn’t know what she signed up for. “Venceremos” means “we shall triumph” in Spanish and has been a frequent word used by Communists in the Spanish world to describe their struggle. At a time when the United States actively opposed and embargoed the Communist island, it was clear to anyone with eyes whom the struggle was against and whose defeat such “triumph” would entail. Cuban dictator Fidel Castro frequently used the word in describing his purported struggle. He ended his speeches with “Patria o muerte! Venceremos!” (“Fatherland or death! We shall triumph!”) in an attempt to draw Cubans to back “the Revolution.” Even today, the Brigade extols the idea of “showing solidarity with the Cuban Revolution.”

Nor, it seems, has she completely lost the revolutionary ardor of her youth. When Castro died in 2016, she offered her condolences: “The passing of the Comandante en Jefe is a great loss to the people of Cuba” she said, using the Spanish term of endearment that Communists have long used for him.<Source>

It is time to stop the racists and communists from infiltrating every level of government: local, state, and federal.