WHICH JUDGE WILL BECOME THE SAVIOR OR A MAJOR THREAT TO DEOCRACY? 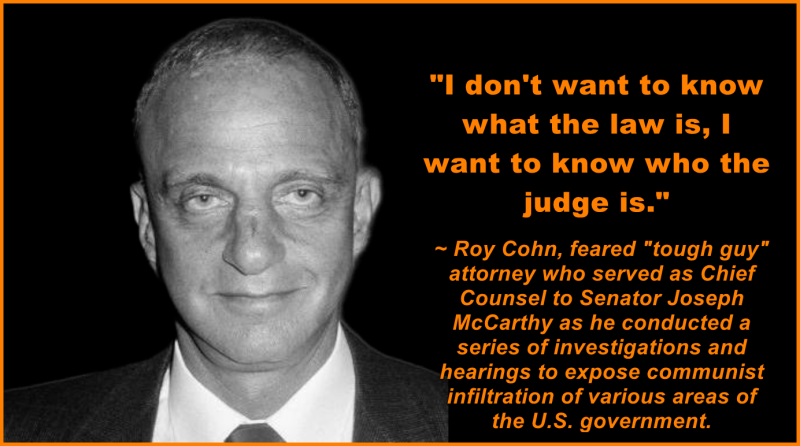 As we have seen over the past years, the most meticulously prepared documentary evidence and sworn testimony mean little when presented to a partisan judge projecting his political ideology…

One need only consider the case against former senior FBI lawyer Kevin Clinesmith who forged an exculpatory email from the CIA noting that Carter Page was WAS affiliated with the CIA when dealing with Russian nationals.

Based on the forgery that claimed Page WAS NOT a CIA asset, the government sought a renewal of a FISA (Foreign Intelligence Surveillance Act) domestic spying warrant that became another pretext used to further spy on Trump associates.

Even though Clinesmith pled guilty to "one count of making a false statement within both the jurisdiction of the executive branch and judicial branch of the U.S. government, an offense that carries a maximum term of imprisonment of five years and a fine of up to $250,000," and was responsible for bankrupting Carter Page and destroying his reputation, U.S. District Judge James Boasberg, apparently ignored the grave assault on our democratic system, a fraud on the Court, and the damage done to Page when he sentenced Clinesmith to serve 12 months probation and 400 hours of community service.

He is the only defendant charged in the Durham investigation, which has looked closely at the FBI's work on the early Russia investigation, including Page's ties to Russia and others with ties to the Trump 2016 campaign.

Clinesmith was sentenced to serve 12 months probation and 400 hours of community service. He pleaded guilty last year to falsifying information in an email that wrongly said Page had not been a CIA source previously, as the FBI sought to renew a foreign surveillance warrant for Page in 2017.

"Anybody who's watched what Mr. Clinesmith has suffered is not someone who would readily act in that fashion," Judge James Boasberg of the US District Court in DC said, somewhat rejecting the Justice Department's argument that Clinesmith receiving a harsh sentence would help deter others from crime and that he was akin to Mueller investigation defendants who lied and went to prison.

Boasberg, who is also the Foreign Intelligence Surveillance Court's presiding judge, notably said he believes the warrant still may have been signed for surveillance of Page, who in 2017 was a former Trump foreign policy adviser who was under investigation because of his ties to Russians.

"Even if Mr. Clinesmith had been accurate about Dr. Page's relationship with the other government agency, the warrant may well have been signed and the surveillance authorized," Boasberg said, though he also noted other mistakes in the Page foreign intelligence surveillance applications.

Clinesmith obtained no real personal benefit from his actions and had no active intent to harm, the judge also noted.

"My view of the evidence is that Mr. Clinesmith likely believed that what he said about Dr. Page was true," Boasberg said.

"He was saving himself some work taking an inappropriate shortcut," but didn't intend to give wrong information about Page, the judge added.

Boasberg also noted how the Justice Department inspector general found Clinesmith wasn't acting with political bias -- a point the Trump administration tried to make repeatedly to undermine the Mueller investigation that grew out of the FBI's work on Russia in 2016 and 2017. <Source>

Clinesmith was definitely a partisan, as noted by instant messages listed in the report on the FBI by Justice Department Inspector General Michael Horowitz…

“I am numb. I am so stressed about what I could have done differently.”

“I just can’t imagine the systematic disassembly of the progress we made over the last 8 years.”

“We have to fight this again,” “Viva le resistance [sic].”

Even more egregious than the Judge appearing to act as a special pleader for Clinesmith during sentencing is that Judge Boasberg, also the Presiding Judge of the Foreign Intelligence Surveillance Court, did not undertake evidentiary hearings or seek sanctions for an obvious fraud on the court by the Department of Justice and Federal Bureau of Investigation officials who knowingly filed unsubstantiated documents and made false representations to the Court under oath.

Some suggest that Clinesmith earned his lenient sentence by cooperating with prosecutors -- ludicrous as Clinesmith appeared to lack the type of access required to roll over on top officials.

With the mainstream media and social media platforms censoring and canceling dissenters and suppressing accurate information, in effect acting as regime propagandists, it all comes down to the prosecution to tell the story to the American public and the judiciary to decide whether we continue to have a republic.

Already evidence exists of a two-tier justice system with some individuals “too big to jail.” We have seen several partisan judges, even on the Supreme Court bench, pushing their partisan agenda even when the Constitution and case law are clearly stated.

To say we are on the precipice and screwed is an understatement. We can only pray that justice will prevail and our republic endures.