Over decades we have observed the behavior of Hillary Clinton and the ease at which she seems to deflect the long list of scandals that swirl about her and her associates when in positions of political power.

Hillary never admits wrongdoing or if she “appears" to take responsibility for something, she has a ready finger to point to someone else.

It is never about the truth, unless it supports the narrative she is advancing. Hillary is known to be a congenital liar who is capable to controlling her emotions and demeanor for maximum effect and impact.She is appears to be beyond shame and will continue to lie even when confronted with recorded evidence of the facts. Nothing interferes with her agenda and prevailing narrative.

The most common Hillary distraction tactic is projection, ascribing her behavior to those who oppose her. Often with the use of pejorative labels like "the vast right-wing conspiracy."

Notice that Hillary Clinton almost always employs attorneys in critical positions so that she can capitalize on claiming attorney-client privilege for conversations and documents.

One of Hillary’s best tactics is to simply delay any proceedings beyond the Statute of Limitations. You will notice that whenever confronted about a past scandal, Hillary will claim that the matter has been sufficiently and satisfactorily covered in previous proceedings or the media and is therefore “old news” and not worthy of further discussion.

Statute of Limitations for 18 USC § 1001, False Statements to the U.S. Government

Statute of Limitations for Conspiracies and Continuing Offenses

Statutes of limitation “normally begin to run when the crime is complete,” which occurs when the last element of the crime has been satisfied.

The rule for conspiracy is a bit different.  The general conspiracy statute consists of two elements: (1) an agreement to commit a federal crime or to defraud the United States and (2) an overt act committed in furtherance of the agreement.  Conspirators left uninterrupted will frequently continue on through several overt acts to the ultimate commission of the underlying substantive offenses which are the objectives of their plots. Thus, the statute of limitations for such conspiracies begins to run not with the first overt act committed in furtherance of the conspiracy but with the last.

The statute of limitations under conspiracy statutes that have no overt act requirement begins to run with the accomplishment of the conspiracy’s objectives, with its abandonment,  or with the defendant’s effective withdrawal from the conspiracy.

Concealment of the criminal plot after its completion is considered a natural component of all conspiracies. Consequently, overt acts of concealment after the objectives of the conspiracy have been accomplished may not be used to delay the running of the statute of limitations.  Overt acts of concealment which are among the original objectives of the conspiracy as charged in the indictment, however, may serve as the point at which the statute of limitations begins to run.97 Distinguishing between the two is sometimes difficult.

There are other crimes, which, like conspiracy, continue on long after all the elements necessary for their prosecution fall into place. The applicable statute of limitations for these continuing crimes is delayed if either “the explicit language of the substantive criminal statute compels such a conclusion, or the nature of the crime involved is such that Congress must assuredly have intended that it be treated as a continuing one.”

Statute of Limitations for Perjury Laws

Perjury is covered under 18 U.S.C. Section 1621: Perjury Generally. This states that anyone who has taken an oath in a situation in which oaths can be administered, shall tell the truth, the whole truth, and nothing but the truth. If they willfully do otherwise, making declarations that they do not believe to be true, they will have committed perjury.

The statute of limitations for perjury under federal law is five years.

To say Hillary Clinton is vindictive and has a long memory of real or imagined slights is to understate the situation by several orders of magnitude. While she can be extremely generous when it suits her purpose, she is also capable of destroying anyone or anything that stands in her way – no matter how innocent the individual or how true the facts may be.

One of the primary reasons Hillary Clinton continues to function and has never been held accountable for her actions is that she is surrounded by a dedicated cult-like coterie of acolytes who form her inner circle. A very select group of individuals who associate with one another frequently and are committed to protecting Hillary Clinton, and by extension themselves, from ever being held accountable. Most often mentioned are: media specialist Mandy Grunwald, attorney Cheryl Mills, former Chief of Staff Maggie Williams, policy wonk Neera Tanden, political operative John Podesta,  and “aide” Huma Abedin.

Along with “Team Clinton,” we find a complicit and corporatized mainstream media willing to censor or outright lie to advance a progressive communist democrat agenda. Over the past years, we have seen mainstream media cite anonymous high-level sources said to “have direct knowledge of the situation.” We often find the information was provided by liars and/or leakers with little rank, access, or knowledge -- individuals who are rarely held accountable for their lies even when they cause significant damage. 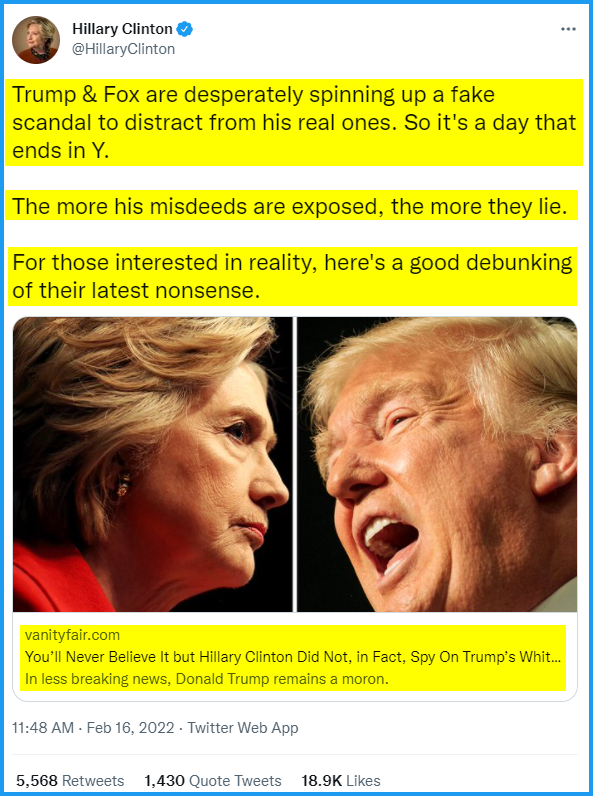 We know the scandal is real, not fake, from sworn testimony, documentary evidence, and court proceedings. Hillary's attempts to ascribe her behavior to Trump and Fox News is ludicrous. A classic case of lying and projection.

Donald Trump’s only crime in the eyes of the Hillary Team is that he stood in the way of the Presidency Hillary coveted. It is unlikely that Obama, Clinton, and Biden will ever be held accountable in a court of law, unlike being judged guilty in the court of public opinion.

The best “We the People” can expect is a full and complete report on the nefarious activities of the Obama and Biden Administrations. 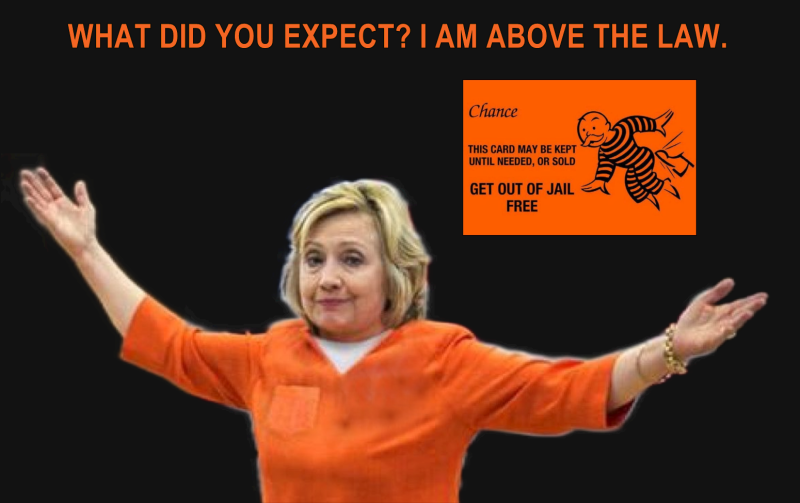 For those wishing to see political spin at its finest, you may want to read Vanity Fair’s bullpucky, “You’ll Never Believe It But Hillary Clinton Did Not, In Fact, Spy On Trump’s White House.”