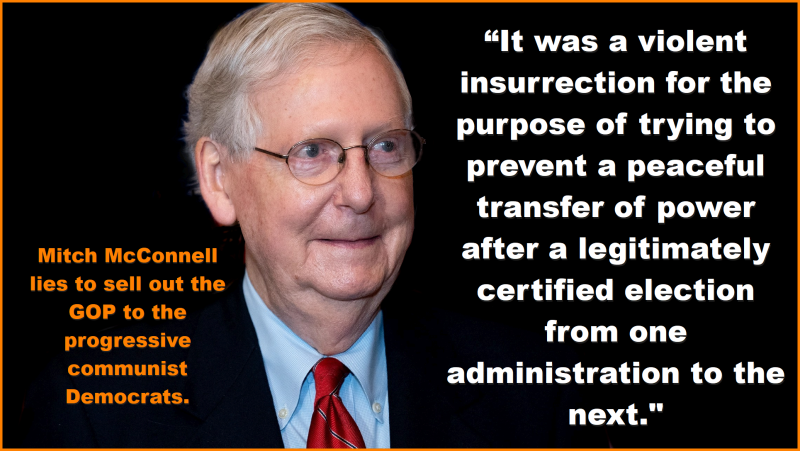 “It was a violent insurrection with a purpose of trying to prevent peaceful transfer of power after a legitimately certified election from one administration to the next. That's what it was."

McConnell's position that the GOP should "support all members of our party, regardless of their positions on some issues" is precisely what's wrong with a GOP that no longer affirms constitutional core values and holds that dissenting members should not be held accountable for siding with the opposition in critical votes  A form of moral equivalency that allows evil to advance in our nation.

McConnell, who represents the establishment Republicans, continues to crap on constitutional conservatives and others who want to check the increasing power of the progressive communist Democrats as they attempt to turn a thin minority into a perpetual one-party rule, even if they destroy the Constitution and the America we love in the process.

I can only wonder if McConnell is being held hostage by the Communist Chinese as a significant part of his wife's family fortune is rooted in Communist China? Or is he simply a corrupt, self-serving piece of shit?

We are so screwed if we do not change the GOP leadership. Senators John Cornyn (R-TX),  John Barrasso (R-WY), John Thune (R-SD) are not much better. It's time to clean house.

When will the Department of Homeland Security Declare Democrats as the Real Threat to America?

There is little or no doubt in my mind that the Department of Homeland Security is too big, too unwieldy, and too incompetent to execute its assigned mission and would serve the public better if it was reorganized into separate organizations under a distributed leadership model.

Likewise, I believe that the Secretary of Homeland Security Alejandro N. Mayorkas should be tried, convicted, and impeached for high crimes and misdemeanors for ignoring federal immigration laws and permitting the invasion of the United States by illegal aliens, many of them criminals, disease carriers, or foreign nationals that do not wish America well.

Therefore, it comes as no surprise that a highly-partisan Secretary Mayorkas would issue a National Terrorism Advisory System Bulletin that provides further justification for the denial of free speech in America under the guise of a non-specific terrorist threat.

Secretary of Homeland Security Alejandro N. Mayorkas issued a National Terrorism Advisory System (NTAS) Bulletin regarding the continued heightened threat environment across the United States. This is the fifth NTAS Bulletin issued by the Department of Homeland Security since January 2021 and it replaces the current Bulletin that was set to expire tomorrow.

“DHS remains committed to proactively sharing timely information and intelligence about the evolving threat environment with the American public,” said Secretary Alejandro N. Mayorkas. “We also remain committed to working with our partners across every level of government and in the private sector to prevent all forms of terrorism and targeted violence, and to support law enforcement efforts to keep our communities safe. This NTAS Bulletin outlines the key factors that have increased the volatility, unpredictability, and complexity of the current threat environment, and highlights resources for individuals and communities to stay safe.”

[OCS: To avoid Constitutional issues with the suppression of First Amendment speech rights, it appears that the government has implicitly or explicitly coerced private organizations to censor or cancel the speech of private individuals and organizations whose recitals of fact or opinions run contrary to the progressive communist narrative being created and promoted by the current regime.

How many times have we seen individuals labeled as conspiracy theorists only to find out not only what they were saying was not only correct, but far worse than imagined?

How many times has the regime promoted false information which they rarely correct with the same vigor the used in the promotion.

If wrong information were the issue, why has former why was Donald Trump canceled off social media platforms yet Joe Biden, a mentally-impaired congenital liar, remains active on these  same platforms? The same could be said of White House Press Secretary Jen Psaki and numerous other liars and leakers in the administration.]

The United States remains in a heightened threat environment fueled by several factors, including an online environment filled with false or misleading narratives and conspiracy theories, and other forms of mis- dis- and mal-information (MDM) introduced and/or amplified by foreign and domestic threat actors. These threat actors seek to exacerbate societal friction to sow discord and undermine public trust in government institutions to encourage unrest, which could potentially inspire acts of violence. Mass casualty attacks and other acts of targeted violence conducted by lone offenders and small groups acting in furtherance of ideological beliefs and/or personal grievances pose an ongoing threat to the nation.

[OCS: This is bullpucky!  The greatest proliferation of bad information is being introduced by the progressive communist democrats and amplified by the progressive propagandists in the mainstream media and on social media platforms.Without dissent, knowledge stagnates and does not advance for the benefit of society.

The key to robust progress is a vigorous competition between competing ideas – not an echo chamber fueled by progressive propaganda.]

While the conditions underlying the heightened threat landscape have not significantly changed over the last year, the convergence of the following factors has increased the volatility, unpredictability, and complexity of the threat environment: (1) the proliferation of false or misleading narratives, which sow discord or undermine public trust in U.S. government institutions; (2) continued calls for violence directed at U.S. critical infrastructure; soft targets and mass gatherings; faith-based institutions, such as churches, synagogues, and mosques; institutions of higher education; racial and religious minorities; government facilities and personnel, including law enforcement and the military; the media; and perceived ideological opponents; and (3) calls by foreign terrorist organizations for attacks on the United States based on recent events.

[OCS: Items one and two point directly at the Democrat Party and their shock troops – Antifa and Black Lives Matter. Add Islamic and Democrat anti-Semitism (including Democrats in Congress) and you have a domestic threat profile that exceed the foreign threat profile at this particular time.] 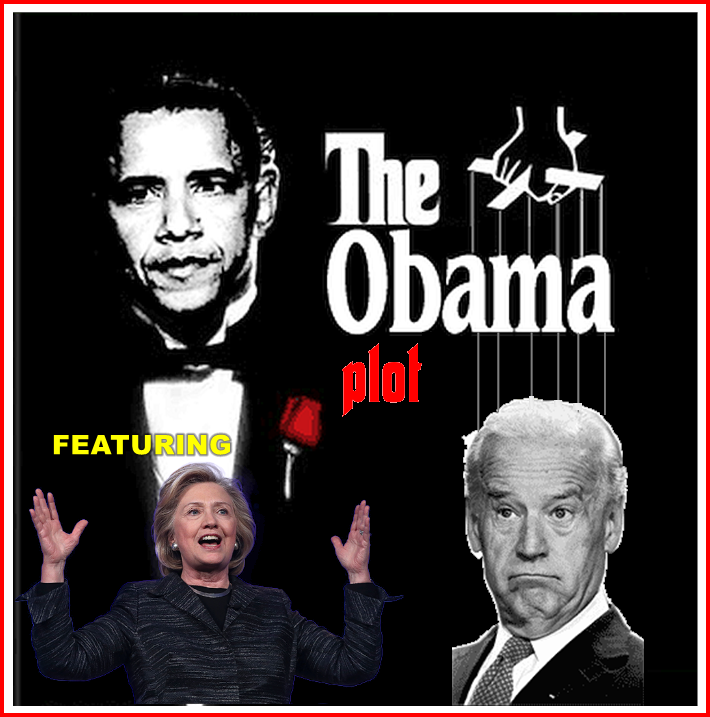 There is no doubt in my mind that the greatest threat to America is the progressive communist democrats introduced by the Obama Administration and who weaponized most of our government institutions. Just consider the number of adverse events that occurred on the Democrat's watch. Jimmy Carter, the father of Islamo-Fascism. Bill Clinton selling America to the Communist Chinese and nuclearizing North Korea. Obama and Clinton sold out to our enemies, nuclearized Iran, ignored the proliferation of nuclear technology of an Islamic Pakistan, and refused to acknowledge their creation of the Taliban.

Democrats are responsible for most of America’s problems, and a weak GOP did nothing while pocketing their share of the proceeds.