BIDEN EMPLOYMENT NUMBERS -- WHAT THE PROGRESSIVE PROPAGANDISTS LEFT OUT

(2)  Bury the changes in the boring footnotes.

Private sector employment decreased by 301,000 jobs from December to January according to the January ADP® National Employment Report.  Broadly distributed to the public each month, free of charge, the ADP National Employment Report is produced by the ADP Research Institute® in collaboration with Moody's Analytics. The report, which is derived from ADP's actual data of those who are on a company's payroll, measures the change in total nonfarm private employment each month on a seasonally-adjusted basis.   <Source>

What the progressives reported as headline news…

America's jobs recovery got an unexpected boost in January despite the Omicron variant spreading rapidly throughout the country.

The economy added 467,000 jobs last month, the Bureau of Labor Statistics said Friday, significantly better than most economists had expected. Restaurants and bars added more than 100,000 jobs. Positions in retail, logistics and business services jobs also increased. This was a shock, as the consensus forecast had been for only 150,000 jobs. Plenty of experts even expected job losses. So once again, economists got it totally wrong. It's a reminder that there are a lot of moving parts in the pandemic economy, making it hard for economic models to keep up with a situation that's so in flux. <Source>

What they didn’t report…

Changes to The Employment Situation Data

Establishment survey data have been revised as a result of the annual benchmarking process and the updating of seasonal adjustment factors. Also, household survey data for January 2022 reflect updated population estimates.

See the notes at the end of this news release for more information. <Source>

The Wages of Inflation

Average hourly earnings are up 5.7% in a year, and they’re rising fast.

Who knows what to make of Friday’s report on January jobs? The employer survey showed a blowout of 467,000 net new jobs for the month, but the numbers were skewed by major Labor Department revisions for the U.S. population and civilian employment. Without those changes, the jobs number would have declined. Add the complexities of adjusting for winter weather and Covid’s Omicron variant, and no one should make too much of this one monthly report. <Source>

ANOTHER COMMUNIST ATTACK ON OUR COUNTRY AND ITS ECONOMY?

Like most people who enjoy the benefits of nature, I believe we have a solemn duty to be good stewards of our domain.

However, this does not mean impeding progress, ignoring beneficial resources that can be used for the greater good, and weaponizing environmentalism as a political tool to damage our country and our communities.

The thought that we would divert billions of gallons of usable water from use in our communities to alleviate droughts and support critical agriculture to the ocean to possibly save a garbage fish with no known relevance other than its very existence is abhorrent. When such actions are taken to politically attack the critical infrastructure of America, it is tantamount to fighting an undeclared war. Likewise, considering dried-up riverbeds and ponds to be “navigable waters” should be regarded as a political power grab by an agency known to be infiltrated with individuals who want to destroy or damage America from within.

(1)  The environmental movement has been deeply infiltrated by communists who find that environmentalism trumps socialism in fundraising, community organizing, and using the state’s own power against itself.

(2)  Communists derive much of their power from pre-arranged court settlements between the communist environmentalists and the communist or communist sympathizers who have infiltrated our government or who have been seduced into this toxic movement.

The federal government seems to have quite a few tricks up their sleeve when it comes to spending and regulation.  ‘Sue and settle’ is the latest tactic used by the federal government and environmental groups to increase the federal government’s regulatory power over the private sector. The way this tactic is employed is when a federal agency, like the Environmental Protection Agency (EPA), and a like-minded group, like the Sierra Club, coordinate a lawsuit between each other where there is no aggrieved party. The court then quickly adopts a pre-arranged settlement. Not only does this undermine the adversarial litigation process, the settlements pave the way for new regulations that are favored by the environmental groups and the EPA. The deadline to execute the settlement is intentionally short term, which leaves those affected by the new regulation with little opportunity to react. The EPA then implements the new regulation on a rapid timetable and, if questioned, the agency defends its actions as “court-ordered.” <Source>

Then use these rules and regulations to attack…

ALINSKY’S RULES FOR RADICALS: RULE 4: “Make the enemy live up to its own book of rules.”

If the rule is that every letter gets a reply, send 30,000 letters. You can kill them with this because no one can possibly obey all of their own rules. (This is a serious rule. The besieged entity’s very credibility and reputation is at stake, because if activists catch it lying or not living up to its commitments, they can continue to chip away at the damage.)

(3)  A weed is a plant considered undesirable in a particular situation, “a plant in the wrong place.” Taxonomically, the term "weed" has no botanical significance because a plant that is a weed in one context is not a weed when growing in a situation where it is wanted. <Source> 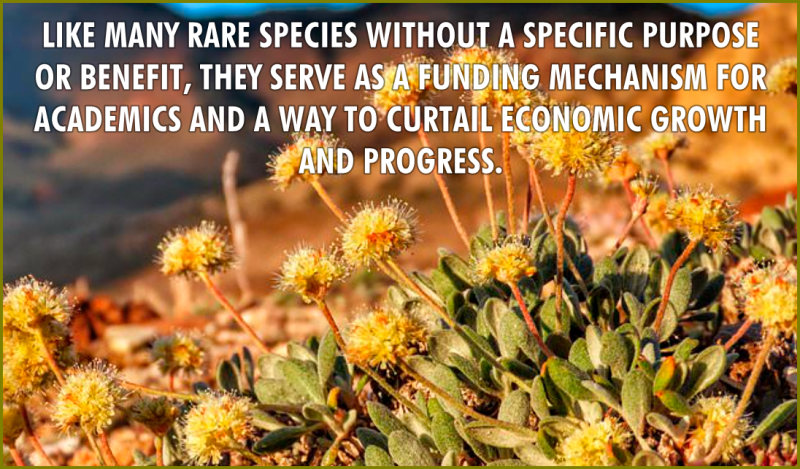 US backs rare flower habitat amid Nevada lithium mine fight

The U.S. Fish and Wildlife Service has proposed designating critical habitat for a Nevada wildflower it plans to list as endangered amid a conflict over a mine to produce lithium batteries for electric vehicles critical to the Biden administration's plans to combat climate change.

The agency on Wednesday proposed designating critical habitat for Tiehm's buckwheat on a high-desert ridge near the California line halfway between Reno and Las Vegas.

It's the only place in the world the delicate, 6-inch-tall (15-centimeter) wildflower with yellow blooms is known to exist.

It's also the site where Ioneer USA Corp. plans to build a big lithium mine. Ioneer said the proposed designation was "an anticipated development" that "has no material impacts on our planned mining activities."

Unless the Fish and Wildlife Service reverses course because of new information, the plant will be declared endangered in September based on a court order and the agency's final listing rule in October 2021 that concluded that the wildflower may already be on the brink of extinction.

That listing triggers certain regulatory obligations, such as consulting with the service before any development or other activity that could harm the plant.

It is about time we start weeding out communists from our government. Even though Senator Joseph McCarthy may have been a reprehensible individual, he was absolutely right that our government was infiltrated by communists acting in the best interests of a foreign hostile power. Today, we can only guess at the degree of infiltration of our politicians, bureaucracy, institutions, and critical infrastructure.

The place to start is by reducing the corruption in politics and the amount of waste, fraud, and abuse that is a mechanism to filter taxpayer funds to the special interests.