Once again, blaming the GOP for the actions they have taken or are taking… 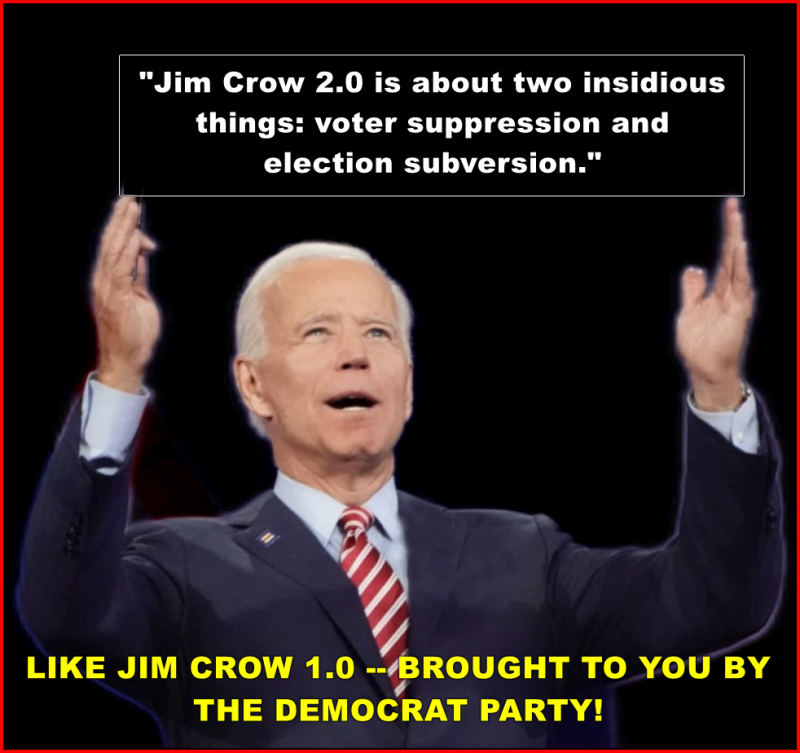 From Biden's speech in Atlanta, Georgia, where massive election irregularities have been uncovered.

And Joe Biden should know because he hung with the segregationists and members of the Ku Klux Klan when he first came to Congress.

Disparate impact is a tool used by social justice warriors to “prove” that systemic racism exists without “proof” or “intent.”

Basically, disparate impact is a statistical lie used to prove that discrimination has occurred in a protected class because the percentage of class members affected greatly exceeds their class representation in the general population. It is statistically invalid because the process ignores “confounding variables,” which are unmeasured variables that impact both the cause and effect of the variable being measured – and can cause invalid results. 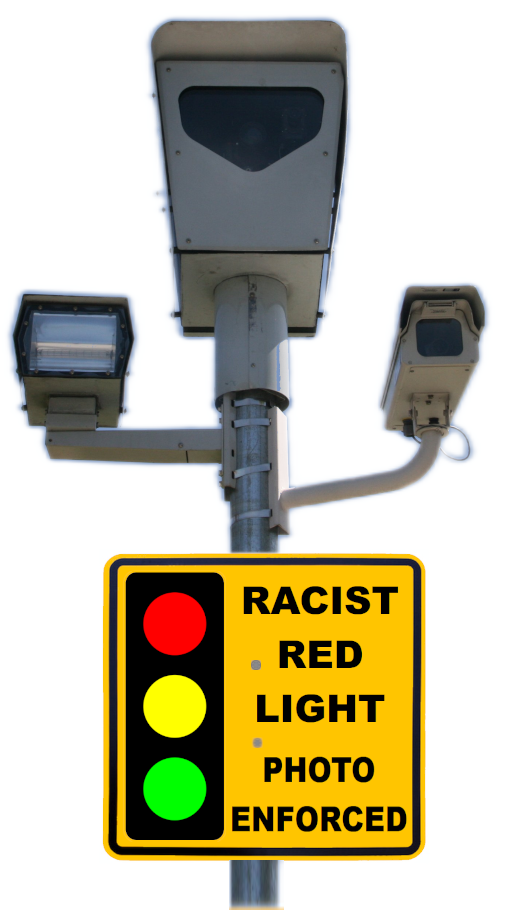 When then-Mayor Richard M. Daley ushered in Chicago’s red-light cameras nearly two decades ago, he said they would help the city curb dangerous driving. “This is all about safety, safety of pedestrians, safety of other drivers, passengers, everyone,” he said.

[OCS: Of course, this is one of those big government lies. When municipalities saw that red light cameras were cash cows, they ignored credible studies showing that the cameras were marginally effective in reducing accidents and could be the proximate cause of rear-end collisions as drivers jam on their brakes at the last second to avoid a red light camera ticket.]

But for all of their safety benefits, the hundreds of cameras that dot the city — and generate tens of millions of dollars a year for City Hall — have come at a steep cost for motorists from the city’s Black and Latino neighborhoods. A ProPublica analysis of millions of citations found that households in majority Black and Hispanic ZIP codes received tickets at around twice the rate of those in white areas between 2015 and 2019.

The consequences have been especially punishing in Black neighborhoods, which have been hit with more than half a billion dollars in penalties over the last 15 years, contributing to thousands of vehicle impoundments, driver’s license suspensions and bankruptcies, according to ProPublica’s analysis.

[OCS: If the city is truly placing cameras at dangerous points, where is the analysis showing that the minority community is generating traffic infractions at a rate that is above the general population and deserving of extra enforcement? One might also make this case for murder and other serious crime in Chicago and similar inner cities.]

“We felt the brunt of it the way white people didn’t,” said Olatunji Oboi Reed, a longtime activist for racial equity in transportation in Chicago who has received a handful of camera tickets over the years. “Fortunately, I’ve always been in a situation where I can survive financially, unlike many Black and brown people in the city; one ticket is throwing their whole finances in a hurricane.”

[OCS: Many municipalities have removed certain red light cameras, primarily because the revenue generated does not exceed their cost of operation or they have been ruled ineffective by the legislature – not because of any racial or socio-economic impacts.]

Similar racial and income disparities in camera ticketing have been documented elsewhere. In Rochester, New York, officials eliminated the city’s red-light camera program in 2016 in part because motorists from low-income neighborhoods received the most tickets and the financial harm outweighed any safety benefits. Miami ended its program in 2017 amid complaints from low-income residents who felt unfairly burdened by the fines. And in Washington, D.C., racial justice advocates are researching the city’s camera-ticketing program after a local think tank in 2018 and The Washington Post last year found that cameras in Black neighborhoods issued a disproportionate share of tickets there.

In Chicago, officials have known of disparities since at least April 2020, when a pair of professors at the University of Illinois Chicago shared initial research showing that cameras send the most tickets to predominantly Black ZIP codes. The city then hired them to study the issue further.

Six months later, Lightfoot — who campaigned in part on ending what she called the city’s “addiction” to fines and fees — proposed that Chicago expand camera ticketing by lowering the speeds at which cameras will issue citations. Lightfoot called it a public safety measure, especially in light of a spike in traffic fatalities during the pandemic, but many observers called it a money grab. The City Council approved the measure as part of the 2021 annual budget. <Source>

Notice they are not adjusting traffic fines downward, just using taxpayer funds to pay what they can’t collect…

The budget proposal calls for a $300 million fund from the federal government’s American Rescue Plan to support relief for low-income Californians through a one-time debt forgiveness program eliminating debt owed on traffic and non-traffic infraction tickets issued between Jan. 1, 2015 and June 30, 2021. <Source>

Rather than forgiving the fines and writing-off the amount owed, they want the taxpayers to pay the uncollectible tickets.

If the cameras are ineffective in reducing accidents, there is no justification for their existence. Many cities have ticket forgiveness programs or allow the courts to adjust amounts owed. The real crime is that everyone has their fingers in the pot.

The basic fine is determined purely by your speed at the moment you were stopped.

All traffic citations in California are subject to a 20% fee for all drivers – no exceptions. In addition, you’ll have to pay $40 in court fees and $35 for your conviction assessment. Additional costs may apply to some drivers, including:

Time to stop the theft of your hard-earned dollars to support a bloated, out-of-control government pandering to identity groups to gain political power.

BTW: Most red-light cameras do not catch as many vehicles running red lights as they do vehicles making illegal right turns on red lights.

In what universe would a political party promote a candidate who is a provably corrupt liar whose political schemes and machinations have cost Americans millions of dollars and actual American lives in Benghazi, Libya, and elsewhere? 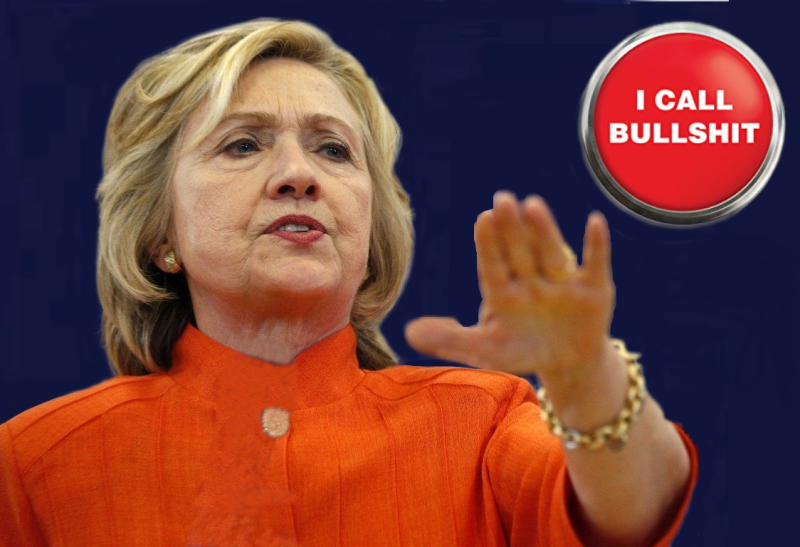 There are two answers that come readily to mind.

The progressive communist democrats have no viable national candidates and an abysmal record on foreign and domestic policies.

The media needs heroes and villains to generate controversy, translating into audience and revenues.

Now that the media moguls and tech tyrants have shown they are willing to censor or cancel their users to promote a political agenda or protect an existing narrative, the progressive communist democrats count on the suppression of Hillary Clinton’s negatives while excoriating former President Donald Trump. At the same time promoting false narratives and outright lies.

Before reading a piece on Hillary Clinton in the Wall Street Journal consider its dishonest source...

A pollster with long-standing ties to the Clintons boosts Hillary's candidacy while pretending to be an independent analyst.

But Schoen's problems go beyond mere establishment-perpetuating ideology. In light of the importance of perceptions of polling success for the Clinton campaign, Schoen -- ever since he left the Penn firm -- has been holding himself out as an independent polling analyst for Rasmussen Reports and other media venues, concealing his long-standing ties to the Clintons and writing one ostensibly objective analysis after the next which has no purpose other than to depict Clinton's candidacy as an inevitability. <Source>

Joe Biden and Kamala Harris have become unpopular. It may be time for a change candidate.

A perfect storm in the Democratic Party is making a once-unfathomable scenario plausible: a political comeback for Hillary Clinton in 2024.

Several circumstances—President Biden’s low approval rating, doubts over his capacity to run for re-election at 82, Vice President Kamala Harris’s unpopularity, and the absence of another strong Democrat to lead the ticket in 2024—have created a leadership vacuum in the party, which Mrs. Clinton viably could fill.

She is already in an advantageous position to become the 2024 Democratic nominee. She is an experienced national figure who is younger than Mr. Biden and can offer a different approach from the disorganized and unpopular one the party is currently taking.

If Democrats lose control of Congress in 2022, Mrs. Clinton can use the party’s loss as a basis to run for president again, enabling her to claim the title of “change candidate.”

Based on her latest public statements, it’s clear that Mrs. Clinton not only recognizes her position as a potential front-runner but also is setting up a process to help her decide whether or not to run for president again. She recently warned of the electoral consequences in the 2022 midterms if the Democratic Party continues to align itself with its progressive wing and urged Democrats to reject far-left positions that isolate key segments of the electorate.

Given the likelihood that Democrats will lose control of Congress in 2022, we can anticipate that Mrs. Clinton will begin shortly after the midterms to position herself as an experienced candidate capable of leading Democrats on a new and more successful path.

If Democrats want a fighting chance at winning the presidency in 2024, Mrs. Clinton is likely their best option. <Source>

How corrupt or crazy do you need to consider Hillary Clinton a viable 2024 candidate.

Two Democratic operatives see an opening for Hillary Clinton to run again for president in 2024.

A commentary article published in the Wall Street Journal on Tuesday makes the case that a "perfect storm" is brewing in the Democratic Party, including low approval numbers for President Joe Biden and Vice President Kamala Harris, as well as questions about whether Biden, now 79, will be viable to run for a second term.

All this creates a "leadership vacuum," according to Douglas Schoen, founder and partner of Schoen Cooperman Research, a polling and consulting firm whose past clients include Bill Clinton and former New York City Mayor Michael Bloomberg, and Andrew Stein, a former New York City Council president, Manhattan borough president, and state assemblyman. <Source>

It is my personal opinion that Hillary Clinton is a criminal and an as-yet unindicted co-conspirator in the criminal conspiracy that interfered with two presidential elections (2016 and 2020) and other crimes committed at her direction by a cadre of acolytes while at the State Department.

Time to watch the Communist Chinese and the back-door flow of funds into a Clinton candidacy.

We are being screwed again.