Dishonesty, distraction, and deflection to subvert the 2022 mid-term elections… 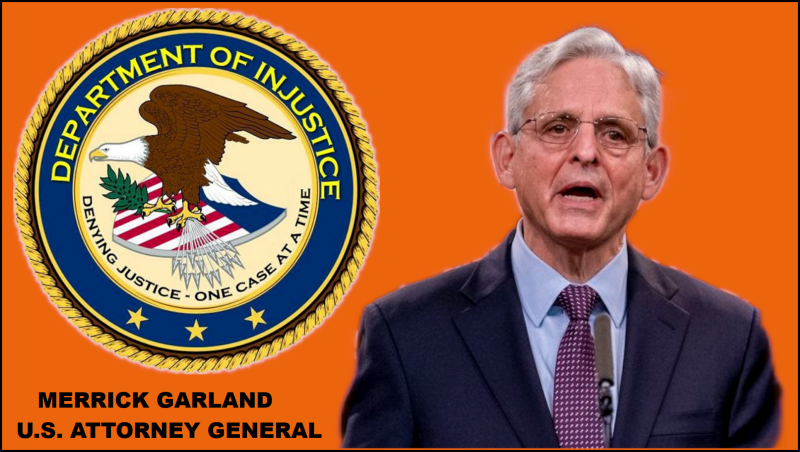 The progressive communist democrats and their propagandists in the media continue to exploit the hours-long January 6, 2020, riot at the Capitol complex to divert the nation’s attention from the decline and destruction of our nation from the criminality, incompetence, and ideology of the Administration under the Democrat’s watch.

Excerpts from Attorney General Merrick B. Garland Delivers Remarks on the First Anniversary of the Attack on the Capitol.

…as we begin a new year — and as we prepare to mark a solemn anniversary tomorrow – it is a fitting time to reaffirm that we at the Department of Justice will do everything in our power to defend the American people and American democracy.

We will defend our democratic institutions from attack.

We will protect those who serve the public from violence and threats of violence.

We will protect the cornerstone of our democracy: the right to every eligible citizen to cast a vote that counts.

And we will do all of this in a manner that adheres to the rule of law and honors our obligation to protect the civil rights and civil liberties of everyone in this country.

[OCS: Given the recent performance of the DOJ and the FBI, these are all BIG LIES!]

Tomorrow will mark the first anniversary of January 6th, 2021 — the day the United States Capitol was attacked while lawmakers met to affirm the results of a presidential election.

Those involved must be held accountable, and there is no higher priority for us at the Department of Justice.

In the early afternoon of January 6th — as the United States Senate and House of Representatives were meeting to certify the vote count of the Electoral College — a large crowd gathered outside the Capitol building.

Shortly after 2 p.m., individuals in the crowd began to force entry into the Capitol, by smashing windows and assaulting U.S. Capitol police, who were stationed there to protect the members of Congress as they took part in one of the most solemn proceedings of our democracy. Others in the crowd encouraged and assisted those who attacked the police.

Over the course of several hours, outnumbered law enforcement officers sustained a barrage of repeated, violent attacks. About 80 Capitol Police and 60 D.C. Metropolitan Police were assaulted.

With increasing numbers of individuals having breached the Capitol, members of the Senate and the House of Representatives — including the President of the Senate, Vice President Mike Pence — had to be evacuated.

As a consequence, proceedings in both chambers were disrupted for hours — interfering with a fundamental element of American democracy: the peaceful transfer of power from one administration to the next.

Those involved must be held accountable, and there is no higher priority for us at the Department of Justice.

In the aftermath of the attack, the Justice Department began its work on what has become one of the largest, most complex, and most resource-intensive investigations in our history.

[OCS: One might think that the criminality of the Obama Administration and the ongoing election operations which subverted presidential elections and brought about a fundamental transformation of our nation is the highest priority of an honest Justice Department.

If one considers the investigations into the assassination of John Kennedy or the terrorist attack on 9/11/2001where 2,996 people were murdered, or even the multi-year faux investigation of the Donald Trump/Russia hoax, to be the standards for resource-intensive investigations, one might ask why the DOJ is spending their time, effort, and money over an event that was relatively insignificant and did not even rise to the level of the 1983 bombing of the Senate or the 1954 Capitol Shooting by four Puerto Rican nationalists. Events memory-holed by the Democrats?]

We build investigations by laying a foundation. We resolve more straightforward cases first because they provide the evidentiary foundation for more complex cases.

[OCS: How complex can a case for criminal trespass be? It appears most of the “rioters” were lookie-loos taking selfies and souvenirs. Some of the most active participants were well documented but have never been charged – perhaps because they were associated with the FBI or other clandestine government agencies.]

Investigating the more overt crimes generates linkages to less overt ones. Overt actors and the evidence they provide can lead us to others who may also have been involved. And that evidence can serve as the foundation for further investigative leads and techniques.

In circumstances like those of January 6th, a full accounting does not suddenly materialize. To ensure that all those criminally responsible are held accountable, we must collect the evidence.

But most important, we follow the facts — not an agenda or an assumption. The facts tell us where to go next.

There is only one rule: we follow the facts and enforce the law in a way that respects the Constitution and protects civil liberties.

[OCS: Garland is lying. Ask any of the unconvicted political prisoners held under inhumane conditions which violate their civil liberties and amount to torture – to produce confessions, if only to stop the pain. Garland and others should be held accountable for their behavior.]

We conduct every investigation guided by the same norms. And we adhere to those norms even when, and especially when, the circumstances we face are not normal.

Adhering to the department’s long-standing norms is essential to our work in defending our democracy, particularly at a time when we are confronting a rise in violence and unlawful threats of violence in our shared public spaces and directed at those who serve the public.

[OCS: Still waiting for the investigation of communist front groups like Antifa and Black Lives Matter which caused billions in property damages, the attack on federal courts, and assaults on federal officers.]

It has become exceedingly hard to believe that the Attorney General of the United States, Merrick Garland, was once nominated by President Barack Obama to sit on the Supreme Court to replace esteemed Justice succeed Antonin Scalia.

"I have selected a nominee who is widely recognized not only as one of America's sharpest legal minds, but someone who brings to his work a spirit of decency, modesty, integrity, even-handedness and excellence.”

“At a time when our politics are so polarized, at a time when norms and customs of political rhetoric and courtesy and comity are so often treated like they’re disposable, this is precisely the time when we should play it straight,”

Described as a “centrist appellate judge by the radically progressive New York Times… “In choosing Judge Garland, a former prosecutor who has served on the Court of Appeals for the District of Columbia Circuit since 1997 and as its chief judge since 2013, Mr. Obama opted to select a jurist better known for his meticulous work ethic and adherence to legal principles than for an ideological bent.”

Merrick Garland is a dishonest schmuck that needs to be impeached after the 2022 mid-terms if the GOP prevails in the House and the Senate.

We are so screwed when party hacks and ideologues are appointed to high office or are embedded in the bureaucracy.

ARE THE SEATTLE POLICE TRYING TO COVER-UP A COMMUNIST FALSE FLAG OPERATION?

Did the Seattle Police Department, at the direction of progressive communist democrats, attempt a false flag operation involving knowingly false propaganda that was then amplified in the media?

The radio chatter about members of the Proud Boys marching around downtown Seattle, some possibly carrying guns, and then heading to confront protesters on Capitol Hill was an improper “ruse,” or dishonest ploy, that exacerbated a volatile situation, according to findings released Wednesday by the city’s Office of Police Accountability.

[OCS: But was it a ruse or just part of a planned propaganda plan to promote the white supremacist's narrative and provide cover for the communist front groups Antifa and Black Lives Matter who serve as the Democrat’s shock troops on the street?]

The Proud Boys is a far-right group with a reputation for street violence and with several members — including one from South King County — who have been charged with terrorism for alleged actions related to the Jan. 6, 2021, attack on the U.S. Capitol in Washington, D.C.

The ruse happened on the night of June 8, 2020, hours after the Police Department had abandoned its East Precinct on Capitol Hill and just as protesters were starting to set up the zone that was later called the Capitol Hill Organized Protest, or CHOP.

The officers who participated described a group gathering by City Hall and moving around downtown. They delivered reports such as, “It looks like a few of them might be open carrying,” and: “Hearing from the Proud Boys group. … They may be looking for somewhere else for confrontation.”

Social media posts warning about the Proud Boys by people who were monitoring police radio transmissions caused alarm in the protest zone, where some people armed and barricaded themselves that night. Though some people in the zone may have brought guns regardless of the chatter, the ruse “improperly added fuel to the fire,” OPA Director Andrew Myerberg concluded. <Source>

Can you trust any officials in Seattle after the police were ordered to “stand down,” leaving innocent residents and property at risk? Where are the prosecutions and prison sentences for these actual “insurrectionists?”

You can’t trust your elected officials, and in select cities across the United States, you can’t trust the police to perform their sworn duties. 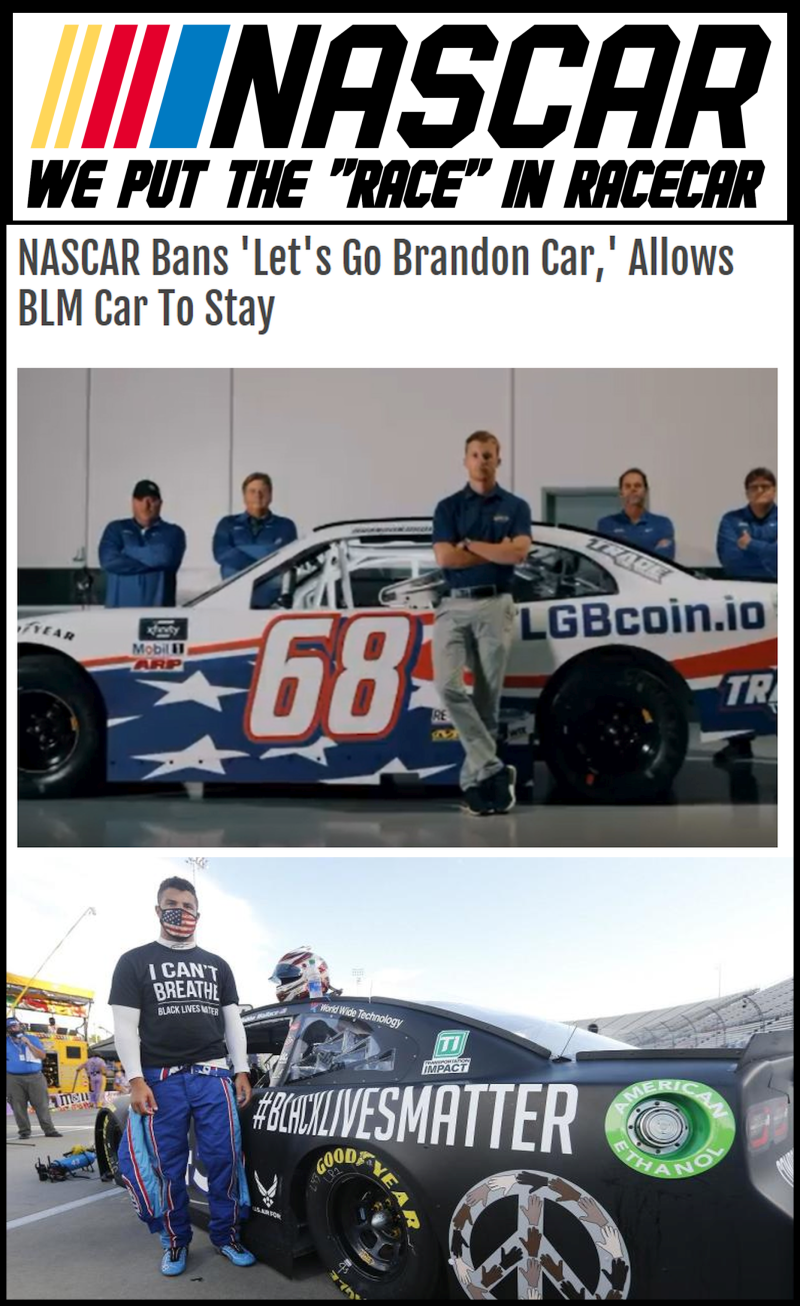 To say we are screwed when we see a cultural icon like NASCAR desecrated is an understatement. BTW: isn’t the schmuck driving the BLM-sponsored car the same peckerhead that misidentified a garage door pull for a noose?