THE GOP CONTINUES TO INSULT THE INTELLIGENCE OF ITS BASE

Yesterday, I pointed out that the GOP’s fundraising efforts were somewhat deceptive (BEFORE YOU DONATE TO THE GOP -- CHECK WHO IS RECEIVING THE DONATIONS). Today, I discovered that I was not alone in my disdain for GOP fundraising efforts.

It seems that PJ Media’s Matt Margolis experienced much the same thing.

The Most Inappropriate Fundraising Email I've Ever Received

On New Year’s Eve, I received an email that, quite frankly, worried me. The alert came on my Apple Watch, and the subject read: “WARNING: Payment Incomplete.”

Well, crap, what happened? Did a credit card expire without me realizing it? I panicked. Something was up, and I had to fix it right away. So, I quickly dropped what it was I was doing and went to the email to figure out the problem so I could fix it.

It turns out there was no problem at all. That was merely a rather tactless subject line of a fundraising email from the Republican National Committee.

“We just checked your Trump Social Media Founding Supporter membership status, and it appears that your payment is still pending,” the email read.

Look, I get that finding new ways to grab people’s attention is crucial to getting clicks and donations. Heck, this email clearly caught my attention. As soon as I saw the subject line, I went right to the email. But as soon as I saw what the email was about, I could not have been more turned off. So, instead of a donation, I unsubscribed from the list.

Not only was the e-mail deceptive and misleading, but it was also an indication of the disrespect the Republicans appear to have for their small donors. They continue to insult our intelligence with every fundraising pitch.

There is little or no doubt that the GOP spends so much time, effort, and money fighting among itself in the primary that when the general election comes, the opposition has a free catalog of vicious opposition video to throw at the surviving GOP candidate – surprising no one that the GOP, once again, snatches defeat from the jaws of victory.

The Republicans appear to be on their way to taking over the House of Representatives in 2022 and perhaps gaining a slight majority in the Senate. BUT NOT IF REPUBLICANS STAY HOME – disrespected and disillusioned by their party.

It’s time for the GOP to clean up their act.

We are so screwed when the GOP cannot articulate their values and put forth a solid platform – counting on that part of the electorate who votes against the progressive communist democrat opposition rather than supporting the GOP!

With ten months five days until the general election on November 8, 2022 – minus early voting days, we cannot afford to continue crapping on our base.

Vote for RESULTS, not RHETORIC.

It’s time for LEADERSHIP, not LIES. 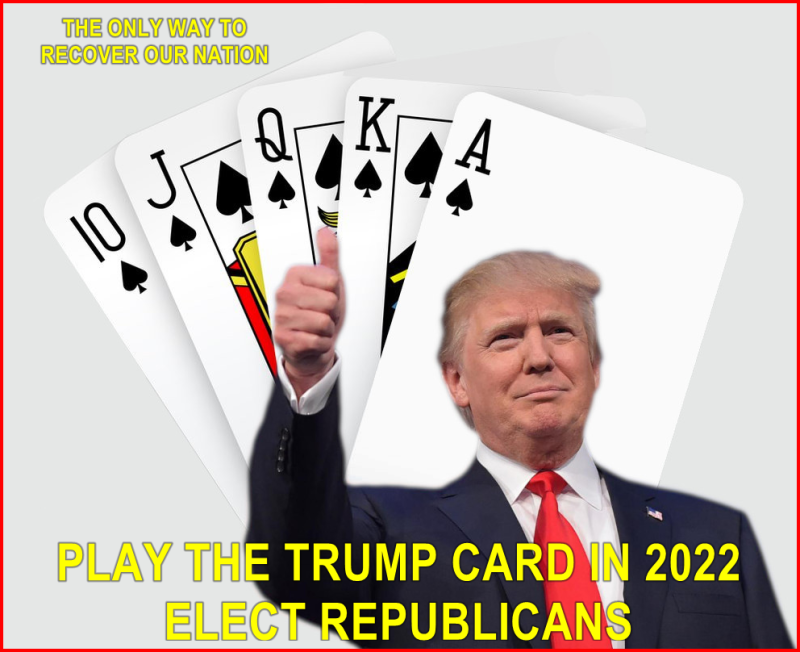