TIME FOR ADAM SCHIFF TO LOSE HIS CALIFORNIA LAW LICENSE

How can Representative Adam Schiff (D-CA) remain a licensed lawyer in the State of California when he appears to have knowingly, maliciously, and with malice aforethought, manipulated evidence that was submitted to the House of Representatives’ Select Committee to Investigate the January 6th Attack on the United States Capitol during a proceeding seeking a criminal complaint against former Trump White House chief of staff Mark Meadows?

Regardless of any single violation of ethics act committed by Representative Adam Schiff, it appears that this is representative of a pattern and practice of overtly dishonest duplicity with regards to Schiff’s prior behavior in the handling of evidentiary documents and testimonial transcripts.

To claim that Schiff’s conduct is permissible and he is exempt from the consequences of his actions under the "Speech and Debate Clause” (Article 1, section 6, of the U.S. Constitution) does not speak to Schiff’s overall character and conduct as a licensed attorney in the State of California. The general purpose of the speech and debate clause, to protect members of Congress from having to worry that anything they say in the course of legislative activities will implicate them in a lawsuit, is not the issue.

Schiff’s appearance of impropriety and his future credibility before any California Court after his service as a member of Congress is deeply troubling.

If you cannot trust our elected officials or our Courts, we are truly screwed…

After leaking fake Donald Trump, Jr. emails, fabricating the transcript of a 2019 phone call between former President Donald Trump and Ukraine’s president, and lying about his interactions with the so-called whistleblower behind House Democrats’ first impeachment of Trump, Rep. Adam Schiff, D-Calif., is now running the same con against a fellow lawmaker.

The following graphic, purportedly of the text message between a member of Congress and Meadows, then appeared on screen at Schiff’s direction: 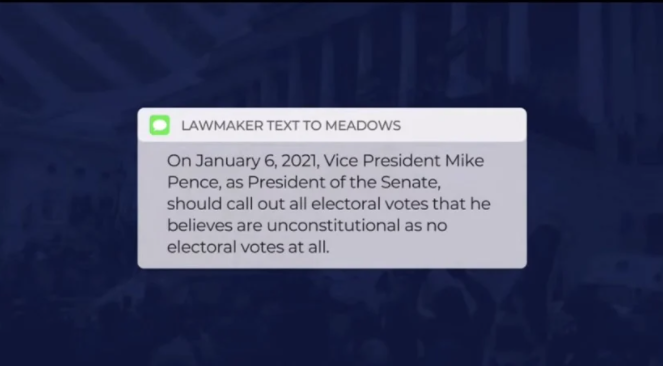 “This one reads, ‘On January 6, 2021, Vice President Mike Pence, as President of the Senate, should call out all electoral votes that he believes are unconstitutional as no electoral votes at all,’” Schiff continued. “You can see why this is so critical to ask Mr. Meadows about. About a lawmaker suggesting that the former vice president simply throw out votes that he unilaterally deems unconstitutional in order to overturn a presidential election and subvert the will of the American people.”

Not only did Schiff lie about the substance of the text message and its source, he even doctored the message and graphic that he displayed on screen during his statement. The full text message, which was forwarded to Meadows from Rep. Jim Jordan, R-Ohio, on the evening of Monday, Jan. 5, was significantly longer than what Schiff read and put on screen, but Schiff erased significant portions of the text and added punctuation where there was none to give the impression that Jordan himself was tersely directing Meadows to give orders to Pence on how to handle the electoral vote certification.

The original text was written by Washington attorney and former Department of Defense Inspector General Joseph Schmitz and included an attachment of a four-page draft Word document drafted by Schmitz that detailed Schmitz’s legal reasoning for suggesting that Pence had the constitutional authority to object to the certification of electoral votes submitted by a handful of states. The piece that Schmitz had sent to Jordan was published at the website everylegal.vote the next day and even included the same “DISCUSSION DRAFT” heading and timestamp on the document that Schmitz sent to Jordan.

“Good luck tomorrow!” Schmitz texted Jordan on the evening of Jan. 5, including the Word document as an attachment. Schmitz then texted to Jordan a three-paragraph summary of his Word document, which Schiff sliced and diced and then attributed to Jordan:

“On January 6, 2021, Vice President Mike Pence, as President of the Senate, should call out all the electoral votes that he believes are unconstitutional as no electoral votes at all — in accordance with guidance from founding father Alexander Hamilton and judicial precedence,” Schmitz texted. In his graphic, Schiff erased the final clause and the em dash preceding it and added a period to the first clause without disclosing that he or his staff had chopped up the text and created a fake graphic misrepresenting the actual contents of the text message.

In his statement and on-screen graphic, Schiff erased the final two paragraphs and the final clause of the first paragraph of the text message before inserting punctuation that was never there, all without disclosing what he was doing. The graphic displayed by Schiff, which was doctored to look like an exact screenshot, was similarly doctored, as it contained content that was never in the original message and eliminated content that was. <Source>

“The Select Committee on Monday created and provided Representative Schiff a graphic to use during the business meeting quoting from a text message from ‘a lawmaker’ to Mr. Meadows,” the spokesman wrote. “The graphic read, ‘On January 6, 2021, Vice President Mike Pence, as President of the Senate, should call out all electoral votes that he believes are unconstitutional as no electoral votes at all.’”

“In the graphic, the period at the end of that sentence was added inadvertently,” the spokesman admitted. “The Select Committee is responsible for and regrets the error.”

The Jan. 6 committee spokesman did not explain how one could “inadvertently” cut a sentence in half and eliminate the final two paragraphs of a detailed legal summary, nor did he explain why Schiff attributed the content of the text to Jordan, “a lawmaker,” rather than to Schmitz, the attorney who wrote it.<Source>

As long as Adam Schiff sits on the House Intelligence Committee and the illegal January 6th Attack committee (which is going beyond holding hearings based on “legislative intent and attempting to grab the wide-ranging powers of a U.S. Attorney) exists,  the nation is in deep trouble.