RACE-HUSTLERS AND POVERTY PIMPS: ENOUGH WITH THE TYRANNY OF THE MINORITY

The facts are simple and unambiguous…

In all of recorded history, disparities are found in nature. Some individuals were stronger, some weaker; some smarter and some less smart; some more physically adept than others; some born into preferential circumstances of wealth and privilege, others born into poverty, illiteracy, and suffering. However, America has no class or cast system, and individuals can move between classes dynamically and fluidly. Opportunities abound for those motivated and able to rise to the challenge.

As per the U.S. Constitution, all citizens are equal under the law; they are entitled to due process. Nowhere in the Constitution do you find “equity” guaranteeing equal outcomes.

Unfortunately, in their quest for power, the progressive communist democrats are creating new rights out of whole cloth and manufacturing grievances with the same intellectual dishonesty and deception.

They have turned our legal system upside down, where you must prove yourself innocent rather than require the state to prove you guilty. Even worse, you can be “technically” found guilty of a crime based – not on intent and actual wrongdoing but highly manipulated statistics. This is the basis of “disparate impact” found in employment, housing, finance, and the judicial system. Simply put, you are deemed to have committed a crime if one selected class is not represented in the proportion that the selected class appears in the general population.

An easy-to-understand concept. If a disproportionate minority population is denied loans compared to their representation in the general population, the cause must be systemic racism, and you are guilty of committing a racist act. These individuals may live in declining and decaying areas, have little or no collateral, have part-time jobs, and statistically are unlikely to pay their obligations is of less consequence than their membership in a minority class. The basis for race hustlers and poverty pimps to shakedown corporations who are more likely to settle than fight the charges and suffer reputational damages in a smear campaign.

And now we have the “reverse robin hood effect,” which is understood as robbing the poor to give to the rich. 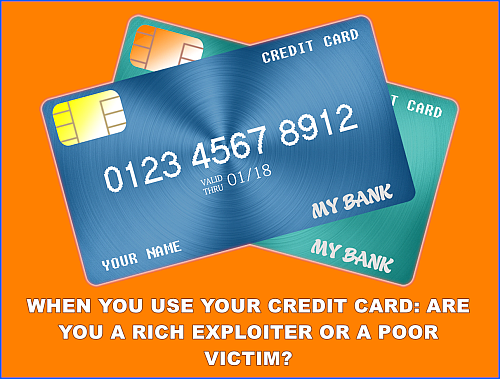 It appears that the same race hustlers and poverty pimps are trying to claim that “credit card reward programs are unfair because they create 'an implicit money transfer' to wealthy cardholders from lower-income people who buy things with cash or debit cards.” Backed up by two studies from the Boston Federal Reserve.

In the United States and Canada, merchants generally do not differentiate prices based on payment methods. Instead, they pass through their costs of accepting payment methods to all consumers, even though credit cards are more expensive for them to accept than either debit cards or cash. As a result, credit card transactions are cross-subsidized by lower-cost debit and cash payments. Card rewards and consumer fees paid to financial institutions may be other sources of cross-subsidies. Credit card rewards are proportional to the amount charged on a card. This disproportionately benefits higher-income consumers, who are more likely to hold rewards cards, tend to hold cards with higher reward levels, and tend to spend more on those cards. <Source>

Merchant fees and reward programs generate an implicit monetary transfer to credit card users from non-card (or "cash" ) users because merchants generally do not set differential prices for card users to recoup the costs of fees and rewards. On average, each cash-using household pays $149 to card-using households and each card-using household receives $1,133 from cash users every year. Because credit card spending and rewards are positively correlated with household income, the payment instrument transfer also induces a regressive transfer from low-income to high-income households in general. <Source>

What is really happening…

The elite progressive communist democrats are trying to strengthen the surveillance state by demanding complete access to your financial information in the guise of regulating financial institutions, monitoring fair credit programs, and developing class-protective legislation that confers great power to the unelected bureaucrats in power.

This is the Elizabeth “Fauxcahontas” Warren model of surveillance. First attempted when she architected the CFPB (Consumer Financial Protection Bureau) that was immune from dependence on Congressional funding and led by a director instead of a commission. It is important to note that Warren was appointed multiple times to head the agency she created by President Barack Obama but failed to be confirmed by the Senate,

The elite progressive communist democrats are attempting to legally capture all of your financial information – aided and abetted by a very vocal cadre of race hustlers and poverty pimps.

Is this the doing of Rashida Jones, the President of MSNBC? 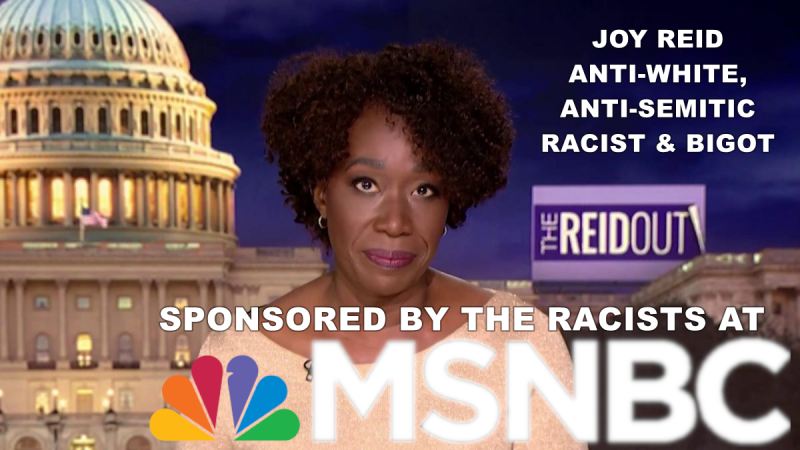 Wasn’t it the Democrats who left dozens of California schoolchildren behind enemy lines in Afghanistan?

Isn’t it the Democrats who fund and operate abortion clinics primarily located in black areas? Wasn’t the founder of Planned Parenthood, Margaret Sanger, a virulent racist and a believer in the inferiority of blacks?

Isn’t it the Democrat Party who brought us slavery, segregation, Jim Crow, the KKK, and who fought civil rights legislation?

Wasn’t it President Biden who was a de facto segregationist and supporter of KKK members early in his career?

Joe Reid is not only a racist and bigot; she is either ignorant of history or just another MSNBC liar following the corporate script.

Joy Reid is what’s wrong with America. To give her a microphone, MSNBC is complicit in racism and bigotry.

BTW, how does one “side with a virus?”