IS TWITTER THE POLITICAL MEME KILLER TO AVOID DEMOCRAT EMBARRASSMENT IN 2022 CAMPAIGN CYCLE? 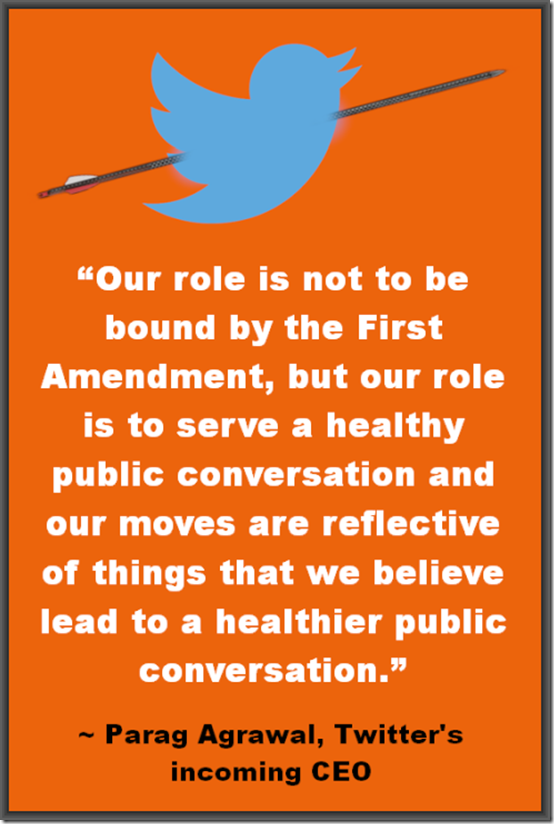 How progressive is Agrawal?

(1)  Treatment of publisher or speaker

No provider or user of an interactive computer service shall be treated as the publisher or speaker of any information provided by another information content provider.

(A) any action voluntarily taken in good faith to restrict access to or availability of material that the provider or user considers to be obscene, lewd, lascivious, filthy, excessively violent, harassing, or otherwise objectionable, whether or not such material is constitutionally protected; or

(B) any action taken to enable or make available to information content providers or others the technical means to restrict access to material described in paragraph (1).

When we are notified by individuals depicted, or by an authorized representative, that they did not consent to having their private image or video shared, we will remove it. This policy is not applicable to media featuring public figures or individuals when media and accompanying Tweet text are shared in the public interest or add value to public discourse.

[OCS: Determining the public interest of content and whether or not it adds value to the public discourse is a “publishing” decision. Especially when it is based on non-objective (subjective) criteria such as political affiliation or the official government position which is often propaganda to support the administration in power.]

However, if the purpose of the dissemination of private images of public figures or individuals who are part of public conversations is to harass, intimidate, or use fear to silence them, we may remove the content in line with our policy against abusive behavior. Similarly, private nude images of public individuals will continue to be actioned under our non-consensual nudity policy.

[OCS: One could make the case that the disclosure of ANY factual information can be construed as embarrassing, harassing or intimidating behavior. Especially if that information is speculative or part of a hypothetical scenario.]

[OCS: Private information is a subjective classification which can be expanded to fit almost any circumstance. Where are the definitions?]

There are growing concerns about the misuse of media and information that is not available elsewhere online as a tool to harass, intimidate, and reveal the identities of individuals. Sharing personal media, such as images or videos, can potentially violate a person’s privacy, and may lead to emotional or physical harm. The misuse of private media can affect everyone, but can have a disproportionate effect on women, activists, dissidents, and members of minority communities. When we receive a report that a Tweet contains unauthorized private media, we will now take action in line with our range of enforcement options. <Source: Twitter>

The revolution will not be reported.

One only needs to consider the issue of Hunter Biden’s laptop, Project Veritas’s revelations, and Andy Ngo’s exposure of Black Lives Matter and Antifa to see what Twitter is contemplating – censoring content or canceling individuals whose content runs counter to Twitter’s corporate masters.

The suppression of the Biden laptop information from a credible journalist source, The New York Post, was deliberate interference with a presidential election and post-election polling indicated it would have possibly altered the outcome. For footage like that taken by Andy Ngo of BLM rioters, this footage would likely be suppressed due to the presence of “private” individuals who did not provide consent.

REVOKE SECTION 230 PROTECTIONS FROM ANY PLATFORM THAT ATTEMPTS TO CONTROL FREE SPEECH OTHER THAN LEGALLY ACTIONABLE IMMINENT THREATS AND CALLS FOR VIOLENCE.

We are so screwed when community communications are interrupted by corporatized media platforms.