DR. OZ: PROGRESSIVE GRIFTER TO RUN AS A REPUBLICAN?

Capitalizing on his name recognition, millions of followers, and friendship with Oprah, celebrity physician and TV show host Dr. Mehmet Oz has announced his candidacy as a Republican in a run for the U.S. Senate representing Pennsylvania. 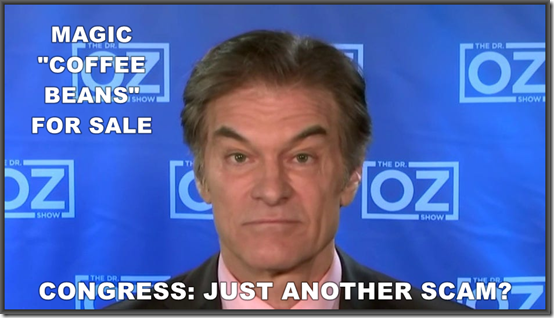 The FTC alleged that weeks after green coffee was first promoted on The Dr. Oz Show, the defendants behind Pure Green Coffee – Nicholas Congleton, Paul Pascual, Bryan Walsh, and the companies they control – began selling their Pure Green Coffee extract, charging about $50 for a one-month supply. They marketed the dietary supplement through ads on their own sales websites. The sites featured footage from The Dr. Oz Show, supposed consumer endorsements, and purported clinical proof that dieters could lose weight rapidly without changing their diet or exercise regimens. The defendants also ran paid banner and text ads that appeared on search engines and <Source>

Oz, the doctors say, is guilty of "outrageous conflicts of interest," "flawed judgements," or both

In a letter addressed to Dean of the Faculties of Health Sciences and Medicine, ten physicians, surgeons and professors accuse Oz of being "guilty of either outrageous conflicts of interest or flawed judgements about what constitutes appropriate medical treatments, or both." They refer to articles calling Oz out for his misleading, fear-mongering reports about arsenic in apple juice and genetically modified foods -- the doctor, they write, "has repeatedly shown disdain for science and for evidence-based medicine, as well as baseless and relentless opposition to the genetic engineering of food crops."

"Worst of all," the letter continues, "he has manifested an egregious lack of integrity by promoting quack treatments and cures in the interest of personal financial gain."

From the British Medical Journal…

Televised medical talk shows—what they recommend and the evidence to support their recommendations: a prospective observational study

The kiss of death?

It appears Dr. Oz is confirming that he is a clueless schmuck and an aisle-hopping RINO (Republican In Name Only).

Should he choose to enter the electoral fray, Dr. Oz already has two icons whose political path he said he would like to follow: California bodybuilder-turned-actor-turned governor, Arnold Schwarzenegger, whom he calls a “wonderful” guy and a “good chess player too” (and whose picture sits proudly in Dr. Oz’s office alongside a bottle of wine the Governator gave him for moderating his health summit in July 2006); and Teddy Roosevelt, the original boot-strapping individualist.

“Teddy Roosevelt to me was the ideal Republican,” he said. “He was someone who felt strongly about the need for individuals to make the place work better without having someone tell them how to do it. But they had an obligation to do that as well. It wasn’t a favor for the country; it was an obligation as Americans. <Source>

Californians will long remember Schwarzenegger, the corrupt, ineffective, wannabe Kennedy, and faux environmentalist, who gave us record-high taxes, schtupped the maid, painted out California’s First Lady on the official portrait, commuted between Sacramento and Santa Monica almost daily on a private jet, and commuted the sentence of the murderous son of a high-ranking Democrat as a political favor as he walked out the door. A master of fundraising, dark money, and slush funds.

History reveals that Teddy Roosevelt was an aggressive progressive, seeking to bring “radical transformation” to the nation. He may have been the last progressive president who also exhibited a modicum of commonsense.

Pennsylvania and the country do not need another corrupt egomaniacal celebrity aisle-hopper who will advance the progressive communist democrat agenda with the support of his uber-liberal Hollywood pals. He may be a good cardiac surgeon, but the country does not need a surgeon; it needs a patriot.

We are so screwed when celebrities bollix-up politics.