THE HIDDEN ATTACK VECTOR AGAINST THE UNITED STATES

There is no doubt in my mind that we are under attack by the progressive communist democrats who represent our enemies, both foreign and domestic. A great number of useful idiots are acting at the direction of communist-infiltrated unions, both public and private, with the teachers’ unions being the most virulent of the attack vectors.

Mathematics as a weapon…

There is absolutely no doubt in anyone’s mind that mathematics is the language of science, technology, engineering, medicine, and without mathematics, all forward progress in these fields is not only halted but circumvented and regressed.

So why am I not surprised that the teachers’ unions are attempting to radicalize and racialize mathematics. Claiming that social justice and equity demand reducing mathematics to the lowest common denominator and eliminating special programs for the best and brightest children?

The idea that not giving everybody an equal chance to learn mathematics at the highest levels is racist in and of itself. Not everybody has an equal ability to learn mathematical principles any more than they have the natural athletic talent to play sports at an elite level. Short people are unlikely to compete in basketball, slight people in football, and those with poor hand/eye coordinating in almost every sport. Reality trumps racism.

The idea that numbers are racist appears to come from flawed reasoning: numbers are symbols, some symbols are racist; therefore, some numbers must be racist. Ignoring, of course, that symbology is an artificial construct that can be construed in the context of those who seek to define it. Therefore, people with neutral intent see symbols useful for mathematical operation; others, racists, see symbols as racist and signs of oppression. In reality, they are neutral symbols. Want to eliminate the racial connotations? Eliminate the racists!

The color of idiocy… 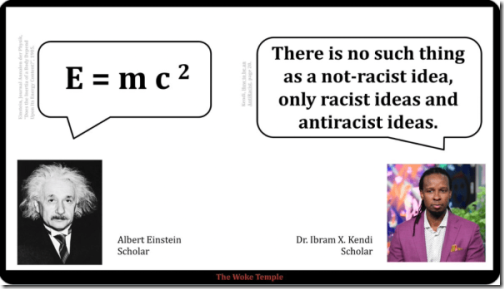 “There’s a huge problem with math instruction right now. The way things are set up, it’s not giving everybody a chance to learn math at the highest levels.” -- Rebecca Pariso, math teacher at Hueneme Elementary School District <Source>

There is no such thing as equality in life. Human nature abhors a vacuum and will always allow for a disparity between the strong and the weak, smart and the less smart, wealthy and the poor, the leaders and the followers, the producers and the consumers, ad infinitum. Rebecca Pariso appears to live in a fantasy world. The objective, not subjective, truth is, not everybody has the ability or opportunity to learn math at the highest levels.

The most important factors in mathematical education are:

The use of critical race theory as a guideline to the formation of teaching principles in mathematics is not only un-American, counter-productive, but it is downright traitorous as it weakens America’s ability to maintain her national security and economic prosperity at the expense of individual citizens. And I might add, legal citizens and residents.

Here in California, especially in San Francisco, where the elite are isolated from the consequences of their actions, there is a certain unreality about politics and the real world. Failures are feted as a learning experience.  And fraud is acceptable if you have up-streamed a portion to the powers that be as a license to offend or simply as tribute.

The fact that most students have issues with cursive script, telling time with an analog watch, computing without a calculator, research using books, or writing without cut and paste – and spell check, says more about today’s teachers’ unions, teachers, and administrators than it does about racializing mathematics.

IT IS ALL A DISTRACTION FROM THE WEAPONS BEING USED TO DESTROY AMERICANS FROM WITHIN.

We are so screwed,