EVEN WHEN THE INFORMATION ORIGINATES WITH CORRUPT OR IGNORANT POLITICIZED PUBLIC OFFICIALS? 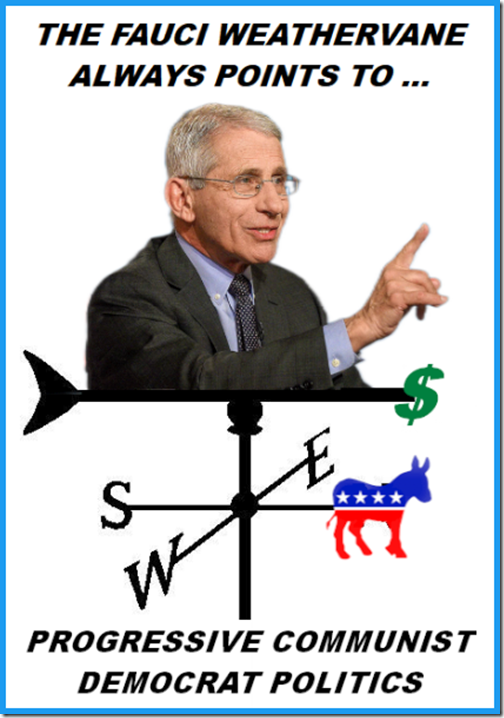 I have long said, “opinions are like assholes; everyone has one.” And, as the National Institutes of Health Director, Dr. Francis Collins seems to ignore, that the Constitution’s First Amendment protects opinions.

NPR's Michel Martin speaks with Dr. Francis Collins, director of the National Institutes of Health, about the best ways to protect yourself from the coronavirus heading into the holiday season.

MARTIN: Well, I hope it's a wonderful occasion. You recently announced that you'll be stepping down as NIH director soon. And I just wanted to ask you and along with saying, you know, thank you for this - these years of service, what's still worrying you most about our nation's health, looking at all of the things that you've thought about and addressed in your years in this role?

COLLINS: Well, it's been a complete privilege to have a chance to serve in this role for 12 years. And certainly, looking at the COVID situation, I'm amazed at what science has been able to do to respond to this. But I'm still worried about where we are. And frankly, Michel, the thing that worries me most is the way in which misinformation and, frankly, disinformation has become so prominent in the face of a public health crisis. And it has been manipulated in some situations for political reasons in a fashion that is turning our culture wars into something really serious.

We probably lost 100,000 people to COVID-19 who were unvaccinated because they had information that told them that this wasn't something that would be safe for them. And that's heartbreaking. And it is kind of a breakdown, it seems to me, in our society of the ability to distinguish opinions from truth. And if we've lost that ability, if we can't sort through the evidence and understand what's real and true, then I worry about all kinds of other challenges that lie ahead for us.

[OCS: The truth is fairly simple: (1)  Under the United States Constitution, the government has no authority to compel citizens to take any medical treatments using drugs with adverse side-effects, unknown short-term and long term efficacy, and ignoring their might be other available therapeutics to treat the disease; (2), there is no legal or moral justification for a government to side-step the constitution by encouraging private enterprises to demand vaccination as a condition of housing, employment, or receiving other goods and services; (3), since an individual’s physiology and medical condition varies, any treatment should be based on an informed opinion guided by the physician who knows the individual; and (4) the science is unsettled, evolving, and their is credible (not anecdotal) evidence that alternate therapies may be effective for some individuals.]

MARTIN: So misinformation is the deadliest disease at this point.

COLLINS: It is. And I think those who are intentionally spreading this kind of information that they know to be false for some political or personal reasons, I really think they are the ones that we ought to be trying to track down and figure out, why are you doing this? And isn't there some kind of justice for this kind of action? Isn't this like yelling fire in a crowded theater? Are you really allowed to do that without some consequences?  <Source>

Amazingly, Collins doesn’t seem to understand that science is a methodology of controlled skepticism. One puts forth a hypothesis, designs an experiment or develops analytical methods, observes the results, publishes their findings and conclusions, and then is subject to other hypotheses, findings, and conclusions that replicate, validate, or falsify their work. An ongoing process that respects others with different viewpoints.

The government has changed the definition of a vaccine. Now they are suggesting that fully vaccinated may not be receiving two shots of the Moderna or Pfizer vaccines or a single shot of the Johnson & Johnson vaccine. It might require additional boosters every six months or every year.

Who can you believe? The politicians? Public-facing scientist/doctor/politician spokespeople? The demonstrably dishonest media? Beats me. I choose to believe my own medical team and ignore the others.

Many intelligent, well-educated, and well-credentialed individuals are qualified to provide alternate hypotheses, counterfactual evidence and challenge the government’s assertions. To the extent that these individuals are censored, canceled, investigated, or punished is a crime against science and the sum total of the world’s knowledge-base.

To the extent that individuals must be protected from “misinformation” for their own good, is first to assume some authority figure is knowledgeable, honest, correct, forthright, and unbiased by a personal or professional agenda; and second, to believe that the government or an individual has a legal or moral right to infantilize adults in some misguided belief that they, the experts and the elites, must protect individuals from themselves.

One can only wonder what a Francis Collins or a Antony Fauci is afraid of? Losing their cushy well-paid job with its perks and privileges, their reputation, political standing, or place before the cameras and microphones?

As far as I am concerned, we have been screwed by both men as they have both screwed the pooch as to an effective response to the Communist Chinese virus.