Just in time for Halloween, comes the ironically-named novel “State of Terror,” the latest Hillary Clinton production where, of course, the author’s names are more prominent than the title… 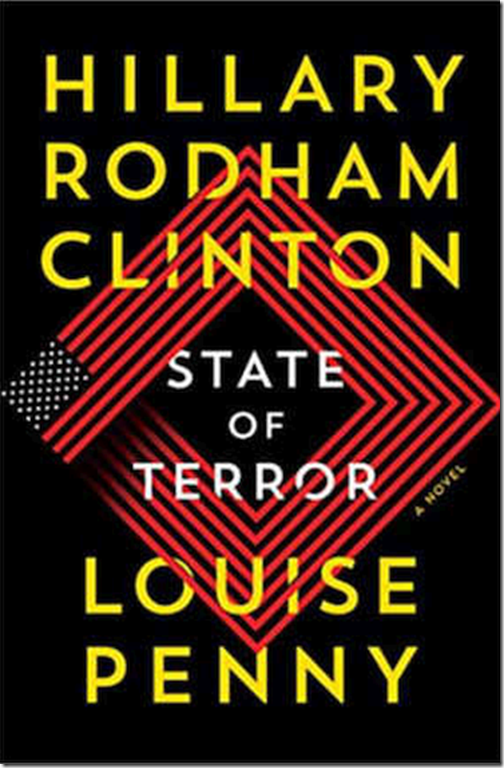 Filled with leftist tropes and media-worthy hooks, the plot is about what you would expect from a Marxist with a corrupt ego-centric worldview.

Imagine that the United States had been previously governed by a “delusional” Republican president named Eric Dunn – obviously a wordplay on Trump’s son. He was labeled “President Dumb” by the White House residents. Of course, the increasingly deranged President Dunn did the unthinkable, “pulled out of a nuclear accord with Iran.” leading to the rise of terrorists who could buy or steal nuclear weapons for use against the United States. As if this the same couldn’t be done with the help of fanatics in Pakistan or North Korea. So much for Trump.

The current President, Democrat Doug Williams, is characterized as “rude” and a “fool.” So much for Biden.

More troubling are themes which posit that a nation’s enemies are internal and suggesting there might be some value in co-operating with hostile foreign countries.

“The plot in “State of Terror” is ambitious and apocalyptic. Nothing less than the future of the world is at stake. As the novel begins, Ellen Adams, the former proprietor of an international media empire, has been improbably appointed U.S. secretary of state by Douglas Williams, the condescending President whose candidacy she had opposed.”

“Clinton and Penny reserve their darkest shade for former President Eric Dunn, a preening, bombastic one-termer who shredded the country’s reputation and retreated to Florida to sulk, play golf and plot his return. Sure, Dunn is charismatic, with an uncanny ability to exploit people’s weaknesses, but he is also an idiot. Even his closest associates called him ‘Eric the Dumb.’” <Source>

“Sometimes, the contributions are easy to identify. Here’s Secretary Adams trying to get vital intel from a State Department staff laced with the remaining acolytes of Eric the Dumb: “Ellen couldn’t read these people. They were schooled in hiding their true feelings, certainly their true thoughts. This was partly because of their diplomatic and intelligence training and partly as a result of four years being punished for revealing anything resembling a fact, never mind the truth.” Here and elsewhere in the novel, there is the added frisson of wondering how much of Adams’ opinions and interactions reflects Clinton’s experiences, shared more openly under cover of fiction. That it is hard to tell is a credit to the plausibility of the plot and characterizations that are all too human.” <Source>

“What begins as a series of apparent terrorist attacks is revealed to be the beginning of an international chess game involving the volatile and Byzantine politics of Pakistan, Afghanistan, and Iran; the race to develop nuclear weapons in the region; the Russian mob; a burgeoning rogue terrorist organization; and an American government set back on its heels in the international arena.

As the horrifying scale of the threat becomes clear, Secretary Adams and her team realize it has been carefully planned to take advantage of four years of an American government out of touch with international affairs, out of practice with diplomacy, and out of power in the places where it counts the most.

’To defeat such an intricate, carefully constructed conspiracy, it will take the skills of a unique team: a passionate young FSO; a dedicated journalist; and a smart, determined, but as yet untested new secretary of state.” <Source>

One cannot help but wonder if this book is a staged “red herring” designed to fictionalize, confuse, and conflate real conspiratorial matters that are coming to light with the serious indictment of Perkins-Coie attorney Michael Sussmann, a known Democrat operative working on behalf of, you guessed it, co-author Hillary Rodham Clinton.

Considering the amount of media attention, perhaps the grand Clinton conspiracy can be muted – if it isn’t canceled or censored by the tech tyrants and media moguls.

We are so screwed that this human piece of garbage is feted in the media rather than in a jail cell.

HOW MUCH DEMOCRAT DAMAGE TO AMERICA WILL PEOPLE TOLERATE?

Our nation is in peril, not so much from external forces, but the internal forces of American Marxism (aka communism), which is being perverted into a system to perpetuate the power and profits of the “elite” leaders of our nation, the very people that communism reviles and revolts against. It is increasingly ironic that those who scream “systemic racism” are those controlling the system. And you can be damn sure that they do not want to give up their power. Ask yourself how Fidel Castro died a billionaire while his fellow Cubans lived in poverty and squalor under communism – where 99.9% of the people are EQUALLY miserable?

The Democrat Party no longer exists, and its one-time patriotism is long gone. They are evil precursors to the decline and eventual transformation of America into an unexceptional third-world nation.

Did you ask a corrupt, mentally-incapacitated President, managed by minders, and a razor-thin Democrat majority in the U.S. Congress to fundamentally change the United States’ economy?

Did you ask our government to disarm our nation and compromise our military unilaterally?

It appears that the only state secrets that are sacrosanct are those relating to the criminality and unconstitutionality associated with the Obama and Biden administrations. With a super-secret classification on anything involving former President Barack Obama, Hillary Clinton, and a minimal cadre of top-level “friends.”

Why is the Biden Administration following in the footsteps of former President Barack Obama and trying to rehabilitate the Iranian economy and ensure they become a nuclear power with control over the Middle East region?

There is little doubt in my mind that Obama and John Brennan, the Director of the C.I.A., were both anti-America, anti-Israel, pro-Iran Islamicists that saw the creation of a nuclear Iran as a solution to “stabilize” the Middle East. Yeah, right!

Since the Obamacons run Biden, there is little doubt that Obama’s wishes are being executed to the detriment of the United States. In fact, what other reason can be given to ensure that America’s energy independence is reversed and we start pumping dollars into the hostile Middle East as they provide oil to a now-needy America?

We are living in perilous times – with the progressive communist democrats at the root of the evil. Not that they are not being assisted by a spineless GOP, unwilling to take decisive action to save our country.

It appears that the Democrat Party, and the establishment wing of the G.O.P., actually admire the Chinese authoritarian model of government and would like to implement aspects of its top-down surveillance and population control here in the United States.

And the billionaire fools, knaves, and useful idiots are helping the Democrat-Communists to walk into our nation – and being welcomed by those who have the most to gain. I wonder if they read and understand historical precedent – that they will be the first ones executed come the revolution?