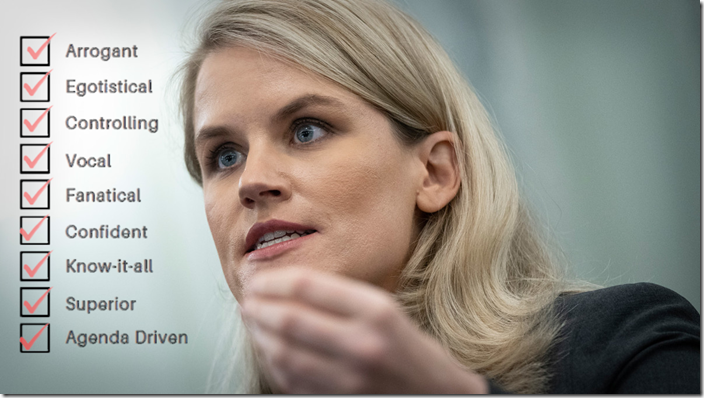 The basis of her claims…

Facebook has conducted internal studies that found Instagram is harmful to teen girls and exacerbates body image issues, anxiety and depression — even though the company’s executives have publicly extoled the mental-health benefits of social media, a new report says. <Source>

Frances Haugen, a former Facebook employee, filed at least eight separate complaints with the Securities and Exchange Commission, alleging that the social network "misled investors and the public about its role perpetuating misinformation and violent extremism relating to the 2020 election and January 6th insurrection," including removing "safety systems" put in place ahead of the 2020 election. <Source>

Haugen argues that there should be more control over speech that someone (progressive fact-checkers) or something (an algorithm) should be more restrictive. That speech needs to be monitored by a governmental agency and overseen by knowledgeable individuals like herself.

Haugen not only misrepresents the documents she stole from the company but demonstrably exaggerates their importance. Further scrutiny reveals Haugen had little or nothing to do with the activities she now deplores and has a history of activism at her previous jobs with other companies.

(2)  As for misinformation or disinformation, one need merely look at the New York Times, where politically-driven misinformation and disinformation abounds. The New York Times historically minimized coverage of the Holocaust and deliberately reported Stalin’s propaganda about the mass murder in Ukraine. More recently, ignoring all credible stories about unconstitutional changes in voter laws, serious flaws in the election process, and suppressing news about Hunter Biden’s laptop that may have materially affected the election’s outcome had it been widely reported. Then there is the minimization of President Biden’s mental incapacity to lead the nation and the various government-driven vaccine stories – many of which proved to be misinformation. Not to mention four years of the Clinton Russia hoax that they positively knew was a Hillary Clinton production or the Obama-era domestic spying.

Yet, you do not hear Haugen calling for tighter restrictions on television, radio, podcasts, newspapers, and other publications. Only Facebook where news is aggregated, shared, and commented upon.

It is not a matter of coincidence that Haugen’s activities are associated with major Democrat machine operatives from the Obama administration who played a major role in the anti-Trump movement and the interference with the 2020 election. Imagine, Haugen, being advised by White House Press Secretary Jen Psaki’s PR firm, Psaki,a known liar, appears to have no trouble lying and spinning for an incapacitated President Biden and his dysfunctional administration.

Frances Haugen is being advised on public relations and strategic communications by Bill Burton, a former Obama administration official and founder of Democrat-linked consulting firm Bryson Gillette and political action committee Priorities USA Action, The Washington Free Beacon reported Monday. Burton is also listed as a public affairs representative for the non-profit Center for Humane Technology, which has criticized Facebook and other social media platforms for permitting misinformation and harmful content.  <Source>

From all appearances, former Facebook employee Frances Haugen is a democrat plant to further their crusade against conservatives and contrarians using the inside-outside strategy.

For those unfamiliar with the inside-outside strategy it is fairly simple to understand and execute.

1.  Start with a fanatical committed individual who is accomplished and articulate.

2.  Have them steal and leak company-sensitive documents to selected media sources.

3.  Use the selected media sources to create a controversy, even if none exists.

4.  Use selected members of Congress to amplify the media reports of the faux-controversy, calling for hearings and “whistleblower” testimony.

5.  Use the media to amplify the “whistleblower” testimony.

6.  Use the threat of regulatory oversight and sanctions to coerce the company into taking the desired action without actually creating any rules and regulations that are likely prima facie unconstitutional.

Frances, tell me again about disinformation and censorship...

The Facebook civic integrity team that leftist activist whistleblower Frances Haugen was a member of, worked to counter misinformation about the 2020 election.
Which in October of last year meant making the decision to suppress the Hunter Biden laptop story and the New York Post’s reporting on it. <Source>

Remember, the Hunter Biden laptop story that was ignored or dismissed as Russian disinformation -- although the FBI had a chain of custody file including Biden's signature when he left the laptop at the repair shop. The laptop contained evidence of guns, hookers, drugs, and criminal action implicating his father, the presidential candidate Joe Biden.  It was all true and documented. What say you now, Frances Haugen? Especially when this suppressed information blatantly interfered with the 2020 election and could have tipped the balance of power -- and prevented the current catastrophe that has befallen America.

We are being played by the progressive communist democrats...

Facebook whistleblower Frances Haugen, who testified before Congress on Tuesday about her former employer, will be meeting with House committee investigating the Jan. 6 attack on the U.S. Capitol, CNN reported, citing three sources.

The House select committee could hear from Haugen as early as Thursday, according to the network. The lawmakers on the committee are tasked with investigating the events surrounding the Jan. 6 insurrection, in which supporters of former President Trump stormed the Capitol in an effort to stop Congress from certifying Joe Biden’s 2020 election win.

CNN reported that the committee wants to know from Haugen how the platform was used to organize and encourage the violent protest. <Source>

This is far beyond her scope of knowledge and simply part of a dog and pony show.

"According to this Facebook whistleblower, shutting down the civic integrity team and turning off election misinformation tools contributed to the Jan 6 insurrection," Schiff tweeted. "The Select Committee will need to hear from her, and get internal info from Facebook to flesh out their role."

Of course, the conclusion will be: social media must muzzle conservatives and contrarians to save our nation and Congress needs to take action now.

Frances Haugen is simply the next in line to act as a useful idiot to increase the Democrat’s control over free speech in the run-up to the 2022 and 2024 elections, where they have an abysmal record of both domestic and foreign policy failures.

Simply put, the progressive communist democrats want to become the referees at the fight they caused.

The one question that Frances Haugen doesn't want to answer: "Why does Facebook block President Trump while allowing  a page for Ayatollah Ali Khamenei to threaten 'Death to America'?"