If you need proof that our fiat currency is a conspiracy between the government’s Department of the Treasury and the privately-owned Federal Reserve – and that the Congressional budget process is little more than Kabuki Theater to mask the theft of taxpayer money, look no further than these stories about your government.

And here comes the surveillance state, made more fascistic as the government coerces private companies to act as their secret agents to do what may be legally impermissible – including domestic spying on innocent American citizens without a warrant backed by probable cause.

And, the government is planning to see everything you purchase and your money will belong to them…

The devil is in the details, and the Democrat Party is pure evil. Remember that at the polls in 2022 and stop this madness.

Once again, we are witness to a classic case of Democrat projection, where the progressive communist democrats blame the opposition for their own attitudes, actions, and failures, 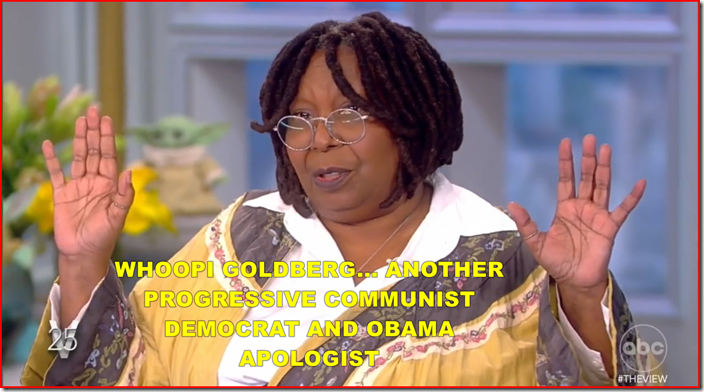 Here comes Whoopi Goldberg, one of the co-hosts on ABC’s “The View,” an irrelevant progressive democrat propaganda site masquerading as a daytime television talk show. Goldberg’s unfounded assertion is that “she believed that much of the nation has post-traumatic stress disorder (PTSD) from the Donald Trump presidency, including ‘people who voted for him.’”

Ludicrous, because it is the progressive communist democrats who are freaking out because it seems that the greater public now has confirmation of the Democrat's nefarious activities, many of them criminal in nature, that link back to Barack Obama, the Manchurian candidate, and his communist-dominated presidency.

Like criminals everywhere, it’s always the “SODDI” – “Some Other Dude Did It” defense. Knowing they are wrong, but yelling at the top of their lungs – protesting their innocence and pointing somewhere else.

Whoopi Goldberg: ‘We As a Nation’ Have Trump PTSD — ‘Even the People Who Voted for Him’

While discussing former Trump administration Press Secretary Stephanie Grisham, former White House director of strategic communications Alyssa Farah said, “It seemed like she was largely MIA on the job. I will say this. I think the book — it’s just disingenuous. She wasn’t just a Trump staffer for all four years. She was an originalist. She campaigned for him. I didn’t vote for him in 2016.”

Farah said, “She was there the whole time and now wants to kind of sing a new tune.”

Goldberg said, “I’m sorry, I find that this happens a lot and particularly with him because everybody’s like, ‘So, I might have seen something, and maybe I should have said something, but I’m out.’ I think it’s hard for people to understand the PTSD everyone seems to have, including us. We, as a nation, have PTSD, even the people who voted for him. I don’t think anybody really wanted to go through this idea of questioning our electoral system. I don’t think anybody ever thought, though we talked about it, what could happen if we’re not careful. So you maybe you voted for him, but did you vote for that? if that’s not something on your mind, you have got PTSD.” <Source>

It wasn’t Trump or his acolytes that politicized our nation’s premier intelligence and law enforcement agencies to spy on an opposition candidate, grossly interfere with two presidential elections, covered-up criminal wrongdoing, or promoted a demonstrably corrupt presidential candidate that is mentally unstable and cannot speak coherently after two minutes.

Whoopi Goldberg is the classic example of the multi-millionaire down for the revolution as she remains immune from the street violence and harmful outcomes of the policies she espouses. A poor man’s Oprah!

We are so screwed when faded celebrities promote progressive communist democrat themes to indoctrinate the nation’s white liberal women in the ‘burbs. 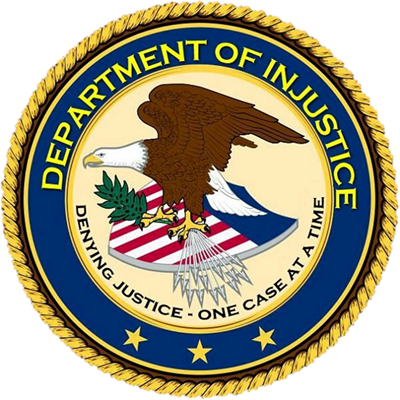 One wonders how Merrick Garland, then serving as a circuit judge of the United States Court of Appeals for the District of Columbia Circuit from 1997 to 2021, could be nominated to the Supreme Court by Barrack Obama? His performance as the 86th United States attorney general under the mentally incapacitated President Biden has been abysmal. He has not upheld federal immigration laws against illegal aliens and defied Supreme Court rulings. He has unconstitutionally inserted his department into local matters in violation of the 10th Amendment.

Amendment X: The powers not delegated to the United States by the Constitution, nor prohibited by it to the states, are reserved to the states respectively, or to the people.

It is outrageous to label American citizens protesting radical local school boards attempting to turn students into oppressors and the oppressed and fomenting racial division as domestic terrorists. There is absolutely no constitutional basis or precedent for the Department of Justice or the FBI to usurp the powers of local police or insert themselves in legitimate school board protests. Garland fails to mention any citation to a statute or other basis for federal jurisdiction that could support an indictment in any prosecution of a protester.

Even worse, is Garland suggesting that constitutional free-speech and assembly principles must yield when they represent “efforts to intimidate individuals based on their views?” Funny that Garland was extremely protective of the free speech rights of Muslims who openly spewed hatred and abuse on America, threatening to kill the infidels.

As we learned from the many attorneys who opined on Trump's January 6th speech, the Constitution's First Amendment protects speech unless it unambiguously calls for the use of force that the speaker clearly intends, under circumstances in which the likelihood of violence is real and imminent. Even actual “threats of violence” may not be actionable unless they are imminent.

In the final analysis, the Department of Justice has free-floating authority to investigate and prosecute crime or violence at the local level.

In recent months, there has been a disturbing spike in harassment, intimidation, and threats of violence against school administrators, board members, teachers, and staff who participate in the vital work of running our nation's public schools. While spirited debate about policy matters is protected under our Constitution, that protection does not extend to threats of violence or efforts to intimidate individuals based on their views.

[OCS: What a freaking joke. There have been allegations, mostly made by hyper-partisan progressives, reported in the media – but real violence or credible threats of violence do not seem to have been officially reported. Like the January 6th events, how long will it be before we see FBI provocateurs or their confidential informants fomenting violence? We see televised reports of true communist domestic terror groups like Antifa and Black Lives Matter murdering individuals and destroying property, yet A.G. Garland does little or nothing to intervene. And speaking of intimidation based on a viewpoint, isn’t that what Garland and the DOJ are doing by threatening law-abiding citizens engaged in constitutionally protected protests?]

The Department takes these incidents seriously and is committed to using its authority and resources to discourage these threats, identify them when they occur, and prosecute them when appropriate. In the coming days, the Department will announce a series of measures designed to address the rise in criminal conduct directed toward school personnel.

[OCS: Provide the reports of credible incidents. No legal authority exists for identifying, investigating and federally prosecuting local school board protesters. Any criminal conduct directed toward school personnel is a local, not a federal, matter.]

Coordination and partnership with local law enforcement is critical to implementing these measures for the benefit of our nation's nearly 14,000 public school districts. To this end, I am directing the Federal Bureau of Investigation, working with each United States Attorney, to convene meetings with federal, state, local, Tribal, and territorial leaders in each federal judicial district within 30 days of the issuance of this memorandum. These meetings will facilitate the discussion of strategies for addressing threats against school administrators, board members, teachers, and staff, and will open dedicated lines of communication for threat reporting, assessment, and response.

[OCS: An abuse of power, a waste of money, and a fraud on the people of the United States. Perhaps he needs to protect Senator. Krysten Sinema D-AZ) when she was confronted by progressive protestors in the bathroom?

After leaving Washington DC amidst tense budget negotiations, Sen. Kyrsten Sinema, D-Ariz., has been repeatedly confronted by constituents who are demanding that she stop blocking the Biden Build Back Better agenda and to pass immigration reform.

On Sunday, constituents, Deferred Action for Childhood Arrivals (DACA) recipients, and members of grassroots nonprofit Living United for Change in Arizona (LUCHA) confronted Sinema at the University of Arizona, which employs her as a lecturer in its School of Social Work.

At one point, several members of the group followed her into the bathroom and continued to list their demands while she was inside a bathroom stall, a video tweeted by the group showed.  <Source>]

The Department is steadfast in its commitment to protect all people in the United States from violence, threats of violence, and other forms of intimidation arid harassment.

[OCS: This is a lie. I wonder where this fool was when thousands of illegal aliens are committing crimes nationwide? Not to mention Antifa and Black Lives Matter?]

Now we know why Obama wanted Garland on the Supreme Court – he needed a sock puppet to follows his unconstitutional dictates and protect him like former Attorney General Eric Holder.

Garland must resign or be impeached in 2022 for violating his oath to protect the Constitution and uphold federal law.