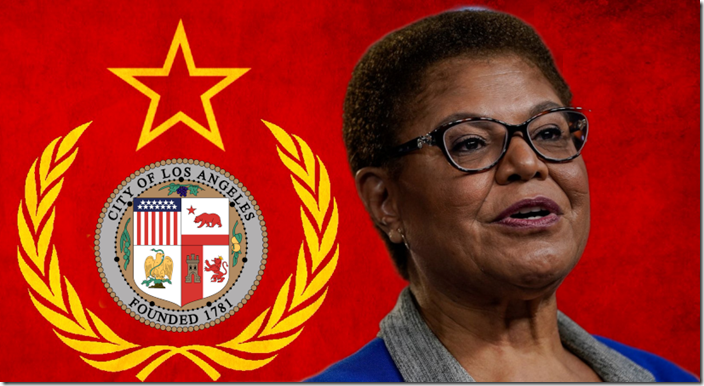 The 67-year-old Bass represents the 37th Congressional District, which encompasses some of the most minority and progressive neighborhoods west and southwest of downtown, including Crenshaw, Baldwin Hills, Miracle Mile, Pico-Robertson, Century City, Cheviot Hills, West Los Angeles, Mar Vista, and parts of Westwood, as well as Culver City and Inglewood.

On January 30, 2017, Bass took to the floor of the U.S. House to eulogize her “friend and mentor” Oneil Cannon, who was a leading member of the Communist Party USA. In its obituary for Cannon, the communist website People’s World cited his work as the Communist Party USA’s education director in the Southern California District and as a member of the Party’s Southern California and National Central Committees.

Bass has a decades-long association with the Venceremos Brigade, which is a communist front group founded in 1969 by Cuban dictator Fidel Castro and run by the Cuban intelligence service, the General Directorate for Intelligence (DGI).

Cuba’s communist regime used the Venceremos Brigade as a recruitment tool to co-opt American radicals as assets for intelligence gathering and long-term political influencing, according to a 400-page FBI report from 1976 based on information obtained from former DGI officials.

Bass made her first trip to Cuba with the Brigade in 1973 when she was 19. She would make at least eight trips to Cuba during the 1970s (i.e. during a decade in which the Vietnam War was raging, and the Cuban regime was actively assisting and hosting America’s Viet Cong enemies).

An October 1975 article in the communist Daily Worker identified Bass as “the leader of the Venceremos Brigade in southern California.” An undercover surveillance of Bass conducted by the Los Angeles Police Department in the 1970s also identified her as a brigade leader who “returned from Cuba to the USA bringing back propaganda literature.”

Bass has also been linked to a loose organization of radical Marxist-Leninists aligned with the Maoist New Communist Movement. The organization, called Line of March, was part of the Maoist “anti-revisionist” faction of Marxism-Leninism and was founded in Oakland, CA, in 1980 by Irwin Silber. Line of March associates operated their network in a deliberately clandestine manner, believing that this type of activism and party organizing needed to be done in secret without formal names or titles. They called themselves “rectificationists,” as a nod to their Maoist sympathies. Bass’s name and some of her associates are included in a document from the 1980s listing “Consolidated rectification forces.”

In the 1980-90s, Bass spoke regularly to various far-left organizations, including the Democratic Socialists of America. She helped organize a memorial service for South African Communist Party leader (and Stalin admirer) Joe Slovo in 1995. She was also a featured speaker at the 1993 West Coast Socialist Scholars Conference. The conference theme that year was “New Realities, New Identities: Socialism and Empowerment.” <Source>

Some of Bass supporters and radical progressive fellow travelers…

Save what’s left of Los Angeles. Please do not turn the City of Angels into an extended ghetto/barrio or homeless encampment where the social justice warriors are insulated from the consequences of the politicians they elect and the projects they fund.

We are so screwed when people vote class, color, and sex over decency and competence.