IS THE U.S. CHAMBER OF COMMERCE UN-AMERICAN?

I used to think that the U.S. Chamber of Commerce looked out for American businesses as it lobbied Congress to bring about conditions favorable to all businesses. Unfortunately, reality intruded, and I realized that the organization only lobbied for the largest businesses, many multi-national globalists. Small business and the United States be damned.

So I was not surprised that the Chamber is trying to trap the GOP into supporting the progressive communist democrats so the businesses the Chamber supports can feed off the massive spending bills put forth by radical Democrats. They do not seem to care that the GOP would severely impact their 2022 and 2024 electoral opportunities by supporting the Democrat’s profligate spending. Spending that will drive America further into inflation.

The U.S. Chamber of Commerce is pressuring House Republicans to save President Biden’s $1.2 trillion infrastructure package in the face of rising opposition from far-left Democrats.

A whip list the Chamber is using to build support for the package, obtained exclusively by The Washington Times, indicates it’s targeting 57 potential GOP members who might support a centerpiece of Mr. Biden’s domestic agenda. The Chamber hopes to flip enough Republicans to overcome heavy opposition from the 98-member Congressional Progressive Caucus, who say liberal priorities are being lost as Mr. Biden tries to sell his spending programs on the Hill.

The list of Republicans being courted is both ideologically and geographically diverse. The Chamber is pursuing centrists like Brian Fitzpatrick of Pennsylvania and staunch conservatives such as Kelly Armstrong of North Dakota, alike. The business lobby has long backed more government spending on the roads, bridges and other physical infrastructure featured in the $1.2 trillion package.

[OCS: Physical infrastructure is a very small part of the spending package which supports numerous Democrat initiatives that have everything to do with strengthening the Democrats and weakening the GOP. This is a classic Democrat bait-and-switch.]

In courting support for the bill, the Chamber is using a three-tier approach. Republican lawmakers who have already committed to voting for the bill make up the first tier. Eleven GOP lawmakers have so far pledged their support to the Chamber.

Five of those, including Reps. Adam Kinzinger of Illinois and Jamie Herrera Butler of Washington, voted earlier this year to impeach former President Trump for his role in the Jan. 6 riot at the Capitol.

Others, such as GOP Reps. David McKinley of West Virginia and Don Bacon of Nebraska, have taken stances directly opposed by Mr. Trump even if they did not support impeachment. Mr. McKinley and Mr. Bacon, for instance, backed Democratic efforts earlier this year to investigate the Jan 6. incident.

Apart from those who have outright committed to backing the infrastructure bill, the Chamber has identified 46 additional House Republicans that are “worth trying to flip.”

Of that figure, 24 lawmakers are categorized as being in “tier two.” These lawmakers have privately told the Chamber and its lobbyists they view the [infrastructure] bill favorably but have not come out in support.” Members include GOP Reps. Mike Gallagher of Wisconsin, Peter Meijer of Michigan and Anthony Gonzalez of Ohio, among others.

The 22 Republicans in the third tier, according to the Chamber, are seen as “further away from a yes [vote] but still worth trying to flip.” <Source>

Who are the 11 GOP traitors in the first tier?

The Democrats do not need any GOP members to pass their bills.

To the extent that the radical far-left communists are trying to bully the party into building more communist-friendly items into the spending package is a Democrat problem. If any GOP member should vote with the Democrats, they should be immediately be censured by the caucus, stripped of all committee assignments, lose all GOP funding, and primaried in 2022. 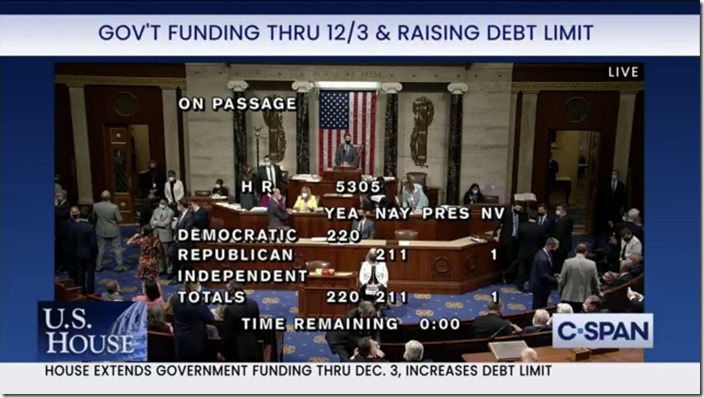 The House of Representatives voted this week along party lines to approve a bill that includes suspending the debt limit until after the 2022 midterm elections. The Senate plans to vote on the measure next week.

“We all agree, America must never default. The debt ceiling will need to be raised,” McConnell told reporters in Washington.

But the Democrats’ “reckless” spending plans, including one measure that’s been pegged at $3.5 trillion, and the way in which Democrats have been operating “on a partisan basis,” means that the party will have to figure out how to raise the debt ceiling without Republican votes, according to McConnell.

“The Democrats can deal with us all by themselves, because they have the House, the White House, and the Senate. So this is their responsibility,” said Sen. Rick Scott (R-Fla.), the National Republican Senatorial Committee chairman.

Companies like Nike and Disney who have no problem bowing to Communist China, benefiting from slave labor, and overlooking egregious human rights abuses such as organ harvesting and concentration camps, are typical U.S. Chamber of Commerce members. They are also in alignment with the progressive communist democrats. They are more about increasing market share, profits, and executive compensation than the survival of our Constitution, our nation, and democracy.

Let us vote for America and punish any GOP member that aisle-hops and supports the progressive communist democrats.