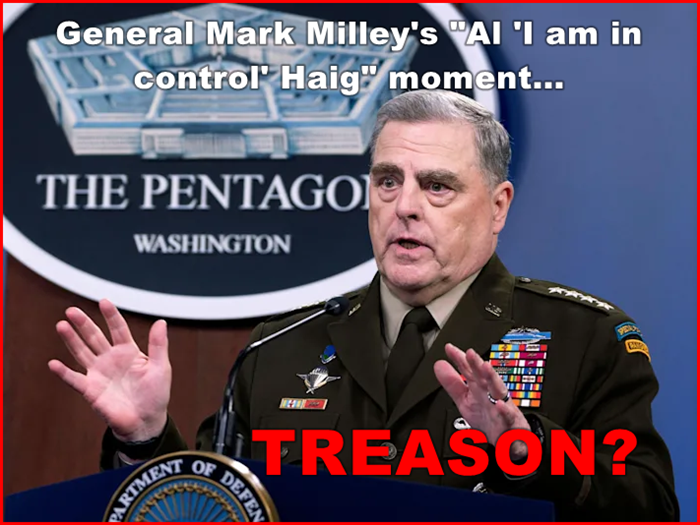 The charge should be a conspiracy to commit treason…

No matter what explanation is offered by President Biden, House Speaker Nancy Pelosi, and General Mark Milley, or various leg-humpers and lickspittles, Pelosi and Milley appear guilty of treasonous actions to deprive a sitting President of his constitutional authority as Commander-in-Chief.

Let us not forget that the conspiracy started with a civilian, Nancy Pelosi, who reached out to the military to question and/or curtail the Commander-in-Chief's ability to protect the United States from a nuclear-armed adversary. Milley's conversation with the commanders constituted specific action that confirms the conspiracy. And, Milley's conversation with the Communist Chinese could have precipitated a nuclear war if these sensed weakness.

At the very least, Milley should be court-martialed. If found guilty of the charges and specifications, stripped of rank, given a dishonorable discharge, and sent to the United States Disciplinary Barracks at Fort Leavenworth for ten years or more. Pelosi should be, likewise, expelled from Congress, tried for treason, and, if found guilty, remanded to the United States Penitentiary, Leavenworth, for ten years or more.

Peril, the book that further damaged a nation in decline…

There is little doubt in my mind that sensationalist and progressive journalists Bob Woodward and Robert Costa have done more to discredit the venerable military in the public’s mind than everything Trump may have said or tweeted in passing.

Another step toward chaos and anarchy that benefits the radical progressive communist democrats and their power-grab agenda.

Combined with the nation’s loss of faith in our premier intelligence and law enforcement agencies under the Democrats, there are few institutions left that are viewed by the American public as credible and trustworthy.

You cannot even trust the mainstream media or social media platforms to accurately convey the news of the day without canceling, censoring, or coloring with a narrative.

Which begs the question, why did General Milley not inform the Vice President of the United States of President Trump’s growing instability and likely incapacitation to fulfill his duties?

Alternatively, to request the Secretary of Defense to call a formal cabinet meeting to discuss the possibility of invoking an Article 25 transfer of legitimate power to the Vice President?

Or – honorably resign and then address the nation as a civilian?

Moreover, one can only wonder what General Milley thinks of President Joe Biden, who is clearly showing signs of progressive dementia and possibly amped up with short-acting drugs for his limited appearances? Or the wisdom of those who appear to be wielding power in the President’s name.

With the debacle in Afghanistan and the ascendancy of an unstable domestic political situation, the probability that other nations (China, Iran, Russia, North Korea, etc.) with positions adverse to American interests precipitating a dangerous confrontation rises exponentially.

For the first time in American history, there is some doubt about the stability and competence of the civilian-lead leadership of the military and its senior military commanders. Likewise, the senior leadership of our premier intelligence agencies appears to be similarly compromised.

The complete failure of the government under the Democrats is inching closer.