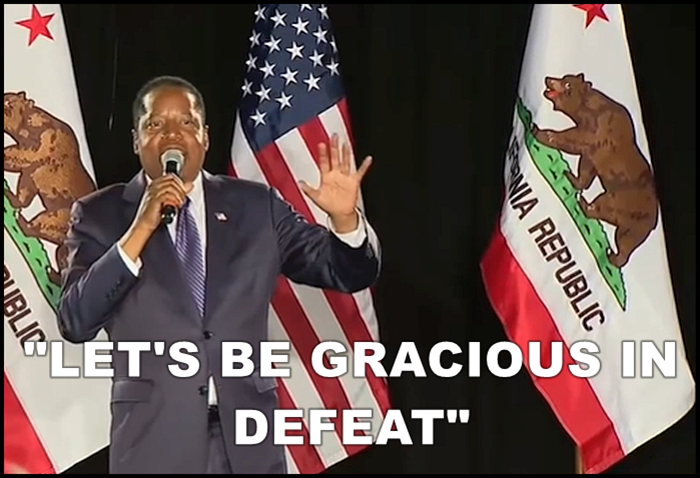 Elder was interrupted by booing when he mentioned Newsom’s name,  “As you know, my opponent, Governor Gavin Newsom..." Massive booing. "He then responded, “Come on. Let’s be gracious in defeat. And by the way, we may have lost the battle, but we are going to win the war.”

And therein revealed the weakness of the GOP – responding to months of vicious opposition lies and attacks with gentlemanly grace and respect. Promising it will somehow get better “next time.”

With the progressive communist democrats, there is no next time. They fight as if they face an existential threat and will do anything, including illegal and fraudulent activities, to win. And should they lose, they continue plotting, fundraising, and campaigning 24/7/365.

Newsom claimed that while a majority of Californians voted “no” on the recall, they actually voted “yes” to his administration’s goals.

No apology for Newsom’s piss-poor management of California. Increasing crime as a consequence of liberal policing, prosecution, and drug policies. Increasing taxes and fewer state services. Increasing homelessness with benefits attracting over 50% of the nation’s poor. Poor forest management policies exacerbate wildfires. Sanctuary policies destroying our institutions and safety nets, as predicted by the communists Cloward and Piven in their infamous strategy for destroying a nation. Lockdowns that crippled California's economy. Vaccine and mask mandates. Union corruption.

Even while being outrageously attacked by the mainstream media, Elder, portrayed as being “Trumpian,” and subject to headlines like  “Larry Elder is the Black face of white supremacy. You’ve been warned.” Elder refused to play the race card.

Sticking with the issues, Elder did not call out the Democrats for being racist by rejecting the historic opportunity to elect California’s first black governor. He humorously rejected racial allegations that would have been outrageous if said by a Republican.

Instead of hammering Newsom and the Democrats, Elder personalized the race and told his life story to anyone who would listen, concentrating on six or so core issues: homelessness, crime, housing, education, wildfires, and the water shortage. All the while, he was being demonized, denigrated, and disparaged by a mainstream and social media campaign that saw an influx of nearly $100 million and a massive “get out the vote” mobilization from the unions.

And how stupid was it to suppress the GOP mail balloting by suggesting that fraud was likely and you needed to deliver your ballot personally? How stupid not to demonize your opponent as he savages your life and reputation?

Look for the unions to claim their due.

The 2022 Democrat playbook has now been typeset: regardless of the actual issues and the damage done by the radical progressive communist democrats, the opposition candidate is a hater, a racist, a white supremacist, a homophobe, anti-science, a climate denier, a misogynist, a Trumpist, an avatar for Trump, or Trump incarnate. The pattern will be opposition-research-driven and personal.  Panic, payoffs, and payouts will be the highlights.

As others have noted, Larry Elder said he wanted to save California; instead, he saved Governor Gavin Newsom from being recalled.

With the 2022 election looming large and the GOP, especially the California GOP, content to sit back and wait a few months before the election to finalize their campaigns -- we can look forward to watching their rightful victory implode. And with it freedom and democracy.

The highlight of the election was Gavin Newsom and the Democrats has to spend $75 million to keep a job he already won -- and about 35% of Californians still flipped him the middle finger!