THE FACE OF SCIENTIFIC CORRUPTION?

Science is a free-for-all, a systematic methodology to observe, test, report, validate, or refute knowledge about our universe. A competition of ideas, from uncredentialled amateurs to highly credentialed “experts,” where the work of a single individual can falsify any generally accepted fact or finding.

And, peer-review is not a guarantee of validity, it is little more than a journal publication process that ensures the highest quality articles are selected and that those articles are complete and written in a clearly understandable manner. Journal articles and communications are not targeted to the lay public, they are targeted to journal readers who have the ability and skills to understand and utilize the knowledge being presented. Peer reviewers do not replicate, validate, or examine the underlying data or findings in-depth, unlike popular misconception.

However, we are now seeing the face of the political corruption of science. Where political ideology twists and contorts science to create a narrative that advances a political agenda. Where personal attacks often substitute for reasoned scientific discussion and debate over assumptions, research, findings, conclusions, and validity.

Some attacks coming from scientists protecting their life-long careers and funding against competitive challenges or from others simply questioning their work. Some attacks come from science's pseudo-celebrities who become media darlings as they are used by the mainstream media propagandists to advance a particular narrative, refute a contra-opinion, or generate audience ratings with sensationalism and controversy.

Moreover, those who want to characterize dissent as “hate speech” or contrarian approaches as “anti-science” or “disinformation” should be regarded as a blight upon science itself—suppression of academic freedom, free speech, and the competition of ideas.

In the final analysis, consensus and compromise are political processes, not a part of science or the scientific method.

Is this science to advance knowledge and understanding or science used to drive a political narrative? 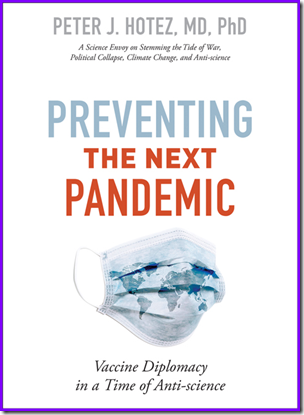 Preventing the Next Pandemic: Vaccine Diplomacy in a Time of Anti-science

Modern diseases and viruses have been spurred anew by war and conflict as well as shifting poverty, urbanization, climate change, and a new troubling anti-science/anti-vaccination outlook. From such twenty-first-century forces, we have seen declines in previous global health gains, with sharp increases in vaccine-preventable and neglected diseases on the Arabian Peninsula, in Venezuela, in parts of Africa, and even on the Gulf Coast of the United States. In Preventing the Next Pandemic, international vaccine scientist and tropical disease and coronavirus expert Peter J. Hotez, MD, PhD, argues that we can—and must—rely on vaccine diplomacy to address this new world order in disease and global health.

Hotez reveals how—during his Obama-era tenure as the US Science Envoy for the Middle East and North Africa, which coincided with both the rise in these geopolitical forces and climate change—he witnessed tropical infectious diseases and established vaccine partnerships that may still combat them up close. He explores why, since 2015, we've seen the decline of global cooperation and cohesion, to the detriment of those programs that are meant to benefit the most vulnerable people in the world.

Zeroing in on the sociopolitical and environmental factors that drive our most controversial and pressing global health concerns, Hotez proposes historically proven methods to soothe fraught international relations while preparing us for a safer, healthier future. He hammers home the importance of public engagement to communicate the urgency of embracing science during troubled times. <Source>

While science can inform decision-makers and suggest protective or preventative public policies, relying on the “experts,” many of whom concentrate on “the science” while overlooking human nature, economics, and the logistics of a global marketplace, has often produced unnecessary death and suffering – especially when contrarian viewpoints are ignored and dissent is quashed.

Perhaps we should demand a valid explanation from prominent scientists like Dr. Anthony Fauci, director of the U.S. National Institute of Allergy and Infectious Diseases, chief medical advisor to the president, and the media face of the pandemic, why science is being used to justify masking, social distancing, lockdowns, vaccine mandates, and vaccine passports – yet says nothing about the thousands of diseased aliens who are entering the United States without identification and medical testing and being transported to every corner of the nation?

Diseases, many virtually non-existent in the U.S. and which exist South of the border and elsewhere in the world, are making a comeback in the United States. So, how can we accept Fauci’s prescriptions when he has openly admitted to providing false and misleading information on masking to satisfy political concerns?

Politics is corrupting science, and the last thing we need to do is give legal cover to liars and charlatans who happen to be scientists.