THE SCHIFF SHOW WANTS YOUR MONEY

One of the greatest threats to U.S. national security is the type of partisan extremism displayed by Representative Adam Schiff (D-CA), the Chair of the United States House Permanent Select Committee on Intelligence…

Not only is Schiff a known liar and leaker, but he has knowingly and willingly perverted our national security apparatus to prosecute, or should I use the more honest term, persecute, format President Donald Trump. Not only did Adam Schiff and his staff collude to use the false narrative of a phony “whistleblower” to seek the unconstitutional impeachment of Donald Trump, but he veiled everything in secrecy. Holding classified hearings in a basement “star chamber” and refusing to allow the minority to fully participate in the proceedings.

One can only wonder what lies, distortions, and other perversions Schiff will promote as a member of the newly created fraud, the House Select Committee, on the January 6 Attack?

All the while neglecting the true threats posed by China, Russia, Iran, and North Korea. And speaking of Iran, it appears that the Biden Administration is assisting in revitalizing their economy and, again, setting them on the path to developing a nuclear weapon that can reach America. 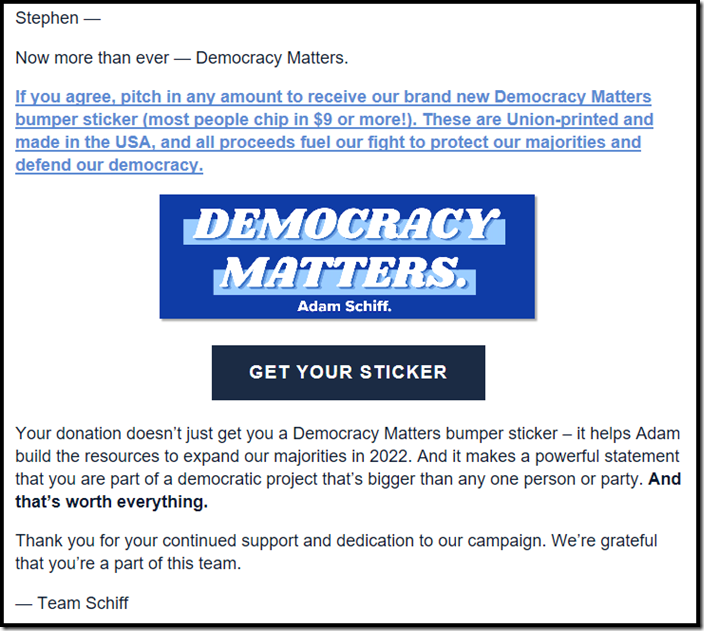 While Schiff is well-educated, Stanford, Political Science, and Harvard Law, I guess he does not see the irony in his bumper sticker. We live under a constitutional republic, not a democracy. Democracy is synonymous with mob rule because the 51% majority can mandate the behavior of the 49% minority. Must as the House Democrats are doing with their thin majority.

But then again, Schiff is often oblivious to obvious contradictions in his own words. 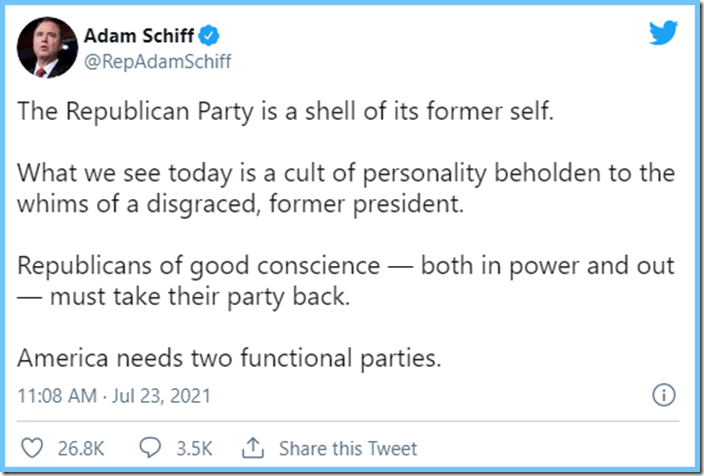 Former Navy SEAL responded, "We ain't perfect, but your party believes men can be pregnant, and "real socialism hasn't been tried." So there's that."

While the Republican Party may be a “shell of its former self,” it still hasn’t been infiltrated by communists and transmogrified into the Communist Party of America. Moreover, the Republican Party is not seeking to defund the police, releasing criminals into our communities and turning our children into racists and victims with critical race theory.

Despite Adam Schiff’s efforts to characterize former President Trump as being disgraced, other than a few mean tweets and a display of normal human behavior, Trump did more for America and Americans than any other modern president, Ronald Reagan included.

The Republicans did not put up an ineffective grifter with dementia as a president controlled by un-American communist Obamacons attempting to destroy America from within.

My own bumper sticker, and it is free to copy …

In my opinion, Adam Schiff is representative of an elite class of democrats who believe they have solutions to America’s problems while proving they are incompetent, malignant, and metastasizing.