INSPECTOR GENERAL PROGRAM IS A POLITICAL SCAM ON THE AMERICAN PUBLIC 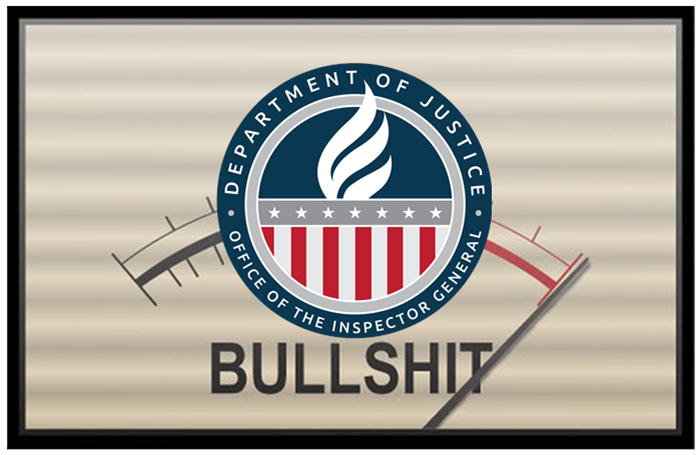 One might ask if the current report on misconduct by a then-senior FBI media official, Michael Kortan, for having numerous unauthorized contacts with the media and for accepting unauthorized gifts from members of the media, is simply another in a line of worthless media distractions meant to distract the public’s attention from more serious matters – like a fifth column attack to destroy America from within?

According to the Office of the Inspector General, the FBI official retired before he could be interviewed, and IG is not authorized by law to compel testimony. How effin convenient!

The Senior FBI Official retired from the FBI before being contacted by the OIG for an interview. When later contacted by the OIG for a voluntary interview, the Senior FBI Official declined to be interviewed. The OIG has the authority to compel testimony from current Department employees upon informing them that their statements will not be used to incriminate them in a criminal proceeding. The OIG does not have the authority to compel or subpoena testimony from former Department employees, including those who retire or resign during the course of an OIG investigation. <Source>

A well-known dodge that renders the Inspector General program worthless.

Consider Michael Horowitz, the Inspector General of the United States Department of Justice….

The IG’s report on the Foreign Intelligence Surveillance Act warrant applications against Carter Page was incomplete and inadequate for the task at hand, to root out procedural shortcomings, wrongdoing, criminal culpability, and referrals for prosecution.

It appears that the domestic spying on Carter Page was a pretext to obtain damaging political information on Donald Trump, his family members, the Trump campaign, and then the Trump presidency, was a coordinated effort from the White House and filtered down through the nation’s premier intelligence and law enforcement agencies.

To this day, only one person, FBI Attorney Kevin Clinesmith,  has been held responsible for altering a CIA document that indicated Carter Page was a CIA asset and his contact with Russians and others was lawful and known to the CIA.

Of course, Clinesmith appears to have been sacrificed to protect others higher up in the administration. The punishment for his egregious behavior that ruined Carter Page’s life and cost the government tens of millions of dollars -- 12 months probation, 400 hours of community service, and his lawyer’s license was suspended for one year. He should have gone to prison for at least 5 years.

Horowitz claims that his investigation was impeded because a number of individuals no longer worked for the government and were beyond his reach.

Department of Justice (DOJ) Inspector General Michael E. Horowitz announced today the release of a report examining various actions by the Federal Bureau of Investigation (FBI) and the DOJ in advance of the 2016 election in connection with the investigation into former Secretary of State Hillary Clinton’s use of a private email server (referred to by the FBI and DOJ as the “Midyear” investigation).

Conducted voluntary witness interviews to obtain testimony, including from Clinton and her senior aides, and did not require any witnesses to testify before the grand jury. We found that one of the reasons for not using the grand jury for testimony involved concerns about exposing grand jurors to classified information;

Did not seek to obtain every device, including those of Clinton’s senior aides, or the contents of every email account through which a classified email may have traversed. We found that the reasons for not doing so were based on limitations the Midyear team imposed on the investigation’s scope, the desire to complete the investigation well before the election, and the belief that the foregone evidence was likely of limited value. We further found that those reasons were, in part, in tension with Comey’s response in October 2016 to the discovery of Clinton emails on the laptop of Anthony Weiner, the husband of Clinton’s former Deputy Chief of Staff and personal assistant, Huma Abedin;

Granted letter use immunity and/or “Queen for a Day” immunity to three witnesses in exchange for their testimony after considering, as provided for in Department policy, the value of the witness’s testimony, the witness’s relative culpability, and the possibility of a successful prosecution;

Used consent agreements and “act of production” immunity to obtain the culling laptops used by Mills and Samuelson, in part to avoid the uncertainty and delays of a potential motion to quash any subpoenas or search warrants. We found that these decisions were occurring at a time when Comey and the Midyear team had already concluded that there was likely no prosecutable case and believed it was unlikely the culling laptops would change the outcome of the investigation;

Asked Clinton what appeared to be appropriate questions and made use of documents to challenge Clinton’s testimony and assess her credibility during her interview. We found that, by the date of her interview, the Midyear team and Comey had concluded that the evidence did not support criminal charges (absent a confession or false statement by Clinton during the interview), and that the interview had little effect on the outcome of the investigation; and

Allowed Mills and Samuelson to attend the Clinton interview as Clinton’s counsel, even though they also were fact witnesses, because the Midyear team determined that the only way to exclude them was to subpoena Clinton to testify before the grand jury, an option that we found was not seriously considered. We found no persuasive evidence that Mills’ or Samuelson’s presence influenced Clinton’s interview. Nevertheless, we found the decision to allow them to attend the interview was inconsistent with typical investigative strategy. <Source: DOJ OIG RELEASES REPORT ON VARIOUS ACTIONS BY THE FEDERAL BUREAU OF INVESTIGATION AND DEPARTMENT OF JUSTICE IN ADVANCE OF THE 2016 ELECTION>

Imagine not recording certain interviews, taking notes, nor challenging the appearance of potential co-conspirators' presence during the interview of a principal actor. And, where was the investigation of Loretta Lynch’s secret meeting with Bill Clinton before the Hillary interview? Or the usurpation of the DOJ's prosecutorial discretion, normally vested in Attorney General Loretta Lynch, by FBI director James Comey who unilaterally pronounced that presidential candidate Hillary Clinton could not be successfully prosecuted?

And then there was the Intelligence Community Inspector General Michael Atkinson…

How many people remember Michael Atkinson, the Intelligence Community Inspector General who was at the center of the Democrat’s Trump/Ukraine phone call hoax?

Even worse, Atkinson refused to explain to a Congressional oversight committee the reasoning behind the procedural change, when the change was actually made,  and why it appears that the change date on the form appears to have been backdated.

But Atkinson’s involvement in this nefarious affair did not end with a form change that appears to be motivated by partisan (Democrat) politics.

It appears that the IG’s authority is limited to suspected wrongdoing in the Intelligence Community and does not extend to any other agency or entity in the government-- certainly not the policy decisions of the President of the United States or the conduct of foreign affairs.

Yet, we find Atkinson accepting a report of alleged Presidential wrongdoing based on second-hand knowledge by an individual claiming “whistleblower” status. Not only did Atkinson accept a spurious report as credible, he improperly sent the complaint to Congress where it formed the basis of a corrupt investigation by Representative Adam Schiff (D-CA), the Chairman of the House Permanent Select Committee on Intelligence. Schiff, a known liar, and leaker, then used the “whistleblower’s” secret testimony as part of a House impeachment complaint that was constitutionally flawed.

What we now know is that there appears to be a tightly-knit cabal within the intelligence community, the National Security Council, and the Department of State that attempted to hide criminal wrongdoing by Joe Biden and his family members by creating a faux scandal that President Donald Trump attempted to pressure Ukraine to investigate his political rival for the presidency Democrat Joe Biden. The faux scandal was stage-managed by this dishonest Adam Schiff and subsequently led to Trump's unconstitutional impeachment in the House and acquittal in the United States Senate. The "whistleblower's" name and testimony remain "classified" under Schiff's direct order.

The Inspector-General program is a colossal failure with ongoing flaws that allow politics to materially affect its investigations, outcomes, and referrals to a politically corrupt Department of Justice.

What we need is an “Internal Affairs” agency that can investigate any Executive Branch agency, employees regardless of their employment status, seek subpoenas through a court process, and use the Grand Jury to compel testimony, offering qualified immunity when required.

We are so screwed—time for an Office of Internal Affairs staffed by competent investigators from state, not federal, agencies.